If music be the food of love then get ready to hit the Old Country Buffet. A wild new startup is about to unleash Populele, an electric Ukulele that will teach you how to play old Uke standards like Ukulele Lady, D’yer Maker, and Tiptoe Through The Tulips. The $149 ukulele has surpassed its goal on Indiegogo and is slated to ship this year.

The instrument has a 72-led fretboard that lights up to show you where to fret and how to play popular songs. A game mode lets you challenge yourself and you can download songs to play on the uke. Because it’s a smaller instrument there is a greater chance that you’ll learn something on the Populele and the technology, thanks to investment by Zhenfund and Xiaomi, the creators have perfected guitar and uke learning by machine.

“Other devices on the market are more like gimmicky toys with buttons or switches, while the Populele is a real uke with LEDs that light up onto the fretboard and teach you how to play. Traditional instrument manufacturers also haven’t kept up with trends in tech and social media, but our uke has a built-in record feature that allows you to save and share the music you’ve made, and an in-app music library where users can learn their favorite songs,” said CEO Bruce Zhang.

The uke featured in our event in China last year and it’s already selling in Asia. This is the first introduction of the uke in the US. 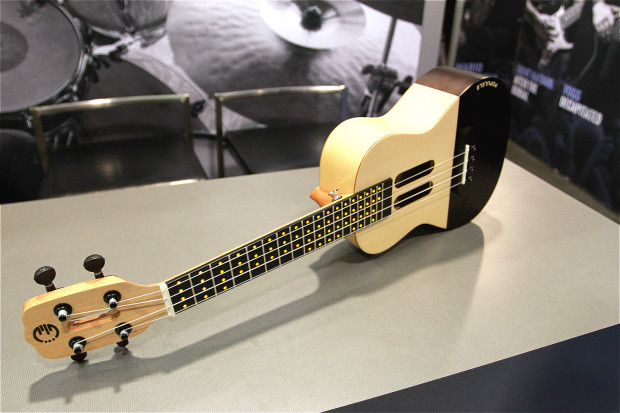 “For the musically inexperienced, the uke is basically the most approachable instrument out there — and nope, the kazoo doesn’t count,” said Zhang. “Ukes are portable and brighten any space with a sound that’s warm and inviting on an instinctual level. We’re not quite sure how the neuroscience of that works, but we don’t think the universal love for Israel Kamakawiwo’ole’s ‘Somewhere Over the Rainbow’ is a coincidence.”

Bottom line? If you believe that all the beaches are filled with peaches who bring their ukes along and in the glimmer of the moonlight they love to sing uke songs then you’re probably going to get your mitts on one of these.