Amazon has been steadily pushing its way into fashion over the past several years, with investments in its own private labels – from workwear to activewear – plus increased fashion ad spending and even its own trend-obsessed TV show, Style Code Live. Now the online retailer is looking to dole out its fashion advice to the masses, too, through a new feature called “Outfit Compare,” which is currently available to Prime members.

In the latest version of the Amazon shopping app, Prime members will find “Outfit Compare” in the sidebar navigation under the “Programs and Features” section.

This is the area where Amazon often rolls out its newer services and offerings, like Restaurants, Launchpad, Watch & Shop, Dash buttons and, more recently, its curated recommendations storefront dubbed “Interesting Finds.”

A minute later, you’ll get a response from an Amazon stylist who will tell you which outfit looks better on you. This determination will be made based on a number of factors, Amazon explains, including how the clothes fit, what colors look best on you, how they’re styled, and what’s on trend.

It’s suggested you take photos where your pose and background are similar, but Amazon says it’s fine if you take a selfie in front of a full-length mirror. The photos are only viewed by Amazon staff, the company notes. Plus, the photos can be deleted within the Outfit Compare in-app experience, which will remove them from the app and the copies associated with your Amazon account, if you’re concerned about privacy.

As to whose advice you’re receiving, Amazon claims its stylists come from varied backgrounds in the fashion industry, including retail, editorial, styling and creative fields, a FAQ about the new addition explains. 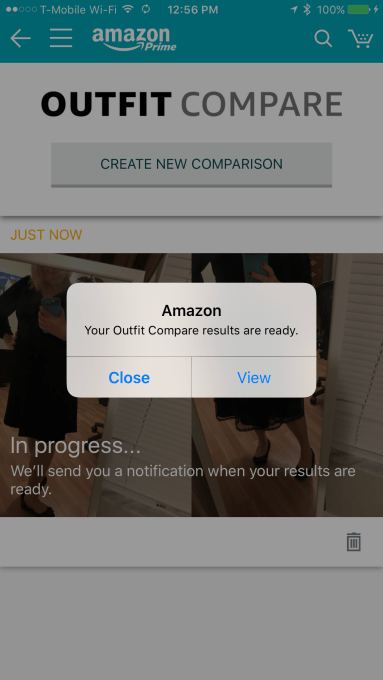 The feature itself is simple to use. You just snap a photo or upload the photos from your Camera Roll, then hit the button to submit them to Amazon. Considering how fast you get an answer back (in tests, it was well under a minute), it’s hard to believe this is not an automated in some way. However, we understand Amazon hired fashion specialists to work on this project.

When you receive your results, the outfit that’s best is rated on a “style scale” that shows how enthusiastic the response is about the selection. The options include “Definitely pick this one,” “We like this better,” and “It was a close call.” 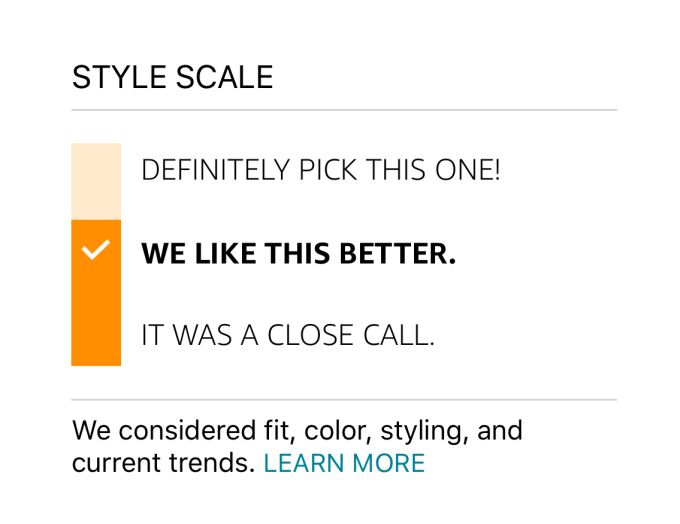 It’s not immediately clear how this feature will boost Amazon’s bottom line in the near-term. Instead, the addition may simply push more people to the app in order to receive fashion advice, as well as serve as another means for Amazon to acquire Prime members.

Non-Prime members will be able to see the Outfit Compare feature in their app, but will not be able to submit photos. Instead, they’ll be directed to sign up for Prime if they want to use it.

Amazon has been working to make its app a destination that expands beyond shopping. For example, earlier this week, it added its virtual assistant Alexa to the app for things like playing music, using third-party skills, answering questions, and controlling your smart home devices.

By collecting data in the form of personal photos from online shoppers, Amazon could learn more about users’ personal style in order to make better shopping recommendations in the future, if it wanted to go that route. It could also later enhance this feature with suggestions of ways to style the outfit using items purchased from its site. These are not confirmed parts of the company’s roadmap at this time, but they seem like reasonable directions for Amazon to head.

For the time being, however, Outfit Compare is just a fun toy tucked away inside the mobile application.

The feature first popped up on iOS devices on March 9th, and has today finished its rollout to all of Amazon’s customer base. An Android version is planned.

Amazon is not making a formal announcement about the feature’s launch.