Whether or not you like the so-called Internet of Things, the fact is that we do live in an internet of things, and every one of those things has a chip inside it. These chips are very advanced, of course, but also in many ways very traditional. Reduced Energy Microsystems wants to upend the status quo with a chip tech that could seriously improve the AI and computer vision capabilities of everyday devices — but that the competition is too set in their ways to adopt.

REM is one of Y Combinator’s latest picks, and the accelerator helped connect them with Draper Associates, which was impressed enough to fund a $2 million seed round.

Of course, chips are being improved constantly — there are new ones every year. But Intel or ARM, x64 or x86, Core or Ryzen, they’re all what’s called synchronous. That means there’s a clock somewhere that ticks forward millions of times a second, syncing all its little operational units together and producing the familiar “gigahertz” speed metric.

But in these CPUs, the overall speed is limited by the speed of the clock. What if a certain operation, like a simple logic step, is done in an even smaller fraction of a second than the clock duration? Part of the CPU is just sitting there, waiting. And while a fraction of a fraction of a second doesn’t sound like much, if it’s happening in thousands of places, millions of times, it starts adding up real quick. Multiple cores and threads address this issue somewhat, but can also multiply the severity.

If only there were a way to remove those operations from the tyranny of the clock… In fact, there is! Asynchronous processing lets calculations proceed at their own pace, saving time and power. Chip makers have known about it for a long time — but they’ve dedicated so many resources for so long to synchronous that there’s no chance of seeing one hit the market. REM plans to change that.

I spoke with Eleazar Vega-Gonzalez and William Koven, two of REM’s three co-founders, about the company’s hopes and claims.

“When you look at the embedded mobile space, you have this talk of big/little, right?” said Vega-Gonzalez, the company’s software head. “You have this wimpy ARM core that handles the easy things, then when the user starts doing something more complex, it switches over to the bigger, beefier core. That’s fine, that’s a good solution for now… but what we’re able to do is take one single core and dynamically throttle it down or up.”

That throttling goes to much greater extremes than existing chips, again due to the asynchronous nature; the same chip can operate at a fraction of a volt for some purposes, then ratchet up the power smoothly and on demand. 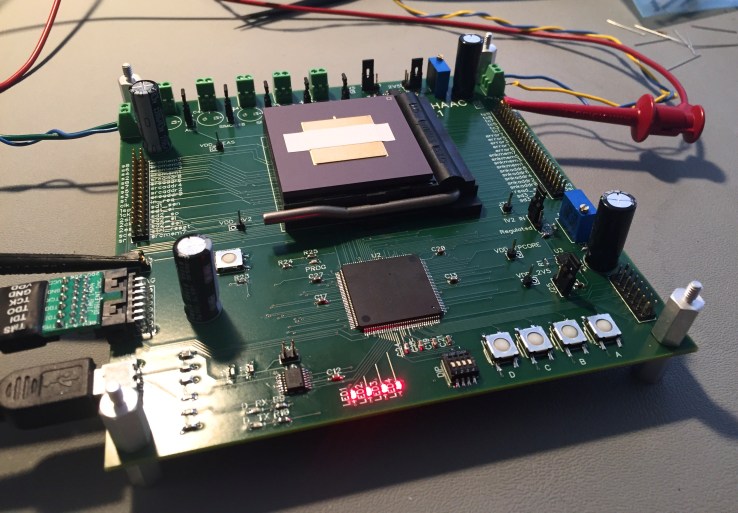 A prototype chip on a test board – the production chip is smaller, naturally.

But it isn’t some exotic fabrication process — the costs of which have inhibited startups in this space for years — nor is it yet another esoteric new discipline or architecture for coders to learn.

“We figured out how to use all the same design tools as the rest of the industry, and when we implement an ARM core, it still looks like an ARM core to the programmer,” said Koven, the CEO. “And users won’t see a difference, they’ll just see a part that runs better. What we do is all in between those two pieces.”

The result is a standard chip that can operate at super-low voltages so it can run the bare necessities needed to run, say, a home security camera. But when necessary, it can spin up and perform facial recognition algorithms more efficiently than a traditional chip of equivalent power. So you add capabilities while improving energy efficiency — by 3 or 4 times or more, depending on the application. 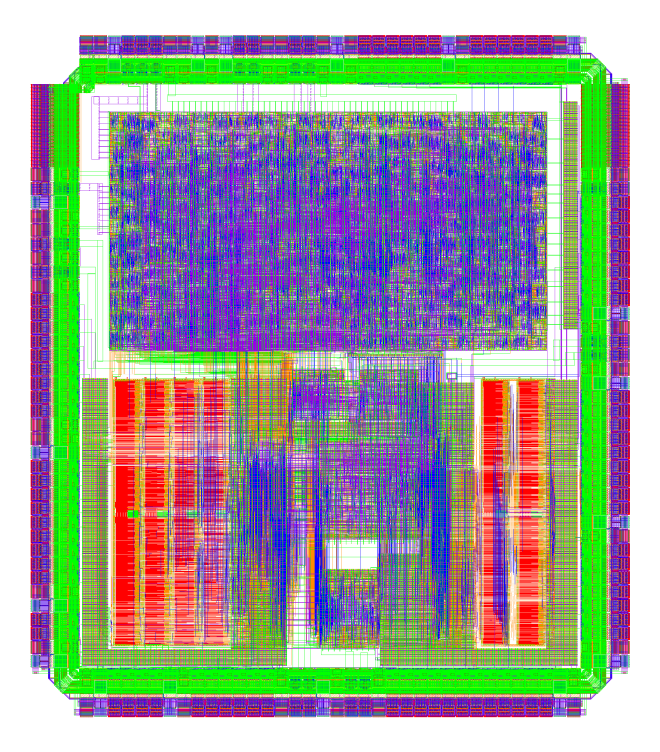 Perhaps it sounds a little too good to be true. If asynchronous chips are so cool, how come existing chip giants haven’t gotten in on the game? Koven, who worked at Intel for years, said they’ve purged it from their DNA.

“I spent a lot of time looking for a home for this at Intel,” said Koven. “Asynchronous is kind of a dirty word at Intel. It’s just too different from what they do as an organization. They’ve thrown out a lot of technologies like this because they’re different and scary.”

“It’s been tried a few times and historically what’s happened is you see these benefits but it takes way longer to get to market,” said Vega-Gonzales. “Something we’ve emphasized a lot is our internal tooling, so that we can move faster than the rest of the industry — which is exactly what lets software startups beat or exceed bigger companies.”

The company is looking at things like police body cameras, DVRs, drones, and security cameras, where manufacturers and developers are looking for a way to improve their offering with state of the art features while not breaking the bank or draining the battery. The work of creating the chips is largely done, and integration with products is what the company is testing now; they expect to have prototypes by the end of the year.

REM is Y Combinator’s first chip startup, but the program seems to have been helpful even if its focus is ordinarily more on software.

“There was kind of a consistent push to move quickly and focus on the business and customer relations kind of thing,” said Vega-Gonzales. Technical hardware startups, it should come as no surprise, are at great risk of whiffing the product side of things and, you know, the money-making piece.

“For Draper… they really believe in the future we’re trying to enable,” said Koven. “They see it’s going to take more than software to do that. And the semiconductor industry is stagnating in so many ways.”

It’s not an easy space to break into for technical, market, and monetary reasons; the idea of a startup designing and making its own fundamentally different chips isn’t an easy one to swallow. So one has to admire the chutzpah with which REM is happily marching to battle. They believe in their product and it seems really to be different from anything else out there right now; with luck and ingenuity (and a couple million bucks) they may be able to get the ball rolling with some customers hungry for change in a predictable market.