Engie, the Israeli startup that offers a car diagnostics device and app to enable you to better understand the health of your car, and is tied to a marketplace for local mechanics, sees its full U.K. launch today.

Priced at £14.99 for Android users or £19.99 for iOS, Engie’s Bluetooth device plugs into you car’s on-board computer and via the accompanying Engie app tells you what might be wrong with your vehicle, or what repairs might be required in the near future.

I’m told this includes anything from engine malfunctions, emission and fuel consumption, to battery condition and maintenance information. 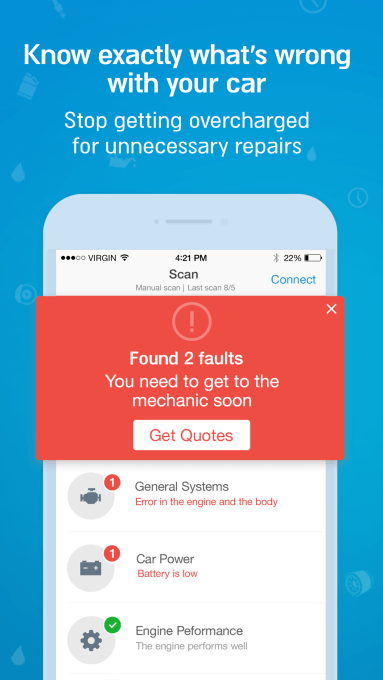 It then takes that information — thus making sense of the various data points that a car’s diagnostic “black box” already monitors — and connects you to the Engie after-market mechanic marketplace, which includes TripAdvisor-styled reviews and price comparisons for any work and parts required.

One caveat: The device claims to work with any car manufactured from 2002 except diesel cars, which are supported from 2005. The latter means that I’ve been unable to test Engie (yes, my car is old).

Once a specific malfunction is detected, the Engie app will alert local repair shops in its marketplace, who will assess the problem and send back a quote for required work. This also forms the basis for the startup’s business model: it takes a 6 percent commission on each job booked via the app.

Last June, Yarden Gross, co-founder and CEO of Engie, told me the inspiration for the startup came from his own feeling of being at the mercy of mechanics and the auto industry anytime something went wrong with his car.

He had no idea if he was being taken for a ride (pun intended) in terms of what he was being told needed repair or the cost of parts. Better technology and a more transparent marketplace — or, more specifically, Engie — was the answer.

Gross also said that, because each manufacturer or car model has different diagnostics interfaces and data points, producing a universal diagnostics card and app is non-trivial, involving a certain amount of reverse-engineering and gleaning of auto industry data.

Since launching in 2015, the company claims 100,000 registered users and works with 200 mechanics in Israel.