Dish’s streaming TV service, Sling TV, is today launching its new Cloud DVR feature to more customers through a “First Look” early access program. The DVR was first announced back in November, but has been in private beta for Roku users until now.

The feature works a lot like a standard DVR, but instead of storing recordings locally on a hardware device, they’re stored online in the cloud.

The best part about cloud-based storage is that, seemingly, you’d never run out of storage space for programs, assuming you paid for an expanded tier.

Instead, “First Look” customers pay an extra $5 per month for up to 50 hours of storage, with no expiration on those programs. When capacity runs out, the oldest “watched” recordings are removed first, to make room for others.

In addition, unlike traditional DVRs, Sling’s Cloud DVR lets you record multiple programs at the same time, without worrying about conflicts. Unfortunately, it’s not available on all channels, due to rights negotiations between Dish and the broadcasters.

To access the DVR, users will need to join the “First Look” program.

With “First Look,” Sling TV customers using Amazon devices will be able to test the Cloud DVR for the first time, alongside the earlier Roku beta testers. (During the beta, Roku users were offered 100 hours of Cloud DVR storage. The company says they’ll be able to keep this larger capacity despite the fact that the now-paid $5 per month service is reducing that to 50 hours. Lucky them.)

However, while Cloud DVR is now supported across several platforms, to initially gain access, “First Look” users must have an Amazon device to participate. (Or they have already joined through the Roku private beta.)

Explains Sling, Amazon users will need to own either an Amazon Fire TV, Fire TV Stick or Fire tablet device. But the Cloud DVR feature itself can also be used on a Roku player, Roku TV, Android TV or Android mobile device. 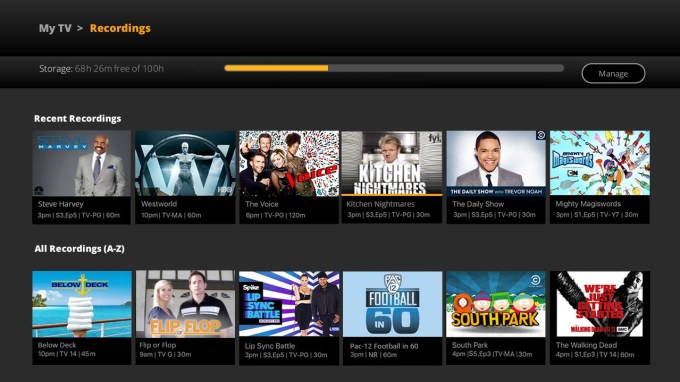 “Many customers have requested Cloud DVR since our launch, and as more consumers cut the cord, we know Cloud DVR is a must-have feature for many consumers,” said Ben Weinberger, chief product officer of Sling TV, in a statement.

“We also know some customers prefer to watch our 30,000 on-demand titles, and we don’t want to make them pay for a feature they won’t use. While other OTT providers force everyone to take Cloud DVR at a higher price, Sling TV continues to give our customers choice and control over their entertainment experience,” he added.

Weinberger is referring to Sling TV rival, Sony’s PlayStation Vue, which offers a “My Shows” DVR feature that lets you record hundreds of hours of programming, but with the limitation of saving shows for only 28 days. Unlike with Sling TV, the DVR is a core feature to the service, not an optional add-on. But the services are also priced differently and offer different channel lineups, so the DVR availability isn’t the only selling point for potential customers.

The move to launch the DVR more broadly comes at a time when the streaming TV market has been heating up. Newer entries including AT&T’s DirecTV NOW and YouTube TV have increased competition. AT&T’s service doesn’t have a DVR option at present, but execs have said that the feature is on its roadmap. YouTube TV, meanwhile, is launching with a DVR that never runs out of space, the company said.