Google’s messaging strategy can be confusing, but if there’s one thing that’s clear after today’s Cloud Next keynote, it’s that the company is doubling down on the idea that Hangouts is its enterprise product and Allo/Duo are its consumer communications apps.

But now there are a couple of new wrinkles in the Hangouts story. Google is splitting Hangouts into two: Hangouts Chat, which is clearly gunning for Slack, and Hangouts Meet, which is all about video and audio communications. Those two are basically the enterprise counterparts to Allo and Duo.

The current Hangouts app isn’t going away just yet, but it won’t last forever, either. 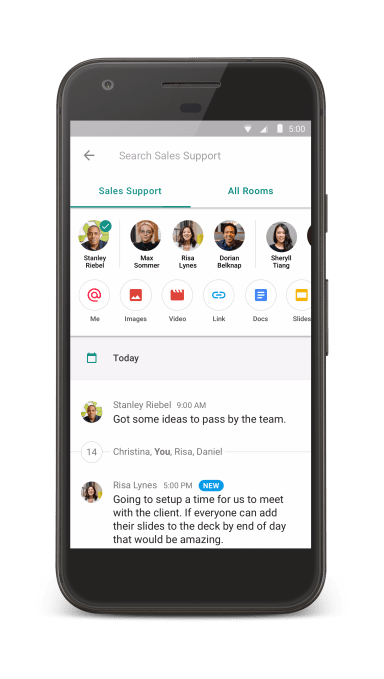 The new Hangouts Chat then is all about team messaging. That means the application, which will be available on Android, iOS and the web, will offer rooms (yep — just like Slack).

It’ll also offer threaded conversations, something that’s a bit of a holy grail inside chat apps and that Slack hasn’t quite perfected yet, either. Those threaded conversations, Google’s director of product management for Drive Scott Johnston told me, are the reason why launching this new Hangouts chat experience took so long. “We learned a lot from threading Gmail,” he told me. “But it’s also a constant tuning because everyone is just so trained in iMessage and the flat ones. That makes sense in lightweight chat, but when you need to be able to drill in, it breaks down.”

Google’s own services are, of course, deeply integrated into the service, too. When you share a file with a room, all of the members automatically get access to it, for example. But Google is also bringing in third-party services, as well, and launching the Hangouts platform that will allow developers to bring in bots and lightweight scripts (based on Google Apps script) to perform different tasks. There will also be advanced bots from the likes of Asana, Box, Zendesk and ProsperWork at launch, with more coming in the future.

Google itself is launching a bot that makes it easier to find meeting times to showcase what these integrations can look like.

In addition to all of these new features, Hangouts Chat is also getting advanced search and the ability to filter conversations by file types. 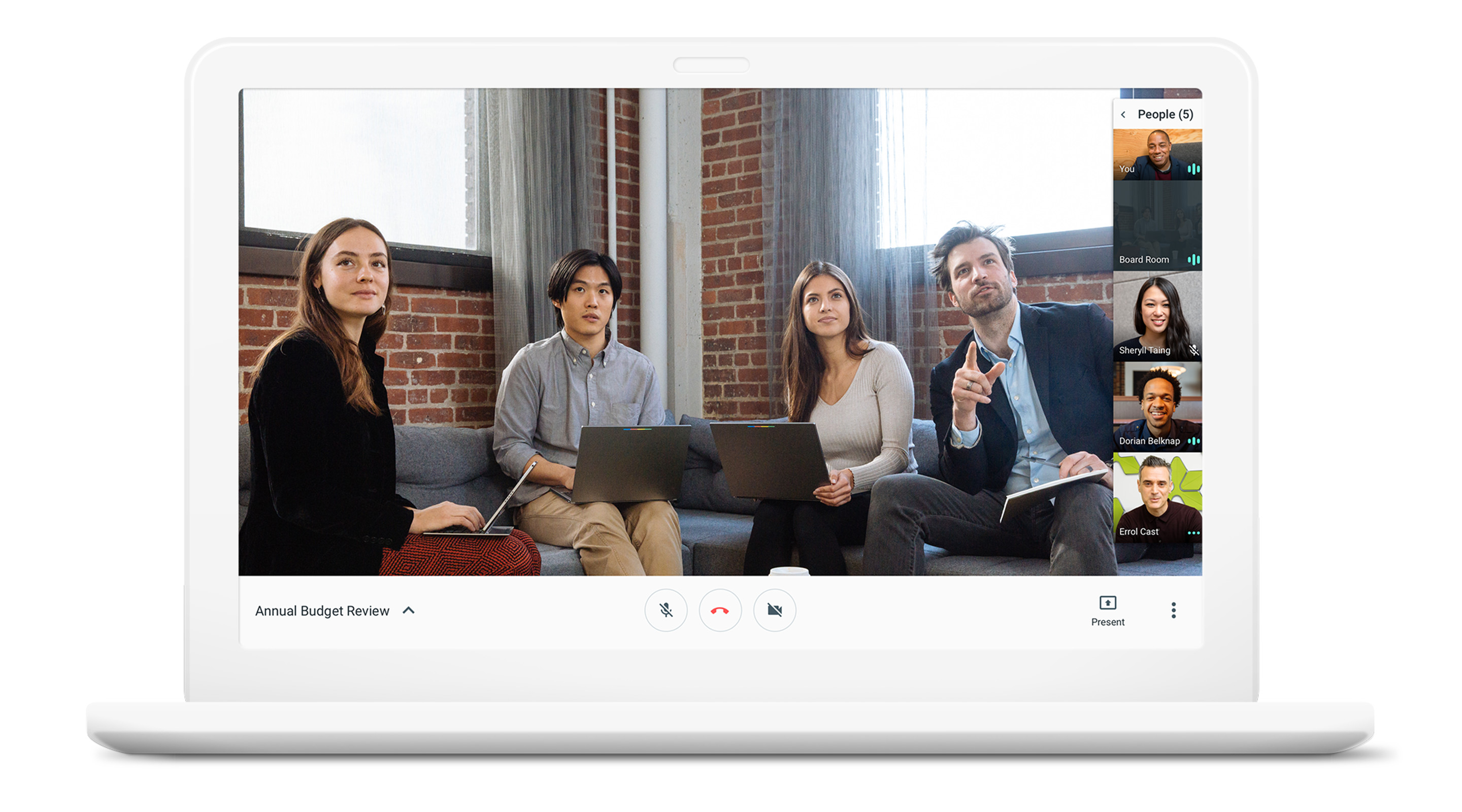 Hangouts Meet, which made a brief appearance in the Google Play store last month, is all about making meetings easier. “One of the biggest things talking to our G Suite customers about Hangouts meetings is just how people are spending so much time on getting into the meetings,” Johnston said. “We’re a big supporter of automating the full meeting life cycle from agenda to follow-ups. But meeting value today is destroyed by time-to-start. It takes so long to simply get started.”

Unsurprisingly, Meet then tries to make getting into a meeting as easy as possible. Ideally, it’ll just take one click and you’re in your meeting, whether that’s a video or audio one.

It’s a full rewrite of the Hangouts meeting experience and will work without any plug-ins (and Google also promises that it will be lighter on the processor, too, and won’t eat into your battery life or make your laptop’s fans spin at full speed). The team also cut down on the code size and promises that meetings will load “instantly.”

There are also a few new features in Meet, including recording, for example, and the maximum number of participants is now 30. The service is also integrated with Google’s Chromebox for Meetings.

By default, every Meet meeting will also come with a dial-in number — and that number has the PIN code attached to it, so you only have to click on the number to dial in and it’ll handle the PIN code for you automatically. 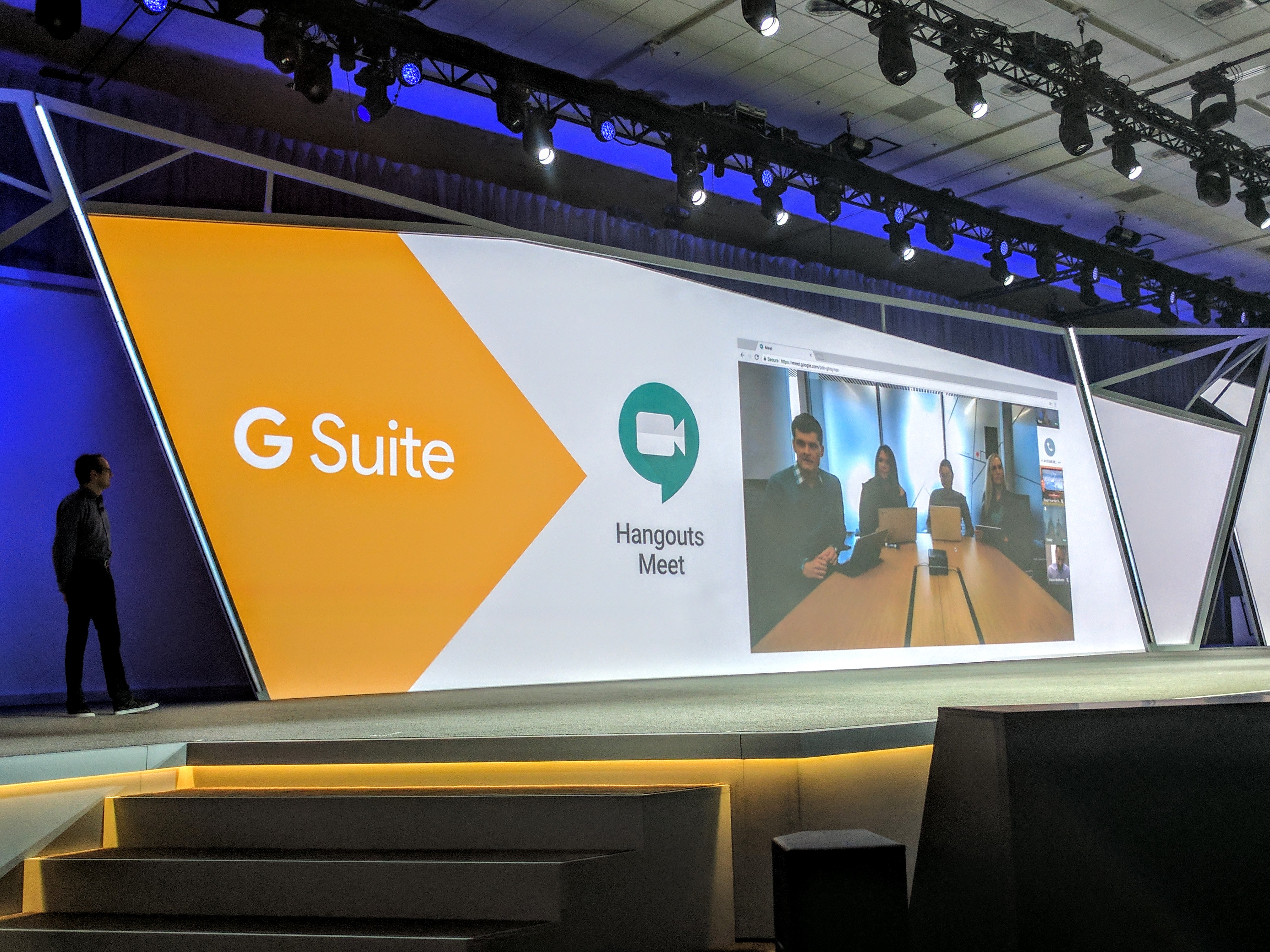 So why split Hangouts into two? “What we found in talking to our enterprise customers, they really thought of two key entry points,” Johnston said. “One is: just get me into the meeting — I want to jump on and have a conversation. And they want to respond quickly to conversations that are going on within their team. So there are two app entry points, but they are the same family.” Over time, though, Chat and Meet will supersede Hangouts.

While Chat and Meet are focused on business users, Johnston acknowledged that there is always an overlap between consumers and business users. Regular Gmail users often want to be productive, too, after all. “We know people use Hangouts for work in the consumer space, so it’ll be offered for them,” Johnston said.