Chowbotics Inc. has landed $5 million in a Series A round of venture funding to develop what it’s calling food service robots. These are machines designed to prepare food in restaurants, cafeterias and hotels, as well as food courts in airports, malls and hospitals. The company’s flagship product, Sally, is a salad-making robot that uses 20 different food canisters to prepare and serve more than 1,000 different types of salads.

According to Chowbotics CEO and founder Deepak Sekar, the company has finished pilot production of Sally and is ready to bring the robot to market this spring. Asked whether a version of Sally for home use is in the works, Sekar said not now — and likely not for another five or more years. The CEO explained:

“Back in the 60s you had computers the size of a room that were astronomically expensive. That was the main frame. Then you had the mini-computer which was more accessible for businesses in the 70s. It took another decade or so for the personal computer to come around. Right now, the food industry is facing a mini-computer phase where robots have come out of the factory and are going into commercial kitchens.”

A number of pilot customers have agreed to trial Chowbotics’ salad-making robot. Sally will be used in pilots at the Campbell, Calif.-based Italian restaurant Mama Mia’s, and the co-working space Galvanize in San Francisco, as well as the corporate cafeteria at H-E-B Grocery Co. in Texas this spring.

While Sally can be used in the kitchen at a restaurant where servers might then walk salads out to customers, the company is also making a version of the device that can operate like an automat, with a touchscreen for ordering up a salad and a credit card reader. Sally should serve well in airports, gyms, hospitals and other venues that operate around the clock and want to offer healthy food at any time.

Because salads made by Chowbotics’ robot can be precisely measured, customers will know exactly how many calories are going into the food they order. Sekar is hoping that fast food and quick service restaurants will start using Sally to attract more health-conscious patrons. Most fast food chains can only offer a few different salad types, he said, and those tend to be over 400 calories each. Sally users can rely on Chowbotics-provided recipes, or key their own recipes into the robot. 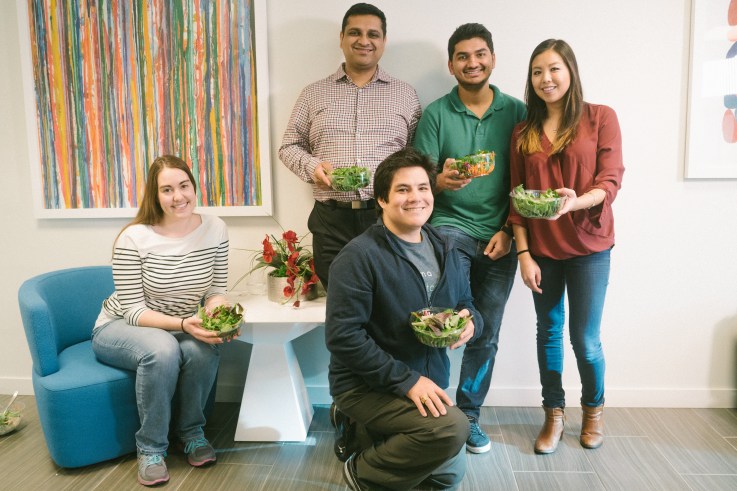 Early employees of Chowbotics with salads made by Sally, the food service robot.

Chowbotics’ newly raised capital will go toward hiring, manufacturing and to develop new robots that can prep a range of other foods. Sekar said breakfast, burritos, tacos and certain other types of ethnic foods make sense. Investors in Chowbotics included Foundry Group, Techstars Ventures, Galvanize Ventures and the Geekdom Fund. The startup, which is moving to Redwood City, Calif. next month, is an alumnus of the TechStars Austin accelerator, where it was previously known as Casabots.