iflix, a Netflix-like service that covers Southeast Asia and other emerging markets, has closed $90 million in new funding to expand its service into new countries.

The round was financed by international cable firm Liberty Global, Middle East and Africa-focused operator Zain and existing backers Sky, venture builder Catcha Group and LA-based Evolution Media Capital (EMC). Sky made a $45 million investment last year, while Catcha Group and EMC provided an initial $30 million to get the project off the ground in 2015.

There could be more money coming soon. Malaysia-based iflix confirmed that it is in negotiations with other investors with a view to enlarging this round beyond $90 million. That’s ties into a previous TechCrunch report last year in which we revealed that the firm was shooting for a $150 million raise to finance wider global expansion plans.

TechCrunch understands that this new funding values the iflix business around the $500 million post-money mark, according to a source with knowledge of the round. iflix declined to comment. A public filing from investor PLDT made last year shows the firm was valued at $450 million following the investment from Sky.

iflix initially made its name in Southeast Asia where it specialized in a more local approach than the global streaming giants like Netflix and Amazon — in terms of programing, payment options and partnerships with local mobile operators — but has since pushed on beyond the region. The service is officially available in nine countries in Asia, most of which are in Southeast Asia, and parts of the Middle East and Africa via ‘iflix Arabia,’ a joint venture with Zain, the telco which covers seven countries across both regions.

While Amazon and Netflix pride themselves on Western-focused programs like House Of Cards or the Top Gear reboot, iflix offers a more local focused catalog to give a different appeal. It is also cheaper. The price varies market to market, but in Thailand, for one, iflix costs 100 THB per month ($2.85) versus 280 THB ($7.99) and upwards for Netflix membership.

ifix isn’t providing details of its userbase at this point, but in an interview with TechCrunch, CEO Mark Britt pointed to some numbers that show promise. He said the service has signed up over one million users in Indonesia, while in Pakistan, one of its newer launches, it has nabbed 100,000 registered users within its first month of business.

Update: iflix has since confirmed that it has five million registered users.

The company’s switch from a regional player to a larger business with major international ambitions has necessitating some internal changes, however. This month, iflix let 50 of its 650 staff go as part of an apparent realignment, a source with knowledge of the business told TechCrunch.

iflix confirmed the staffing change in a statement.

“We undertook a restructuring of the business, removing approximately 50 roles locally in Malaysia last week, which will be replaced by 200 new roles over the next 9 months. They involved a variety of circumstances, including but not limited to shift in some HQ roles to Singapore and other centralized roles at Malaysia HQ to in-region (MENA & Africa) and local operations in various markets,” a company representative said. 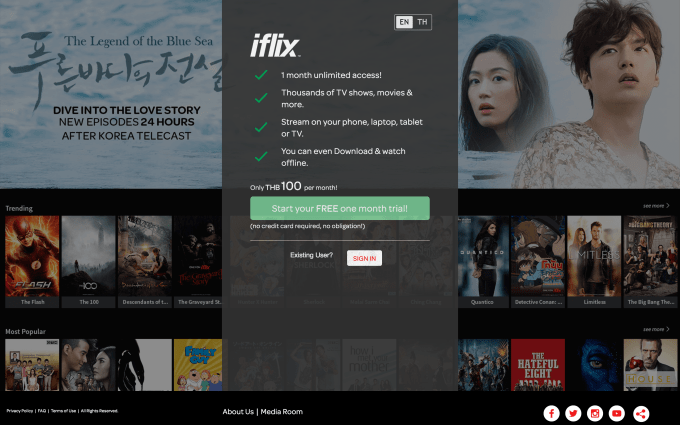 While iflix may have bitten off a little more than it was immediately ready to chew, Britt is confident that there is an spot to play for despite both Amazon and Netflix expanding their services globally, and local competition from legacy broadcast players.

“There’s a clear role for local and regional players willing to run local content or localized content,” he told TechCrunch. “Amazon and Netflix are leading players, they offer a fantastic experience, but for the mass market we are seeing a clear opportunity for locally orientated players. The question is just execution complexity.”

With major names like Liberty Global and Sky on board, iflix has gained the backing of members of traditional entertainment who are keen to expand their reach through the growth of mobile, and mobile internet access, in emerging markets.

“iflix is a truly innovative partner,” Andrew Griffith, Sky Plc group chief operating officer said in a statement. “In the last year since Sky joined as a shareholder, we have seen the company surpass its milestones, including consolidating its leading market position in Southeast Asia and expanding its footprint into new regions. We are pleased to continue our support, as iflix moves on to the next stage of growth, making its world class service available to millions of consumers in MENA and Africa.”

Beyond expansions into new markets, iflix is also working on its own original content. First announced last year, Britt said there would be more details on upcoming programming in the near future as iflix looks to evolve from challenger into established broadcast medium.

“There are currently more than 2.5 billion people with smartphones in emerging markets who have a passion for cultural influences from around the globe and want access to the best entertainment content available easily and reliably. It is our aim to make iflix available to each and every one of them,” Britt added via a statement.