While the European Commission continues to work through a stack of antitrust complaints against Google and its dominance in the market across areas like search, advertising and mobile, one of the groups leading the charge against it has struck again.

The Open Internet Project — a consortium that says it represents some 400 companies and groups in Europe and elsewhere, including (as of today) members of another organization once started by Microsoft called ICOMP, Axel Springer, Getty Images, and Hubert Burda Media — said that it had filed a second complaint against the search giant aimed specifically at its Android operating system, how Google provisions it with OEMs, and the impact on app makers.

In particular, if handset makers or carriers want to develop their own “forked”, unofficial version of Android, this hinders market distribution and competition for app developers, since these versions are no longer allowed to carry the Google Play Store, the primary distribution platform for Android apps. It’s calling on the EC to “prohibit Google from continuing its tying practices relating to Android in order to foster an open competitive environment in the internet ecosystem.”

Contacted for a response, Google said that it declined to comment.

App stores are a very big business collectively, and individually for those developing apps for them. A recent report from App Annie noted that in 2016 app publishers were paid over $35 billion across the iOS and Android app stores, up 40 percent on 2015 and covering some 90 billion downloads.

(But perhaps in favor of Google’s argument that it’s not hindering this market, App Annie also noted that when third-party Android stores were included in the analysis, revenue increased to almost $89 billion. This is largely because of the success and popularity of forked app stores in China, however, rather than the situation in Europe, which is what OIP is trying to address here.)

The aim, nevertheless, with the new complaint is to plug what appeared to be a hole in competitors’ full-court press against Google from a regulatory point of view.

“Android plays a crucial role in the internet ecosystem,” the OIP writes in a summary of the complaint. “Currently, Google dominates nearly every segment of the internet value chain. The combined control over Android, Chrome, Search and crucial content services such as YouTube, Google Maps and Gmail puts Google into a nearly unassailable position of dominance. Putting an end to Google’s anti-competitive tying practices is necessary to enabling competition in every segment of the value chain and to keep Google under competitive pressure to further develop its products and services and invest in innovation.

“Google holds a dominant position in several markets relating to Android. In particular, we agree with the Commission’s preliminary findings that there is a separate market for non- licensable mobile operating systems (“OS”) which Google dominates as it does not compete with Apple. Google also dominates the market for the provision of general search services and, in addition, with Google Play Store the market for Android App stores. There are no alternatives for Android users to the Play Store since Google’s proprietary Apps – as well as literally millions of other Apps – are available exclusively through the Play Store.”

This is how they see the landscape and why it essentially locks app makers out of a free market: 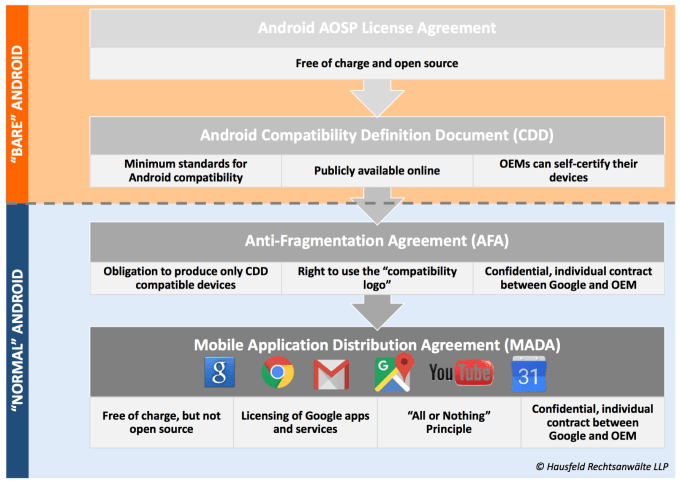 Thomas Hoppner, the OIP’s legal counsel, tells me that while there have been a number of other complaints about different aspects of Google’s business, this is the first that “takes into consideration what impact Google’s dominance has on content providers and the entire ecosystem.”

One previous high-profile complaint related to today’s newest complaint is a Google Android case (Case AT.40099) that was originally brought by Fair Search. This has been with the EC for a couple of years, claiming Google’s practices are anticompetitive for device makers and carriers.

The latest on this is that the Commission sent Google a statement of objections in 2016, and Google has been responding to that.

This earlier case does address bundling to some extent but is more about what manufacturers are required to include when building devices, and how this shuts out the possibility of including other Google-owned apps.

“While the new complaint is linked and aligned with what the Commission is already investigating, it’s adding some new perspective and strategically keeps up the pressure and shows that these cases are not over and done with, and not forgotten,” Hoppner added.

This is the second complaint from the OIP, which is listed as a party in the search case against Google (case AT.39740). Hoppner said he expects a final decision in that case to come out in Q2 2017.

In all, Google is facing around 30 cases in Europe over different aspects of its business and complaints that it’s creating an anticompetitive environment.

These are not just at the European level: in Turkey the company is also being investigated by regulators in relation to a complaint from Yandex (the Russian search company) that preloading unforked versions of Android on phones effectively locks out companies like Yandex, which has a suite of apps that match many of those made by Google, from occupying a preloaded position on those devices. Turkey is one of Yandex’s biggest markets outside of Russia, so this is not a light matter for the company.