After a year of rumors, YouTube is finally drawing back the curtain on its latest play for entertainment industry domination — a live TV service.

At the company’s Playa Vista offices, a crowd of roughly 100 journalists settled into tables and chairs arrayed in the company’s hangar-like foyer to the strains of “Video Killed the Radio Star” and “Coffee and TV” to hear the news. (Seriously, YouTube’s music game is on point).

Distinct from YouTube Red, the new service, YouTube TV, which has been in the works for years at Google’s internet video behemoth, has quietly been inking contracts with media companies to distribute their content on its TV service.

As previously reported by The WSJ and Bloomberg News, a steady drumbeat of leaks had already set the tone for what will be offered by the service.

According to Bloomberg, YouTube had been talking with all of the major networks to roll up content. CBS was the first major TV network to sign on to the service, with all of the other studios also roped into discussions including 21st Century Fox, Comcast’s NBCUniversal and Disney, which owns ABC, ESPN and others.

Today, YouTube confirmed how its channels will be bundled and priced. 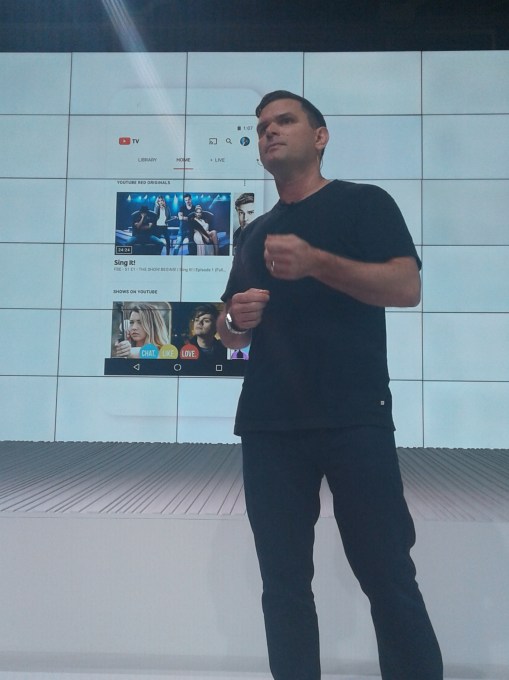 The service is fairly low-cost, with a family of six accounts available for $35 per month, and no long-term contract required. Earlier reports from The Wall Street Journal set pricing for the service somewhere between $25 and $40 per month.

However, it will only launch in markets where it can offer full, live local broadcast feeds, like L.A., New York and Philadelphia.

“We decided to create an offering that would give them all of these can’t-miss live moments,” said YouTube Chief Business Officer Robert Kyncl of YouTube TV’s offering.

He explained that YouTube has partnered with all of the broadcast networks in order to offer “comprehensive national coverage with ABC, NBC, CBS, Fox all included.”

Kyncl said that could change, as YouTube is “always in conversations” with potential partners. 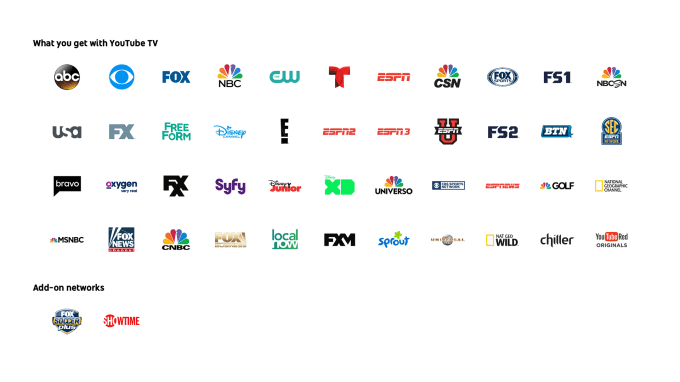 For sports fans, the service includes national coverage from ESPN/ESPN2/ESPN3/ESPNU, FoxSports, FS1, FS2 and NBC SportsNet. Also offered are regional sports networks from Fox and Comcast, SEC Network, Big Ten and ESPNU. Fox Soccer Plus is available as an add-on.

In addition, YouTube TV includes YouTube Red’s 28 original series. This could make it more appealing to a younger demographic looking for more content than offered by the ad-free subscription offering YouTube Red — a service that was recently impacted by the loss of one of its biggest stars, PewDiePie.

“It’s a testament to the way that YouTube works with partners of all sizes that we’re able to offer up the lineup that we have today,” said YouTube Chief Product Officer Neal Mohan. “We feel we’re in a great position to reinvent the way TV works. No other company in the world has more experience serving high-quality video over the internet, high-def streaming, apps that don’t crash and seamless integration with mobile and web.”

YouTube TV will challenge traditional cable TV players by offering a DVR that never runs out of space, and that’s capable of simultaneous recordings. Cloud-based DVRs have become table stakes in the live TV market, as competitors like Sling, Vue and DirecTV Now offer this feature. or have it planned.

But YouTube TV will offer each account its own personal DVR, as well as its own tailored recommendations, shown when the app is in portrait mode. These suggestions are personalized based on what you’ve watched and recorded. 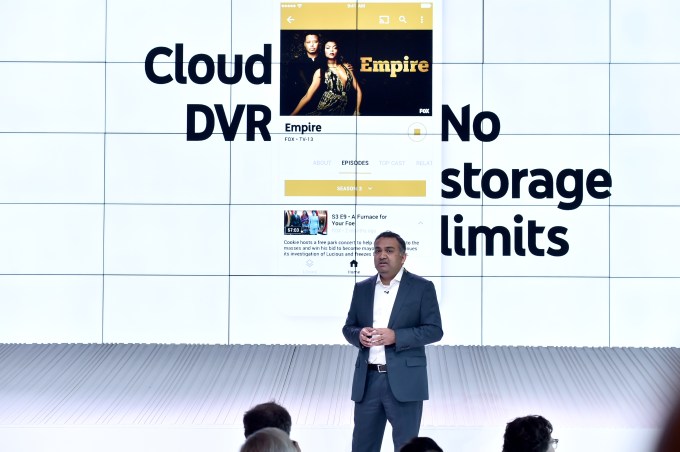 When you launch the app, you can explore a visual TV guide, and quickly scan what you want to watch by flicking through channels with your thumb.

The app is separated into three sections — live, library and home. Live is where you’ll find the broadcast content; from here you can tap to watch the show or tap a plus icon to begin recording. At any time, you can “cast” YouTube TV’s content to your television, as you can with Chromecast.

Search is available, as well, including the ability to search by themes, like “time travel,” for example, which would return TV shows and movies where time travel is integrated into the plot.

You also can command YouTube TV by voice, thanks to integration with Google’s connected speaker product, Google Home. (The company attempted to demo this on stage, but it failed.)

If the product gets buggy — something that’s often the case at the launch of new streaming products — you can text or voice chat with customer service from the app.

Social is integrated into YouTube TV, too, with the “community” tab previously introduced on top creators’ channels becoming a part of YouTube TV’s service.

Both Google and the networks will sell the ads on the service, Google said. And everything on the service is ad-supported, unless you subscribe to YouTube Red and are watching YouTube (not network TV) content. 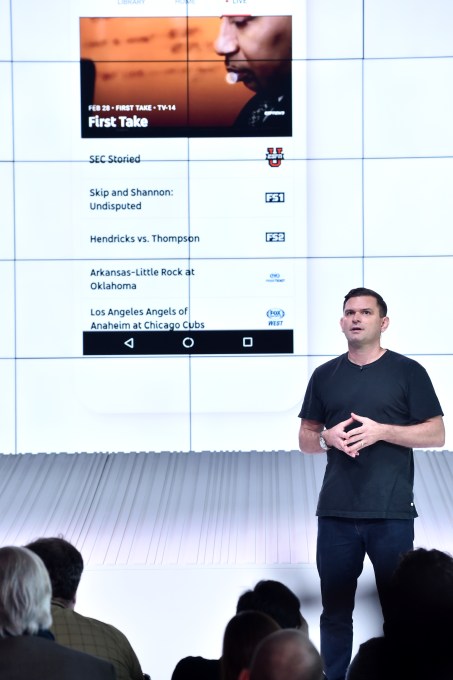 How far can the over-the-top market expand?

Beyond the top on-demand players, Netflix, Amazon, Hulu and HBO NOW, there’s a host of live TV services, including Dish’s Sling TV, Sony’s PlayStation Vue, AT&T’s DirecTV Now and, soon, Hulu, which is launching a live TV service of its own.

Of course, unlike its rivals, YouTube already has traction: This week, the company announced people watch 1 billion hours of YouTube per day. 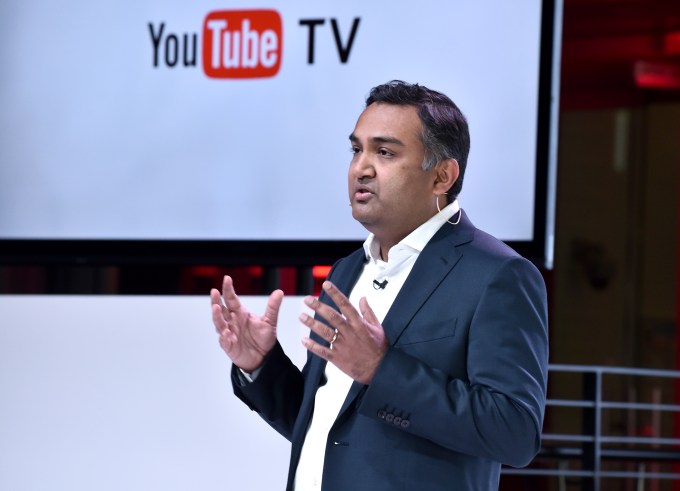 But in terms of internet TV services, it will face a different type of competition. Early pioneer Sling TV has already grown to a million subscribers, according to analyst estimates released this fall, and, despite some early glitches, its numbers continue to climb. Like YouTube TV, it also offers a base package that can be combined with add-on bundles personalized to your interests. The company just slashed the prices of those add-ons, too, likely in an attempt to defer customers from leaving for YouTube.

Meanwhile, AT&T’s DirecTV Now was so buggy at launch that customers began filing complaints with the FCC in order to get refunds. Yet, the company still managed to acquire 200,000 subscribers in its first month, without impacting its rivals’ growth, according to Sling TV CEO Roger Lynch. Instead, he said the newer arrival expanded the market for over-the-top services with its entry.

With YouTube today bringing even more attention to the streaming TV market, the question now is whether this will be the tipping point where the number of competitors outpaces the growth of the over-the-top market itself.

YouTube TV will be available to U.S. customers in select markets on web, Android and iOS in the months ahead. The company is taking sign-ups on its homepage now.