Record labels refuse to allow streaming of remixes and hour-long DJ sets unless copyright owners get paid for every little sample. Dubset just raised $4 million to handle that legal mess so Spotify and Apple Music can offer the type of music that used to live illegally on SoundCloud.

Dubset-approved remixes are starting to appear on the big streaming apps, and White believes that DJ mixsets will become available soon.

Founded in 2010, it took years for Dubset to flesh out its audio fingerprinting and rights management technology that can detect every sample used in a song or mixset based on a database of 100 million master recordings. It can then distribute royalties appropriately.

Now, sample-heavy musical styles like dance and hip-hop are dominating the charts. DJs often do unofficial remixes of other producers’ songs to add different instrumentals, or lace dozens of artists’ songs together in mixsets or recordings from their club gigs. Rappers lay their own rhymes over someone else’s beats in what they call mixtapes. While rarely sold directly for profit, the artists producing this sample-based work see it as an opportunity to promote themselves by including recognizable snippets of music. They often believe the artists they sample are getting free promotion. 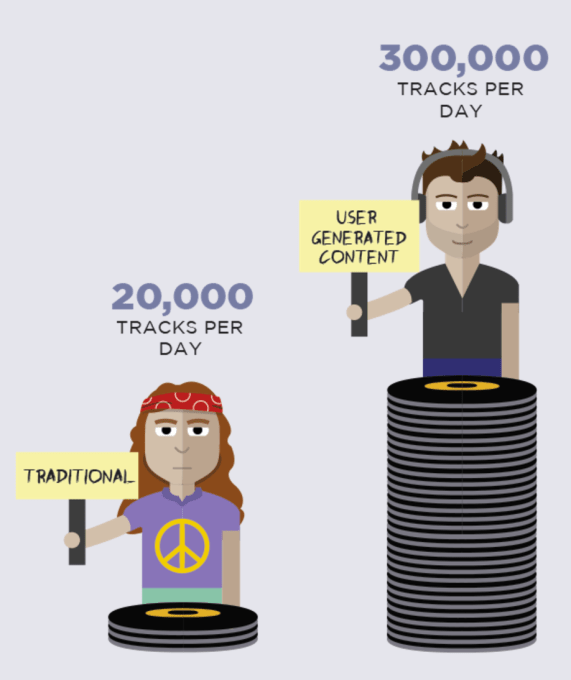 SoundCloud’s focus on user-uploaded content made it the home for this content. But some labels started to push the platform to take down this music for infringement if it utilizes samples they own, angering users and creators. Meanwhile, listeners have increasingly adopted on-demand streaming services like Spotify and Apple Music that have strong relationships with labels. Despite big artists like The Chainsmokers, Tiesto, Afrojack, Steve Aoki and David Guetta endorsing Dubset, these streaming services have largely steered clear of the legal gray area of remixes, mixsets and mixtapes.

Then, last year, Dubset struck its first deals with Spotify and Apple Music to allow songs that use samples owned by labels it works with.

One song in particular, a collaboration called “My Number” by Major Lazer and Bad Royale, “was a huge hit and opened everyone’s eyes to the potential of the platform,” White tells me. It was a challenging case because the track contained both samples and sections with a newly recorded cover version of an existing song. “They couldn’t clear it through traditional channels. We cleared it quickly through our platform and distributed to Apple, Spotify and YouTube. Millions of plays later, everyone’s happy,” White beams.

Now it’s a matter of getting more labels and publishers convinced the model is a new revenue stream, not a get-out-of-jail-free card for music pirates, and getting those interested onboarded onto Dubset and their master recordings indexed. The more labels that agree to get paid for their samples rather than take down the songs that use them, the more ears both the new mixes and originals will reach.

Spotify and Apple Music, as well as YouTube, Amazon, Pandora and other plays in streaming are searching for ways to differentiate their apps. Most have access to a similar back-catalog, but some are investing heavily in exclusive or early access to new releases like Apple’s deal for Drake’s hit album Views. Others, like Spotify, are building out original video content and music discovery features like its popular Discover Weekly playlist.

If one of these giants either bought Dubset or built their own version and struck their own label deals, they could court a new audience of dance aficionados while countering the narrative that streaming screws artists out of royalties.