Google Maps is today rolling out a new feature to all users on iOS and Android devices that will allow you to make lists of places that you can star, save and share with friends. There are three different lists types built in at launch – “Favorites,” “Starred Places,” and “Want to Go” – the latter which is designed to serve as a personal bucket list. However, you can also create your own custom lists which can be public, private, or shared with a link.

The feature has been in testing since this past fall among Google’s power users, Google Local Guides, and was built off the starring functionality that’s been available in Google Maps for over five years.

Being able to create and share lists of places could give Google Maps a more social feel to it. That’s an area that Google wants to explore, notes Maps lead product manager, Zach Maier.

Before, he says, Maps has been focused on getting people from point A to point B without getting lost. Now, “we want to help people break out of their routine, and do something new,” he explains. 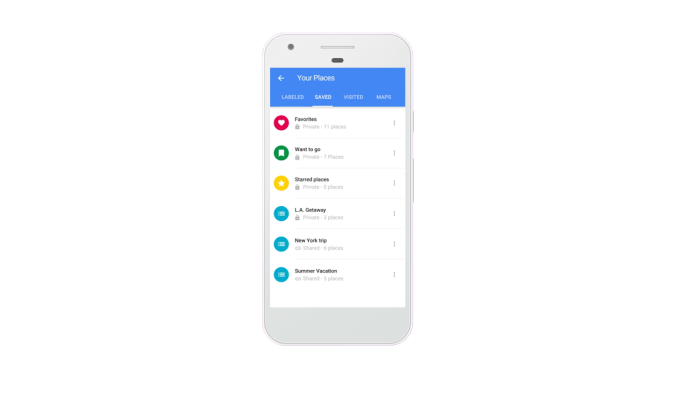 To use the lists option, you tap the “Save” button that appears on the detail page for the location in question, whether that’s a business – like a restaurant, bar, or shop – or anything else. It can even be a drop pin you place on the map itself, Maier said. That’s helpful for marking specific destinations that aren’t otherwise discoverable in Google Maps, like a particular spot within a large, local park.

It seems like Starred places and Favorites could have some overlap, but the intention with Stars is to allow users to save a personal list of places they need to reference, that aren’t necessarily those they would call “Favorites.” For example, a doctor’s office or school might be Starred, but not favorited.

During testing, users could create lists for themselves, but with today’s launch these can be shared and followed, too.

So if you make a list of the best restaurants in your city, you can make it discoverable by any user on Google Maps by setting the list to public. Or, if you’re making a list to be shared with just one person or a group of friends – like a travel itinerary or local recommendations catering to someone’s particular interests – that list can be shared via a link instead. 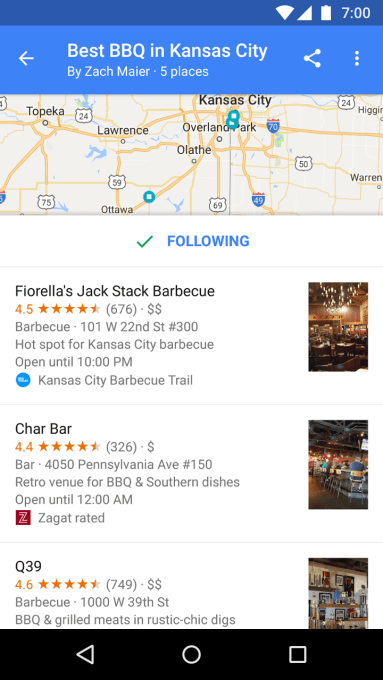 Google hasn’t partnered with any brands or publishers on the launch to seed the service with interesting and useful public lists, but Maier didn’t rule out the possibility in the future. Today, Google already works with several companies, like NYT, USA Today, Michelin, and Google-owned Zagat, for instance, to augment its search results with more information, including links to those brands’ own lists. It would make sense to bring them to Google Maps at some point, too.

The new feature will compete head-on with Foursquare, which has offered list-making tools for some time, as well as with smaller startups like Soon, Spot, and the zillions of other “bucket list” making tools on the App Store.

Google’s public lists won’t yet be searchable, in the same way that Foursquare’s are, but your own lists will pop up as suggestions when you begin to type in the search box. Your lists and those you follow are also available offline.

Google says the new feature is rolling out today on iOS and Android, and lists will be viewable on the web through shared links. The full list-making experience will come to the web and other platforms at a later point.