Pitching a bird’s eye view of customer feedback based on social media comments and push surveys from the company, BirdEye (get it?) has raised $25 million in new financing.

Beyond simple customer feedback, BirdEye chief executive Naveen Gupta says that the company’s software can automate the ticketing process to not only raise issues to the managerial level, but also ensure that steps are taken to address customer complaints.

So every time someone goes on Yelp and bitches about the roach they found in their taco loco burrito, this is the software that makes sure someone’s head rolls as a result.

It’s the NSA for customer feedback and the goal is to get customers to thank them for listening by tweeting and posting about the service they received as a result of their complaints.

“They are trying to find experience anomalies and focus them on marketing,” says Ajay Chopra, a managing partner at Trinity Ventures, which previously invested in the company.

“Advertising is becoming more and more expensive and less and less effective. By making customers happy and providing customer service… people will love to talk about their experiences,” he said. 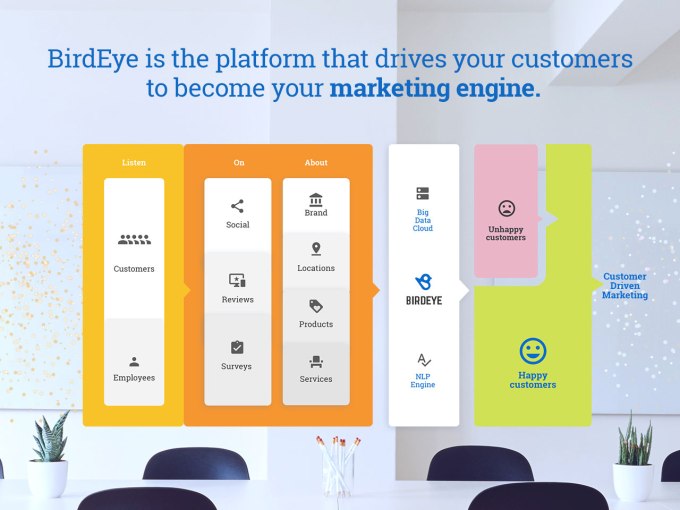 Chopra acknowledged that there are several companies competing for the analytics crown, but not all of them possessed the same level of functionality, the investor said.

“There are [two] types of companies in this category. One is people like Sprinklr who are getting social media data…. You can figure out what people are talking about… [but that’s] less to do with operations for the business and more to do with sentiment,” says Chopra.

The other type of company is the customer retention services like Medallia, Chopra says. “We feel like there’s a direct correlation in the experience that a business deliver to a customer and a certain subset of customers that will share their thoughts on that experience,” he says.

BirdEye wants to drive that experience.  According to the investor and his chief executive, the service seems to be working. Chopra said that the company is on the road to a public offering in 2019, while Gupta said the company was already profitable and had 110 employees working from offices in Sunnyvale, Denver, Dallas, and Delhi.