Twitter may have re-oriented itself and laid off part of its workforce to streamline its business, but it still doesn’t look like it is bringing in enough money to keep Wall Street happy.

Here is the biggest data point from the company’s fourth-quarter earnings report: according to the company, advertising revenue totaled $638 million, which was down slightly year-over-year. A reversal in its advertising growth is certainly not going to help Twitter’s case, which needs to be able to pitch itself to advertisers as a legitimate alternative to Facebook — and now Snap, which is expected to go public in March and already generated $400 million in 2016.

Twitter needed to show that it could have a strong fourth quarter given that the 2016 U.S. presidential election — probably one of the most Twitter zeitgeist-y moments of all time — happened. Beyond that, President Donald Trump is also an active Twitter user, giving it additional strength as a go-to platform for news. Despite that, revenue for its users in the U.S. was also down. Twitter was essentially gifted one of the largest news cycles and engagement moments it’s probably ever seen in its lifetime, and it still looks like its core issues on monetization are growing.

Not surprisingly, Twitter CEO Jack Dorsey specifically said on the earnings call that 2017 was the year that Twitter would be working on simplifying and building better ad products.

“2017 will be about simplifying and differentiating our revenue products,” he said. “It’ll take time for all the results we want to see.”

Twitter reported earnings of 16 cents per share on revenue of $717.2 million, whereas Wall Street was looking for earnings of 12 cents per share on $740.1 million in revenue in its fourth-quarter earnings report. So while Twitter was able to essentially operate more efficiently. it still isn’t doing the job it needs to be doing in monetizing its user base. That revenue growth is even only up marginally from the same quarter a year ago, and Twitter’s revenue growth appears to be rapidly becoming a very big sticking point for the company beyond its usual problems with slow user growth.

“As we’ve previously stated, revenue growth will continue to lag audience growth in 2017 and could now be further impacted by escalating competition for digital ad spending and the re-evaluation of our revenue product feature portfolio, which could result in the de-emphasis of certain product features,” Dorsey said as part of the earnings announcement.

Twitter’s stock continues to fall and its core business is starting to stumble, which means it’s going to be increasingly attractive to activist investors looking to agitate change in its business. While Twitter is still a platform with hundreds of millions of users, Wall Street may find itself too impatient to wait for Dorsey and his team — which are regularly churning through executives — to figure out where to take the company and start with some fresh eyes. That Dorsey splits his time between two companies (Square and Twitter) is probably not helping the situation either.

Twitter added 2 million new users, and is now up to 319 million monthly active users — which is a trickle, but that’s kind of to be expected for Twitter right now as it has yet to make any drastic product changes. Not surprisingly, the stock is once again getting punished, and was down as much as 11% in pre-market trading. 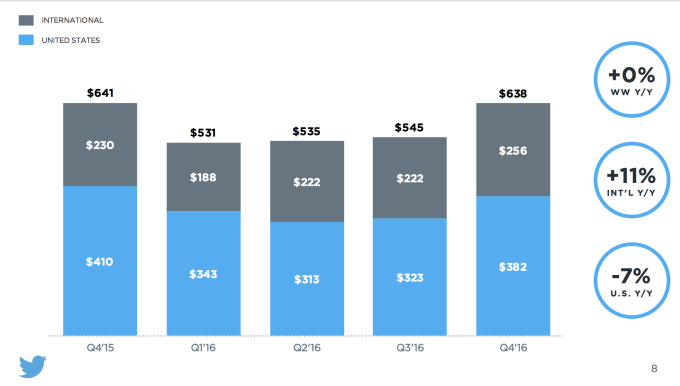 Amid all this, Twitter has been looking for newer ways to figure out how to monetize its user base if it isn’t going to be able to rapidly grow it for now. One way it’s tried to boost engagement among its users is pushing further into live-streaming, like for NFL games and the presidential debates. Twitter says video is its largest revenue-generating ad format, as well. Across the 400 events that Twitter broadcast, the company said it attracted 31 million unique viewers — 52% for sports, 38% for news and politics, and 10% for entertainment.

In October last year, Twitter said it would lay off 9% of its workforce as it began to rejigger itself following the collapse of potential acquisition talks with suitors like Disney and Salesforce. Part of the problem that even posed issues for the company in those talks was that it was the home of a lot of harassment and abuse, which at the time still had not been addressed at a product level.

Twitter, to that extent, has started making some moves toward silencing abuse in order to curb the harassment problem that’s plagued the platform throughout its existence. Twitter, which has traditionally moved slow and incrementally — as so not to scare off its highly devoted users with too drastic changes — is at least trying to point itself and its product roadmap in the right direction.

Twitter will be trying to scrape together as much good news as it can going forward. One contextless data point it’s offered is its DAU growth, in which daily active users rose 11% year-over-year and are growing at an accelerating rate. But without an actual base number for DAUs, we really have no idea of how much that actually amounts to.

There are now many looming shadows over Twitter. What happens to its user base as everything shifts toward video, and does that help them? What do potential changes from the new administration, such as the selection of a new FCC chair, mean? Can it figure out a way to monetize its user base beyond its slowing ad business as its pipeline of new users remains a trickle?

All of these are questions Dorsey needs to answer, and so far it seems like Wall Street hasn’t like what they’ve heard so far. For some perspective, just looking at Twitter’s stock price in the past year — with the huge spike below being acquisition talks — that says quite a bit about the state of the product in Wall Street’s eyes under Dorsey for his year-ish tenure.