Google today is rolling out a change to its AMP integration in Google Search that will let you view, copy and share the publisher’s own link to the webpage in question, instead of the AMP URL. The decision to make this change follows some backlash from publishers who believed Google was stealing their traffic by changing their own URLs to those that had “Google” in the name, all in the name of mobile optimization.

Google AMP (Accelerated Mobile Pages), as you may recall, is Google’s project to speed up web browsing on mobile devices by offering optimized versions of publishers’ sites that aren’t bogged down by third-party scripts and other extension mechanisms that can slow or stop the page from rendering.

However, there has been some misunderstanding about how AMP works. One widely circulated blog post written back in October claimed Google was stealing traffic from publishers via its AMP pages. But that wasn’t true. Google does display the AMP URL in the search results, which serves up the page content from Google’s cache, but the traffic remains the publisher’s, and the content is served from the publisher’s site.

Still, there has been concern over this URL system.

The AMP URLs would redirect visitors to the publisher’s site as temporary redirects, not permanent ones, Search Engine Land explained last fall. Without support for direct links, some were worried that bookmarked URLs might stop working in the future, if Google made any changes. Plus, there was just general confusion from users over how to share the links. People would see the AMP URL in the address field, and they would not want to copy and paste it because it wasn’t the “real” link to the webpage.

As Google says today in a blog post announcing the change:

Google AMP messed with that system.

Instead of one URL (the publisher’s), there were three. This includes the publisher’s URL, the AMP Cache URL – the document that’s served up through AMP’s cache, but generally invisible to users – and the Google AMP Viewer URL, which is the AMP URL you see in the search results. 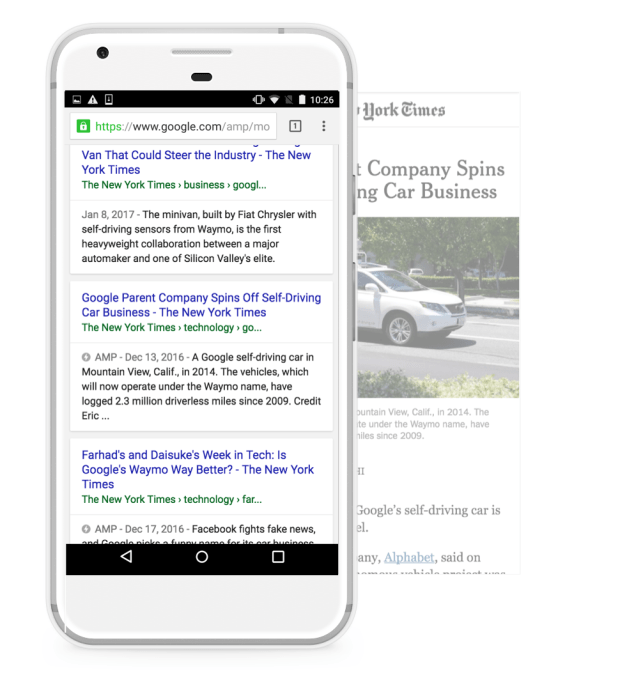 Google goes on to detail why those design choices were made, citing ease-of-use for publishers as one example. The company also explains how it’s able to pre-render AMP documents in hidden iframes on the search results page in order to speed up the time it takes to load the link the user eventually clicks on. But this also means that the URLs users see have to be on the google.com origin.

To make users understand where the webpage content is actually coming from – that is, not Google – it pops up a header bar on the top of the page that will display the true origin of the page (e.g. “nytimes.com”). 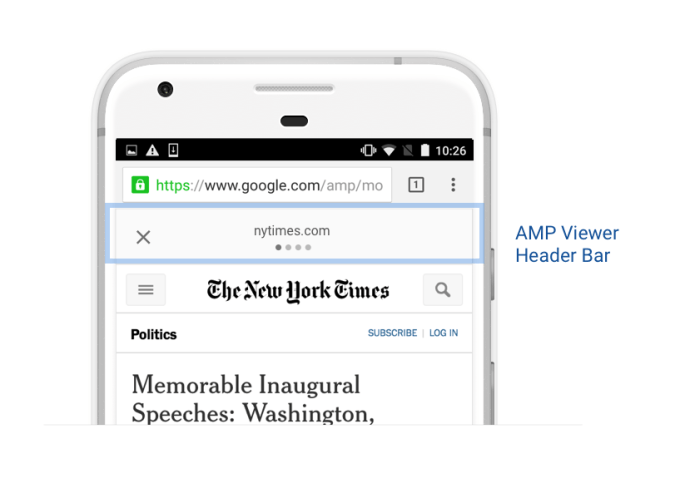 But when a user wants to copy or share a webpage, they generally look to the address bar. Since this is showing a google.com address, it’s not the link people want to bookmark or share with others.

Now Google is adding a button to the header bar that will provide this info. This will display the publisher’s own permalink for the page in question. The feature allows users to use their browser’s native share functionality by long-tapping on this link, says Google.

The feature is already available in the iOS Google app and will roll out to the Android version in the coming weeks.

It also has under development a Web Share API that would allow AMP viewers to pull the original URL into the native sharing flow on the platform, instead of the AMP Viewer URL.

Working on a direct path from AMP pages loaded from Google Search to the canonical & sharing will use the canonical if technically possible.

Google had already indicated it was working on just such a solution, given both publisher backlash and user confusion. Now that it has come to pass, more publishers may choose to participate in AMP since their own links will no longer be entirely hidden.