Snapchat may be facing slowing user growth, and relatively no revenues, outside of the U.S. at the moment, but it is also tapping the international opportunity in other ways.

Snapchat Shows are part of the company’s original-content push that has also brought in material riffing off popular TV shows from NBC Universal, video material from Buzzfeed, as well as shows from ABC and Turner.

Planet Earth II — the sequel to the highly acclaimed series from 2006 directed and narrated by David Attenborough — was broadcast last year in the UK and became the most-watched nature show in the history of British TV. And that is saying something, since the UK really loves its nature documentaries.

It looks like the BBC is aiming to create a similar blockbuster across the pond: the Planet Earth II “Show” (on Snapchat) will begin broadcasting February 17, one day ahead of Planet Earth II (the series) debuting on BBC America.

As with previous Shows on Snapchat, the Planet Earth II material will be exclusive to Snapchat. It will be based on a “vertical mobile viewing experience” and will include not just new storylines outside of the actual program, but new footage related to the series itself.

It’s also a practical use of BBC assets. The BBC says that it spent over three years making the series, including 2,089 filming days (several times, with different crews were in multiple locations on the same day), and 117 production trips and 40 different countries — and you can imagine a huge amount of great footage never made the final cut. But while Attenborough narrates the actual BBC series, he won’t be on the Snapchat Show, where Sophie Okonedo will be doing the talking. 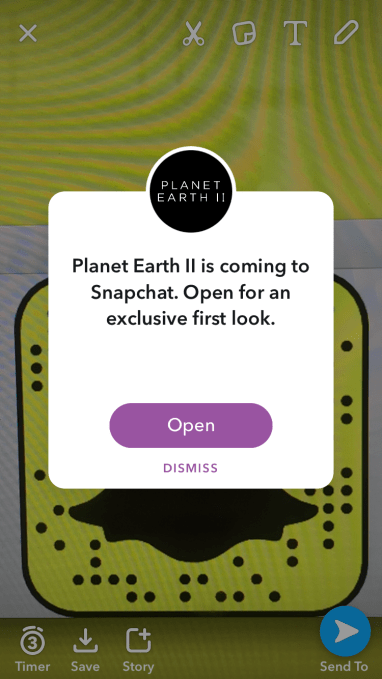 In addition to the Show, Snapchat is using the launch to update features on its Snapcodes, the short cuts that people can scan using their phone cameras and the Snapchat app to jump to specific content, add filters, or add friends or brands to the list of who they follow on the app.

Snapcodes will now link to preview videos and the ability to subscribe to the full Show series. And once the Show begins, if you come across a Snapcode it will link you to the previous episode before the current one — essentially prolonging the shelf life of content on Snapchat’s otherwise-ephemeral platform. (This means that while people may scramble to see content before it disappears, this will give them, essentially, a second chance.)

A lot may see the addition of a Planet Earth II Show as a sign of how the BBC wants to attract a bigger audience from Snapchat’s demographic of younger users — not just to expand its wider viewership but to tap into the bracket of consumers that advertisers love to court. And that may certainly be the case.

“For millions of Snapchatters, our app is their first screen — and this will be their first introduction to the unbelievable cinematic quality, storylines and stunning visuals of the Planet Earth franchise,” said Nick Bell, the VP of Content for Snap. “We saw a unique opportunity to work with BBC Worldwide to reimagine Planet Earth II for our platform. We can’t wait for our community to get to experience it.” Bell hails from the UK himself, cutting his teeth at a number of media companies including News Corp.

But in my opinion it could work the other way, too. Snap has largely built its business on targeting and catering to a demographic of users aged between 18 and 34 years old (Snapchat describes this as the “majority” of its users in its S-1).

But to grow and help sustain its business longer term, Snapchat might try to pick up and engage other kinds of (OLDER) audiences. That’s something Snap’s been trying to do for at least a year, with varying degrees of success. Broadcasting original content for a nature documentary is a way of adding content that might appeal to a wider audience beyond its core market of millennials and Generation Y consumers.

“This initiative with Snapchat is the perfect partnership: a celebration of our amazing planet through an exclusive offering to Snapchat users, including many BBCA fans, who are some of the most plugged in and digitally aware people on earth,” said Sarah Barnett, the President of BBC AMERICA, in a statement.

Aside from this, it’s a sign of how Snap has figured out a way to make itself relevant to a wider audience with original content at a time when others like Twitter and Facebook have also been trying to capture more video viewers. Snap says that there will be more content partners for its Shows and Editions (another original content push for publications) coming to the platform soon.

In addition to the new video footage, the Planet Earth II Show will also feature some other firsts. Sound for the video was picked up with two microphones to create binaural recordings, the basis of stereo sound.

This will mean you get a more 3-D style listening experience for the Show if you happen to be watching it using earphones — but it also starts to lay some groundwork for how Snap might eventually take more of these Shows on to other, more immersive screens — namely things like VR and AR headsets.

“Through this partnership we’re collaborating with Snap to take a truly digital-first approach to landmark natural history —  exclusively for this innovative mobile platform,” said Tim Davie, the CEO of BBC Worldwide, in a statement. “It’s a new way for audiences to discover and delight in world-class storytelling that has been developed by filmmakers who continue to push the boundaries of their craft and present us with such jaw-dropping and universally-adored content.”