Facebook had another strong quarter in Q4 2016, earning $8.81 billion in revenue and $1.41 EPS. It pulled that from 1.86 billion monthly users, up 3.91 percent this quarter, or 70 million users, from 1.79 billion, but at a slower pace than its 4.67 percent growth last quarter. Mobile now makes up 84 percent of its ad revenue, the same as last quarter, accounting for $7.248 billion, signalling that Facebook has successfully completed its shift to mobile. 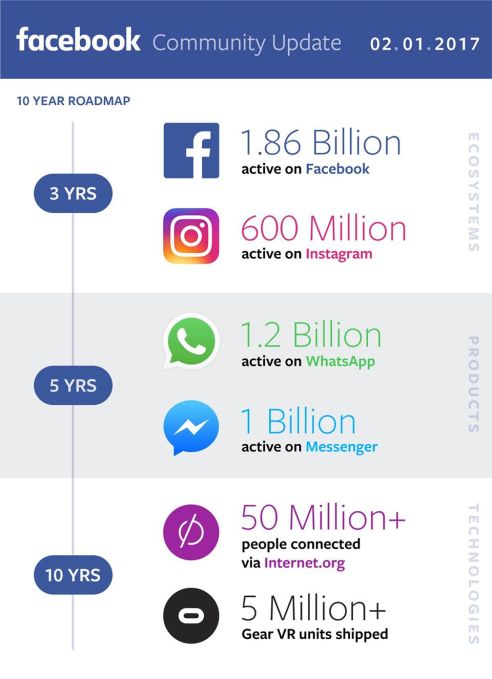 Last quarter Facebook warned that revenue growth would slow because it predicts it will run out of ad space in mid-2017, though it seems that’s already having an impact. But despite this slowing of revenue growth, investors pushed the share price up 2.52 percent in after-hours trading to $136.69 following the earnings announcement, after it closed up 2.23 percent at $133.23 earlier today. By the end of the earnings call, the after-hours share price has slipped to just 0.94 percent up.

One of the most important and widely overlooked stats is Facebook’s stickiness, or what percentage of monthly users come back every day. That stayed constant at 66 percent, the same as last quarter. However, user growth in the U.S. and Canada is beginning to slow, where Facebook added just 2 million daily and monthly users this quarter to hit 180 million dailies and 231 million monthlies. 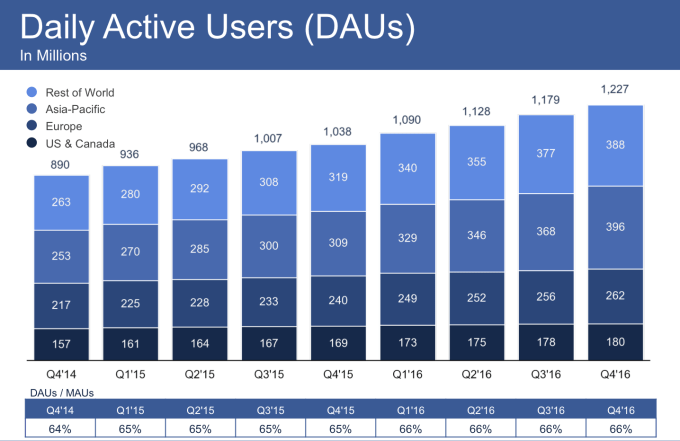 All of Facebook’s engagement and ad targeting is paying off. It reached a massive $19.81 average revenue per user in the U.S. and Canada, up 44 percent YoY. Globally, it hit $4.83 ARPU, up 29.5 percent YoY. That means it’s earning nearly $20 per user per year. The ability to squeeze more and more cash out of each user in its established Western markets, while steadily earning more in developing countries where it’s still growing, shows Facebook has strong earning potential for the forseeable future.

During the earnings call, CEO Mark Zuckerberg was repeatedly asked about Facebook’s video content strategy. He explained that “we’re focusing on shorter form content to start”, and that the company needs to build a sustainable ad revenue sharing business model to pay professional creators to bring that content to Facebook. Zuckerberg also noted video’s progress outside of content, citing that 400 million people use Facebook Messenger audio and video calling each month. 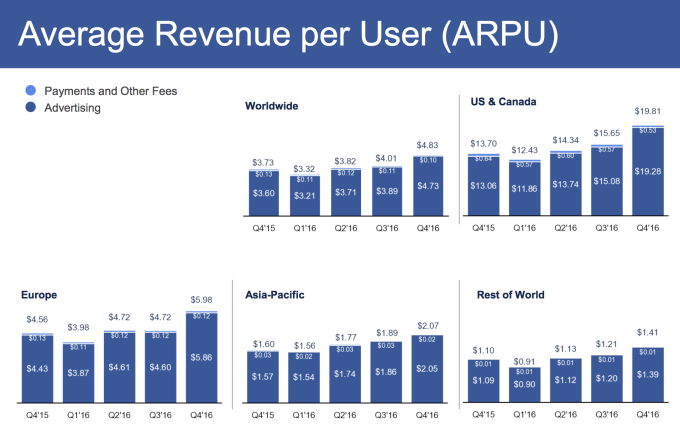 Facebook had a tumultuous quarter in the news after it was hit with allegations that fake news that spread through its network helped Donald Trump get elected. Meanwhile, it was just hit today with a $500 million penalty for damages related to Oculus co-founder Palmer Luckey breaking an NDA with VR company ZeniMax.

But in the meantime, Instagram has shined, and continues expanding its ad offerings. Its Snapchat Stories clone Instagram Stories hit 150 million daily users just 5 months after launch, and TechCrunch reported that an extensive set of sources believe Instagram Stories is stealing users from Snapchat.

Now 13 years old, Facebook has shown remarkable stamina, keeping users happily sharing and Liking despite the shift to mobile and the advent of newer, more visual-focused social media platforms. As it expands deeper into chat with Messenger and WhatsApp, and virtual reality with Oculus, Facebook has a strong core business to rely on. And if it can use Instagram Stories and similar copycats in its other apps to ward off the threat of Snapchat, it could continue to dominate social media into the next decade.