Trying and failing to be clever on social media? Want your friends to think you’re naturally funny? A new app called CapGenius aims to help. This fun little addition to your iPhone keyboard offers a search engine for quips, puns, quotes, lyrics and other phrases that you can quickly pop into your Instagram posts, status updates, snaps, tweets, texts, and more.

The app was created by longtime friends Jordan Verroi and Josh Miller who wanted a tool to help them come up with a good caption for their posts, and figured others probably shared this struggle. The app, which is installed as an iOS keyboard, is aimed at consumers, not brands. Specifically, it’s targeting the 18 to 35 year-old demographic who spend a lot of time on social media.

While perhaps something of a niche product in the broader app market, teens and young adults today work hard to craft their social media presence. Being thought of as funny could be considered an aspect of that, along with all their perfectly filtered photos. But CapGenius could also be used when trying to befriend someone new, such as in a dating app, suggests Miller.

As for the content, some is funny and some is groan-inducing, I’ll admit. There are jokes and puns about everything from hangovers to Trump to friendships and love, as well as content associated with various TV shows, plus song lyrics, quotes, and pick-up lines. 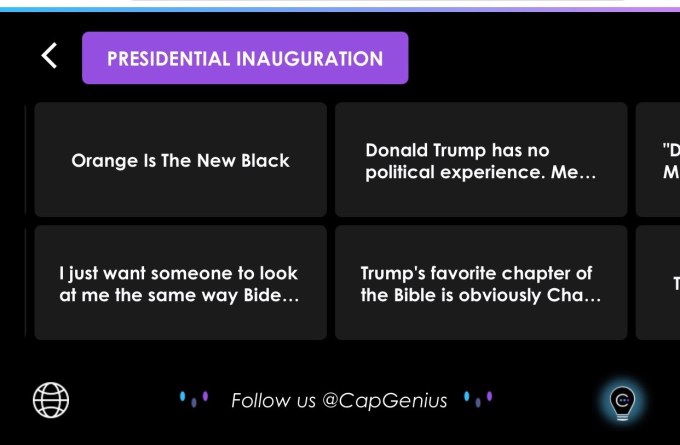 To help with the content, the creators recruited social media stars Jordana Abraham, Samantha Fishbein, and Aleen Kuperman, who run the viral lifestyle website and the Instagram account @Betches. Their audience includes 9 million people, which could help CapGenius grow. The plan now is to bring in other content from comedians, artists, and brands, the latter of which could lead to a means of making money, assuming the app developed a following.

The team is also working on partnerships that will allow it to include a larger selection of favorite movie quotes and music lyrics in the app. 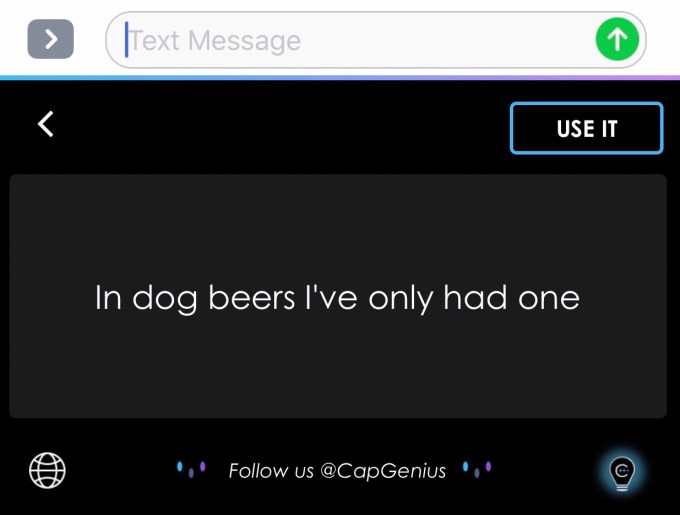 And, because you don’t want to use the same joke everyone else is, the database of content is added to regularly. It has some over 7,000 unique pieces of content now, and four staff writers update the database daily. That’s how the app soon had new jokes and quips about things like the presidential inauguration, for example, or “The Bachelor” TV show.

The app launched in December, and the team isn’t sharing its user numbers yet. But Miller says daily retention is already high – over 30 percent. But the app is still low-ranked on the App Store, only occasionally even making the charts in the Entertainment or Social Networking sections.

Another concern for an app like CapGenius is that it’s a third-party keyboard only. That category hasn’t been as broadly adopted on iOS as once hoped. Even apps that make sense as keyboards, like Giphy, also establish themselves as standalone apps to reach a wider user base. This could limit CapGenius’ growth, which is critical for an app that may or may not be able to attract mainstream interest.