This past summer, Facebook introduced a new photo-sharing sharing tool called Slideshow that’s able to turn your photos and videos into mini-movies that also include themed music and transitions. The feature had originated in Facebook’s private photo-sharing app Moments before making its way over to the main social network.

The idea is to offer Facebook users an easier way to create more compelling, engaging posts as an alternative to simply posting a video or a bunch of static photos.

The Slideshow movie-maker had also arrived at a time when many tech companies, Apple and Google included, are trying to figure out new ways to help users do more with their now numerous photos and videos, while also helping to automate sharing. Apple last year announced its mini-movie maker called Memories in iOS 10, for example, and Google Photos has long since included several automated photo tools, including its own movie maker.

At launch, Facebook’s version would prompt users who were posting their status to create a Slideshow if they had snapped more than five photos or videos in the last 24 hours. A “Try It” button also appeared next to friends’ slideshows you were viewing.

Now, however, you’ll see the option appear when you click on the Status bar (“What’s on your mind?”) alongside the others, like Photo/Video, Go Live, Check In, Feeling/Activity, etc.

This is where it will be found on Android as well. 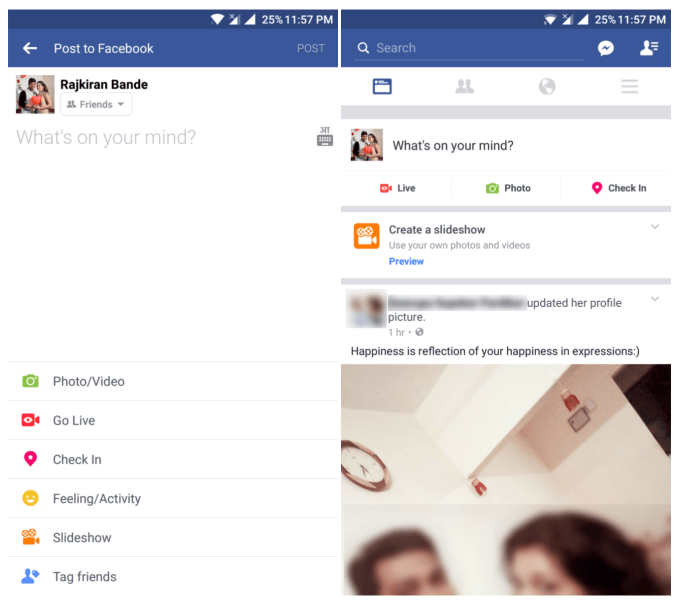 Slideshow’s Android launch was first spotted by the blog Android Police, which noted that the option is appearing in this same section, just above the “Tag Friends” option. Not everyone is yet seeing this feature, though.

Facebook confirmed to us that it has just started to test the feature on Android, and only a small percentage of users are seeing it appear for the time being.

It’s interesting that it’s still being characterized as a “test,” given that the feature has been live on iOS for over half a year. But since it’s not a full rollout yet, it’s possible that Facebook will make some tweaks ahead of its public launch.

The movie maker basically works the same on Android as on iOS for now. You’re prompted to select from a gallery of your own photos and videos, and then set your title and pick your music before publishing to Facebook. (Facebook provides the music choices as before – you can’t choose your own.)

Facebook didn’t say when Slideshows would roll out to all Android users, but given the feature’s maturity, that date is not likely to be too far away.