While global investment in cybersecurity startups may have shown signs of slowing in 2016, Israel – second only to the U.S. market – remained strong and showed impressive numbers yet again, as we witnessed a surge in funding and continued innovation.

CB Insights estimated that the 2016 global deal activity and dollar funding in cybersecurity had slowed from the peak times of 2015 amid investor worries that the space has been overfunded, but we are pleased to report a different set of results coming out of Israel, especially in startup funding.

We took note of 83 newly founded cybersecurity startups in 2016, just slightly higher than 2015 when 81 startups were founded—meaning, there certainly wasn’t a slowdown in entrepreneurship and innovation.

Many of these new companies were formed by young teams – founders with only a few years of relevant experience at established companies and/or key startup positions – whereas in prior years, primarily experienced teams led the march to start new cybersecurity companies.

Sowing the Seeds of Success

From the startups founded in 2016, an astonishing 36% have already raised seed money. By comparison, this number was just 15% a year ago.

The average seed round of investment for these startups rose to $2.85 million compared to $2.5 million the previous year.

The benefit of experience is notable; from the newly founded startups that received seed money, 67% are headed by experienced teams.

Seed money also went to teams that founded their companies in years prior to 2016. Of all companies that received seed funding, regardless of their year of founding, the average funding was $2.7 million, an increase from $2.3 million in 2015.

Overall in 2016, there were 72 investment rounds in the cybersecurity space in Israel, compared to 62 in 2015.

There was a 23% increase in overall funding for cybersecurity companies across all stages—from $560 million in 2015 to $689 million in 2016. This overall increase in funding shows that companies continue to stay above the curve and raise substantial amounts of capital for growth.

An interesting transition pertaining to the stages of investment has taken place from 2015 to 2016. We see that early stage investment, both in seed and A round, is substantially rising—a 24% and a 91% increase, respectively. B rounds showed a steep decline of 52% year over year.

We contribute the B round decline to the fact that companies are raising substantial amounts of capital in the A round and are making good use of the funds, thus delaying follow-on financing. Examples of companies raising big A rounds this year are Claroty, FireGlass, Safebreach and Twistlock.

In the growth stage, there is a big increase of 212% in funding in 2016 over 2015, which indicates companies are succeeding in raising capital to build big companies in the future. Both ForeScout and Skybox Security have raised dozens of millions this year, potentially on their way to IPO.

The Hottest Sectors for Investors

In terms of the types of cybersecurity solutions that attracted investment across all stages in 2016, investors want to back platform solutions and not just niche or single-purpose products. The most funded fields of 2016 included mobile security, vulnerability & risk management, network security, SCADA security, and incident response, which tend to be classical IT fields.

Startup companies, however, tend to focus on new fields representing new areas of risk. For example, some of the hot fields for companies that were founded in 2016 include IoT security, drone security, and cyber insurance, along with the more traditional fields of vulnerability & risk management, mobile security and others. When you see emerging technologies like those employed for the Internet of Things and drones, they are always accompanied by security vulnerabilities. This makes for good opportunities for companies in a position to address those vulnerabilities with innovative solutions. An example for such a company isApolloshield, a drone security company.

Investments in cyber insurance and vulnerability & risk management show a rise in management tools that help to control and lower the risk of a breach. Understanding (and addressing) where a company is vulnerable to threats can help to lower premiums on the cyber insurance that has become an essential tool to offset the high cost of cyber attacks. We expect this sector to attract high interest from investors during 2017. 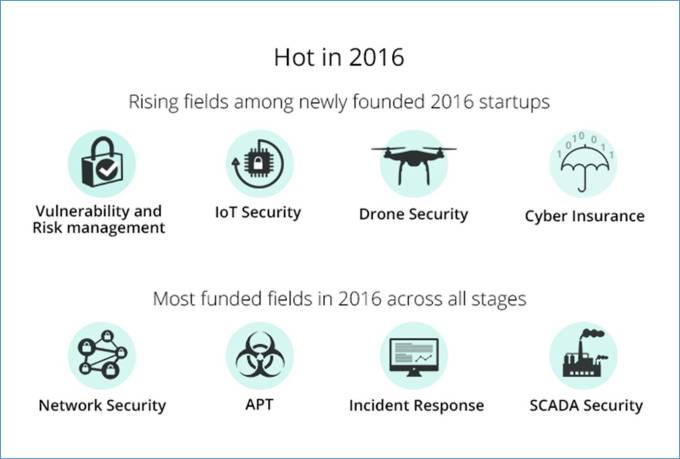 More cybersecurity companies were acquired in 2015 than in 2016, but we can see some interesting trends in the exit stage. The first one involves two companies in the important category of cloud access security broker (CASB). Cloudlock was acquired by Cisco, and FireLayers by Proofpoint. These deals join last year’s Adallomacquisition by Microsoft. With Gartner identifying CASB as one of the Top 10 Technologies for Information Security in 2016, this space is ripe for consolidation, and clearly the larger, established companies are looking for proven companies to acquire.

Another interesting trend is in the automotive security technology market. As self-driving cars and connected cars begin to fill the roadways, securing their operation is absolutely essential; there’s no margin for error. Numerous automotive security startups began rising in Israel in late 2015 and into 2016 and many of them got funded. For example, Karamba Security received funding in 2016.  Towersec is among the first companies in this sector to be acquired, and we believe this is just the leading edge of the coming wave.

There weren’t many companies exiting in 2016, but we don’t see that as a negative sign. On the contrary, many companies are raising a lot of capital, especially in their growth stages, which indicates they are interested in scaling up rather than exiting early at a lower price.

Another interesting trend concerning exited cybersecurity companies is that the overwhelming majority of them are led by experienced founders, whereas last year we saw many young teams among the exited companies. We believe that this is the result of young founders raising capital in later stages this year, building companies to scale, and not exiting early.

The Israeli Cybersecurity Industry is Maturing

Even as the global cybersecurity market experiences a slowdown in investment, the Israeli sector continues to grow. Companies are raising significant capital, even in tough times. Innovation from Israeli companies is a real bright spot as new security fields keep emerging. More and more companies are able to raise follow-on financing and continue to grow their business before exiting—a great sign of maturity of the cybersecurity entrepreneurs.

This bodes well as we head into 2017. We are optimistic about the ability of Israel’s cybersecurity entrepreneurs to continue to innovate on a global stage. Enterprise customers are driving demand for effective solutions that can help them meet stringent government regulations on data protection and privacy as well as combat sophisticated cyber threats. Our statistics show that the vibrant Israeli market will continue to foster companies that will be changing the global cybersecurity landscape for many years to come.

Many of these up-and-coming entrepreneurs and their companies will be featured at Cybertech Israel, the largest annual conference of cyber technologies outside the United States.

Disclosure: YL Ventures, is an investor in Karamba Security, Twistlock and FireLayers.