Uber settled a lawsuit filed by the Federal Trade Commission today for $20 million. The lawsuit alleged that the ride-hailing app recruited drivers by misleading them about the amount of money they could earn through the app and the auto financing deals they could get through Uber’s Vehicle Solutions Program.

The lawsuit claims that Uber made “false, misleading, or unsubstantiated claims regarding driver earnings and its Vehicle Solutions Program.” The FTC says tha 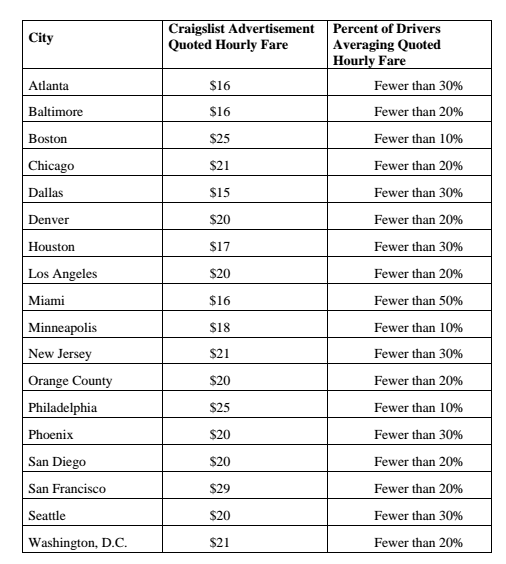 t, although Uber advertised that drivers could earn between $16 and $29 per hour depending on the city in which they drove, only a fraction of drivers actually earned the advertised amount.

Uber also promoted the Vehicle Solutions Program as a low-cost way for drivers to buy a vehicle, saying drivers would get the “best financing options available” and have “unlimited miles.” The FTC suit claims this wasn’t the case at all — in fact, Uber had “no basis” for these statements. The rates offered by Uber were often higher than those commercially available, the FTC says.

By settling the lawsuit, Uber did not admit to the allegations. An Uber spokesperson told TechCrunch, “We’re pleased to have reached an agreement with the FTC. We’ve made many improvements to the driver experience over the last year and will continue to focus on ensuring that Uber is the best option for anyone looking to earn money on their own schedule.”

The FTC will distribute the $20 million settlement back to drivers, according to the Independent Drivers Guild, an organization that represents Uber drivers in New York City.

“The reality of being a ridesharing driver is a far cry from the rosy picture these apps describe and it is encouraging to see the FTC take them to task and refund drivers. Companies like Uber shift cost, risk, and burden onto drivers and taxpayers when they fail to provide the basic benefits so many Americans take for granted, from health insurance to sick leave,” said Independent Drivers Guild founder Jim Conigliaro Jr. “Drivers deserve the fair pay they were promised, tips like other workers in the service economy, and unbiased data on the earnings and expenses of ridesharing.”