Commercial drone maker Kespry, which launched in 2013, announced it was bringing in industry vet George Mathew as CEO today.

Mathew, who most recently was president and COO at data analytics startup Alteryx, has also had stints as GM of Business Intelligence at SAP and director of Technical Account Management at Salesforce. It’s fair to say that Kespry was interested in his data background when they brought him on board.

He replaces founder and former CEO Paul Doersch. Although Mathew didn’t delve into why his predecessor was leaving, he did indicate he was recruited from his former position by Lightspeed Ventures, one of the lead investors in the company, which was looking for someone with more experience to run the company.

“We needed a CEO like [George] with great experience scaling a fast-growth data analytics company. Kespry is growing so fast the team wanted an experienced leader,” John Vrionis, a partner with Lightspeed said. 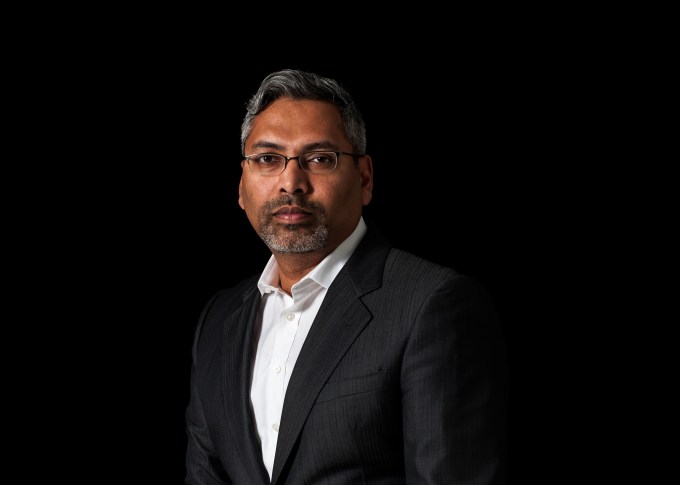 Kespry, which has raised more than $28 million, has concentrated up to this point on mostly mining applications, but they will be expanding that vision moving forward under Mathew’s leadership.

As industry analysts Drone Industry Insights told TechCrunch, “Kespry is one of the leading manufacturer and industrial Drone as a Service (DaaS) companies for the US construction and mining industry. DaaS is the present and future way of outsourcing risks, costs and administrative tasks compared to setting up your own fleet.”

At the center of the Kespry platform is version 2.0 of their industrial drone, which has a half hour of battery life and can cover 150 acres, according to the company website. Kespry has designed an end-to-end platform to define a capture area with an iPad app, launch the drone automatically without a pilot, land it automatically, share the data with an iPad and then transmit it to the Kespry cloud, which uses the AWS analytics engine to produce reports — and they do all this in less than an hour, Mathew says. 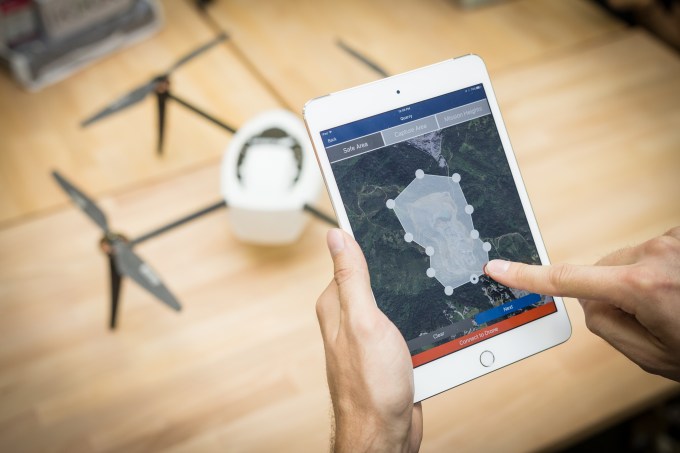 Defining the flight area on an iPad. Photo: Kespry

In their core mining example, that means you can use the iPad to draw a perimeter around your stockpile, click Go and the drone will survey the pile and give a super accurate idea of the volume you have with thousands of data points. This is opposed to sending a surveyor up the pile, risking life and limb and getting maybe 40 or 50 data points, using legacy surveying tools, according to Mathew.

“After it lands, the data is transmitted to the iPad, then sent to Kespry cloud, which takes the high resolution images [taken by the drone’s camera] and uses photogrammetry to convert them into 3D models. This immediately gives the volume, cut and fill and whatever information I want to calculate from stock pile I have,” he explained. 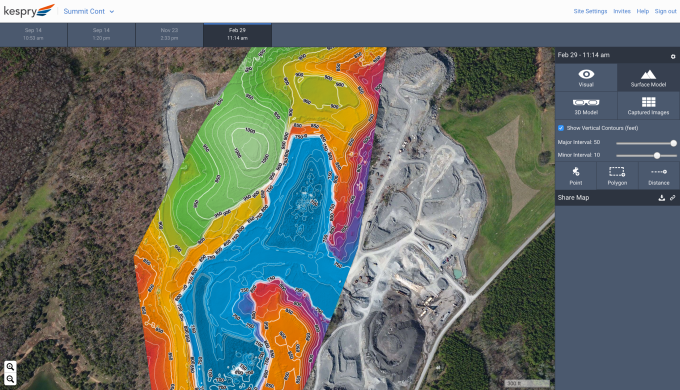 The platform is a subscription model, meaning customers pay a single price for all aspects of the platform. “Our subscription delivers a drone, software, the communications array and iPad app and full cloud service as one subscription price. We made that decision that the customer needs an end-to-end system in subscription model, ” he said. They have hundreds of subscribers, according to Mathew.

They are already looking at other use cases, particularly insurance claims, and also possibly linking with industrial internet providers like GE to combine drones and sensor data to give a full internal and external picture of the health of say a turbine farm or a solar array.

They are hardly alone though, operating in a competitive market. Competitors include DJI, particularly their models using Zenmuse Z30 cameras, Parrot’s senseFly and, on the software side, Airware, which lets companies use almost any drone platform they want for aerial inspections.

At its core, when you strip away the drone and the capture software, this is all about making the data useful and accessible, which plays right into Mathew’s background in data and analytics.

He was clearly charged up about joining the company and the challenges of defining a market that’s still in its earliest stages. “There is no limit to the possibilities of this market because it’s being defined as we speak,” he said.