Smartwatches aren’t for everyone. That much has been clear since day one, a fact seemingly confirmed by a recent stagnation in the space. Too many are designed to be once-size-fits-all, but ultimately are just too bulky and flashy with too many battery life compromises for most wrists.

As someone who tries on a lot of these devices, I’ve always been partial to the hybrid. I used to wear a Martian watch, and liked the Misfit Phase I tested out a few weeks back. Their analog faces fit better, last long and don’t demand the same level of attention as their fully smart counterparts.

I swapped the Misfit for Withings’ latest offering during CES — a chance to try the tracker during the busiest/walkiest week of the tech year. And unlike a lot of the other wearables we test around here, I won’t be ready to take it off any time soon. 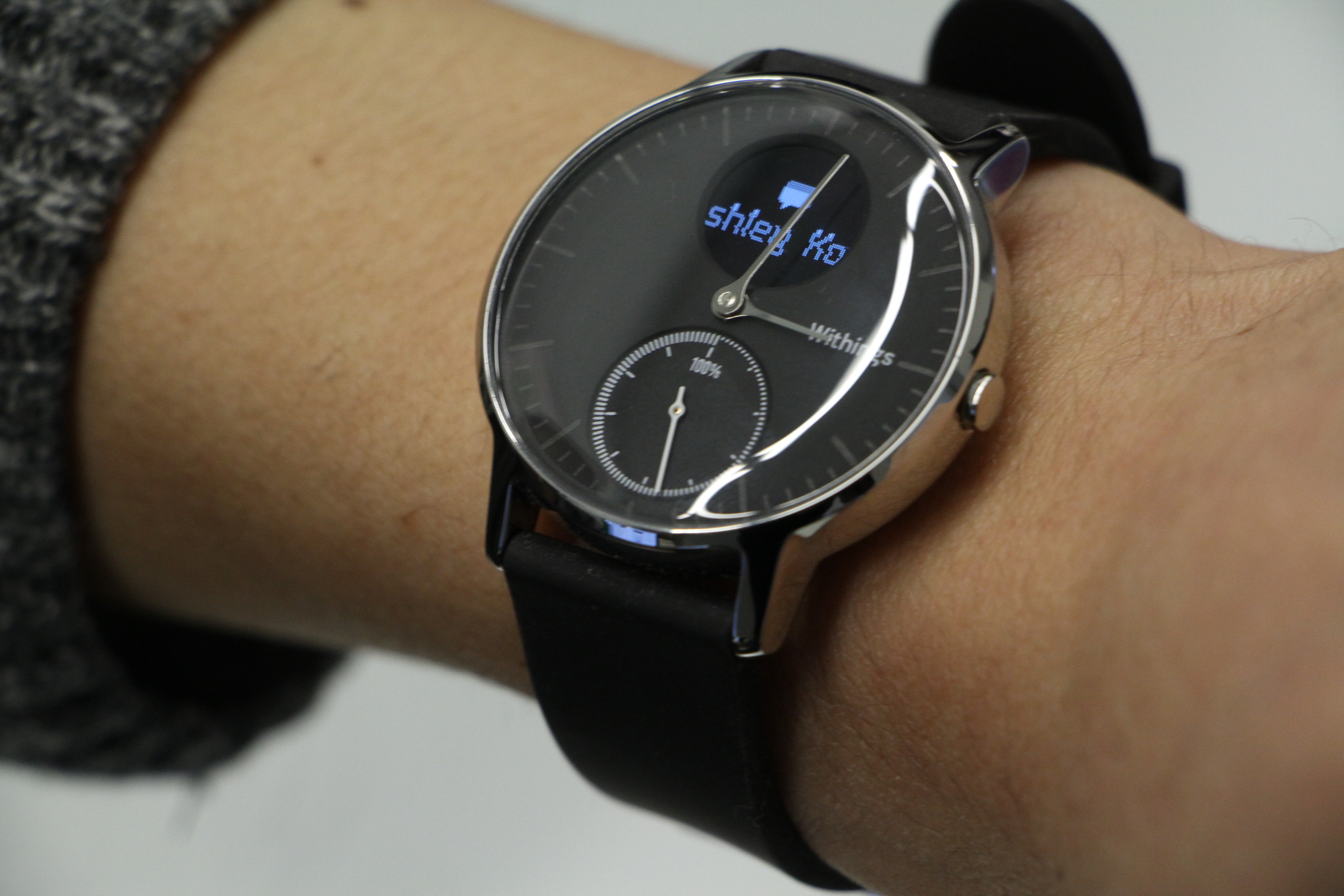 Sleep tracking has always struck me as a strange feature for a smartwatch. Not just because of the device’s limited ability to detect such things, but also because actually attempting to sleep with something that size on one’s wrist seems downright ridiculous. I tried with the Gear S3 — it’s just not happening.

The Steel HR, on the other hand, makes the Misfit Phase look downright gigantic. Sure, it’s not as compact as a standard fitness band, but at first glance, it’s virtually indistinguishable from a regular old dumb watch. It’s only when you look more closely that you notice some key differences — like the small, circular blacked out display that sits on the top of the watch face. 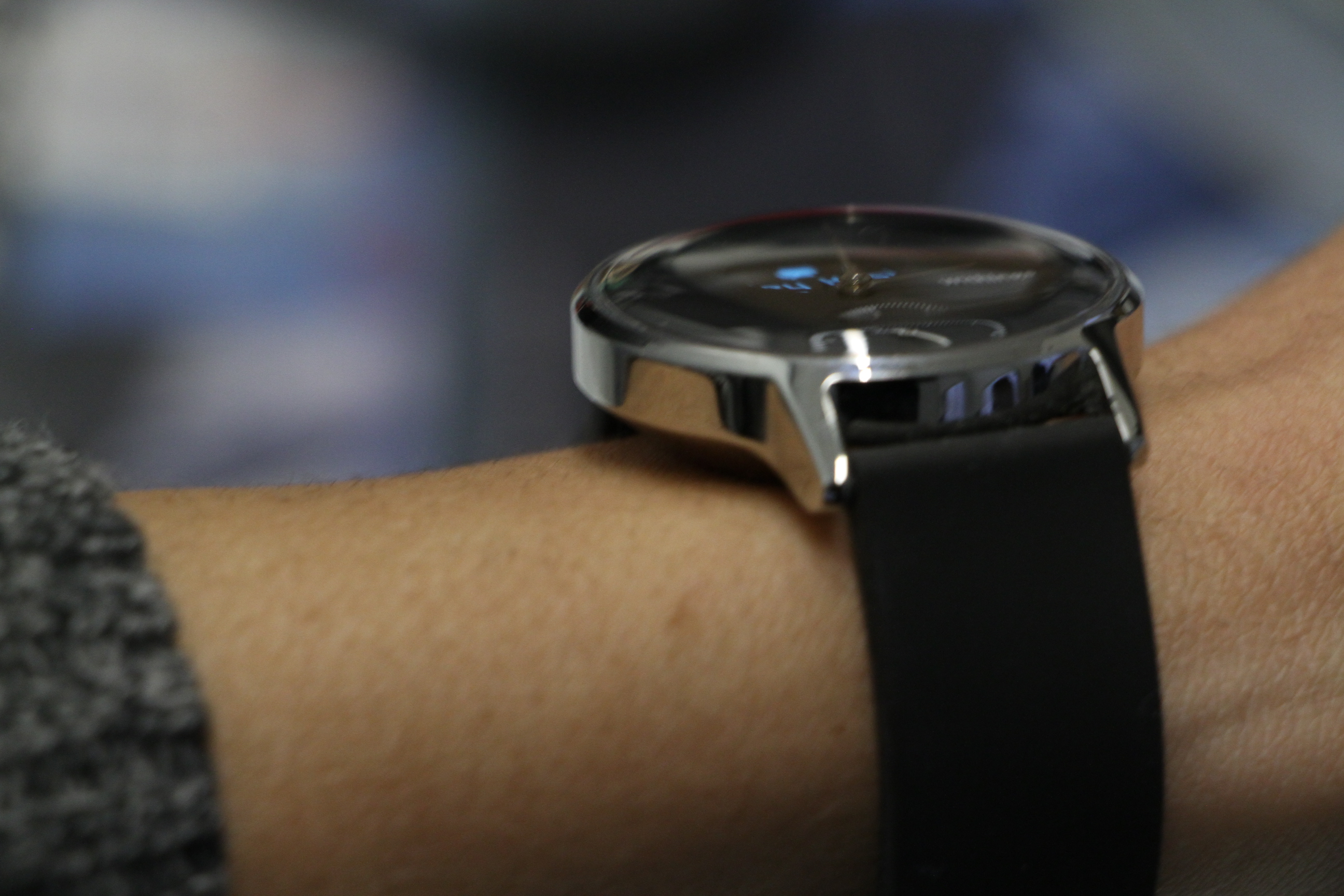 The watch is also a bit thicker than most, due likely to the extra components needed to power that secret smartness. But it’s far from bulky, slipping easily under the cuffs on my long-sleeve shirt. The case itself comes in two different sizes — 36 mm and 40 mm (1.6 in) — the former with a black or white face and the latter only in black.

In both cases, it’s a simple and understated design. A sort of undercover smartwatch. Aside from the small display window, the face is fully analog, with skinny silver hour and minute hands (no second, sorry) and a secondary dial below that displays how far the wearer is toward their daily goal.

The hands will adjust accordingly based on the device with which the Steel is synced. Right out of the box, however, you’re going to calibrate them using the connected app. The watch does contain a single button in place of the dial that’s used to toggle between screens on the display and start and stop the timer. 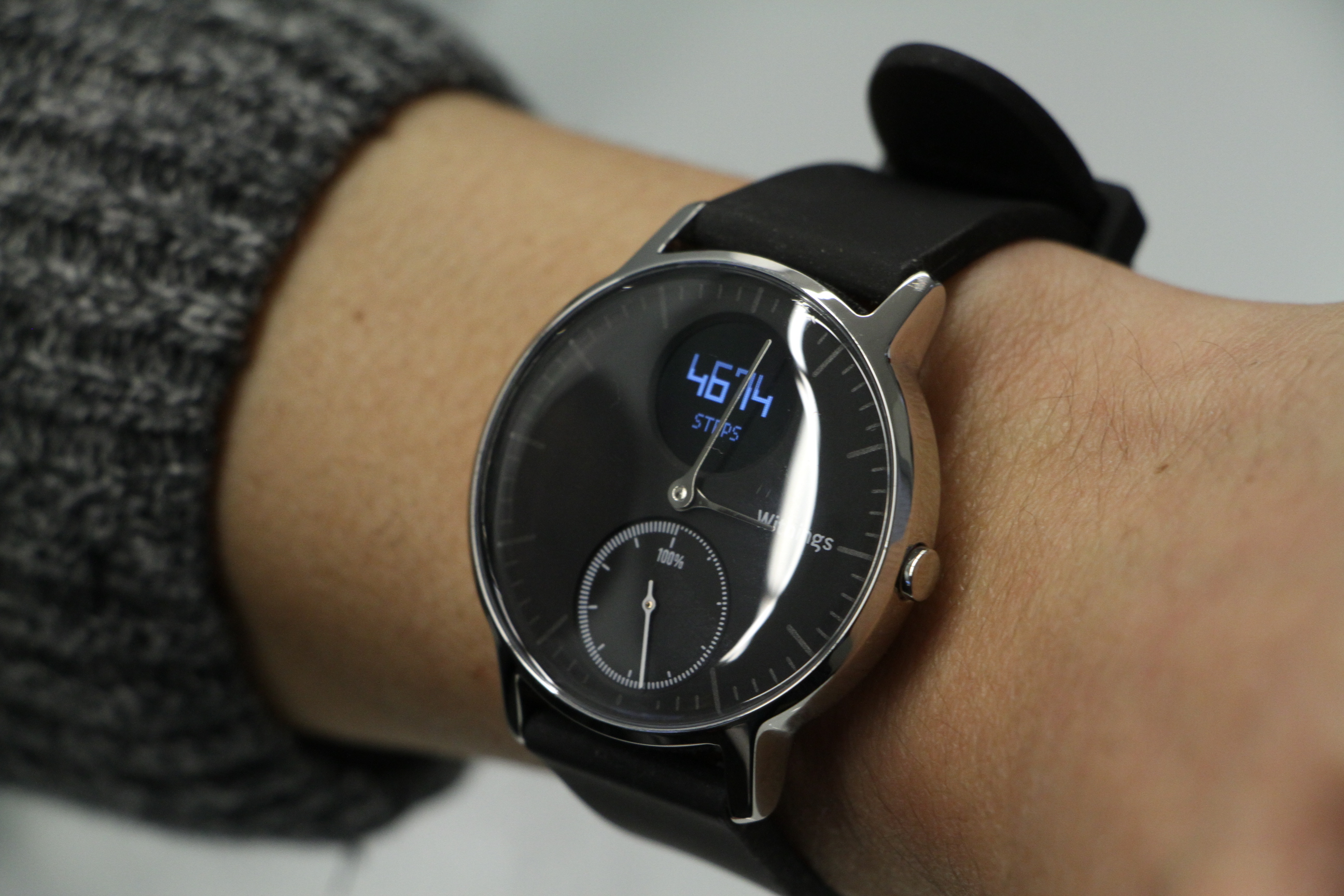 So, just how much smart do you want in your smartwatch? It’s a tricky question. Others have opted for straight haptics for notifications, which devices like the Phase present as a sort of stop-gap — in Misfit’s case, a combination of arm movements and colored circles that can be a bit indecipherable. Withings has gone a similar route as Martian, with a low-powered, small window that shows off some very basic information.

It’s a nice compromise. The display is mostly off. That means it’s a minimal power drain and not distracting from the watch’s basic functionality as a timekeeper. Pressing the button on the right side of the watch will activate the screen, showing the time in a low-res monochrome blue text. Another press brings up the wearer’s heart rate, then steps walked, distance traveled and alarm. Holding it down will start a timer.

The display will also field notifications, though there are only three options currently available through the Withings app: calendar, messages and calls. When one of those pop up, you’ll see a small icon for the service, along with scrolling text.

It’s a nice compromise. Simply getting a buzz on the device kind of defeats one of the principle purposes of a smartwatch, requiring the wearer to still pull the phone out of their pocket to figure out what all of that vibrating was about in the first place. 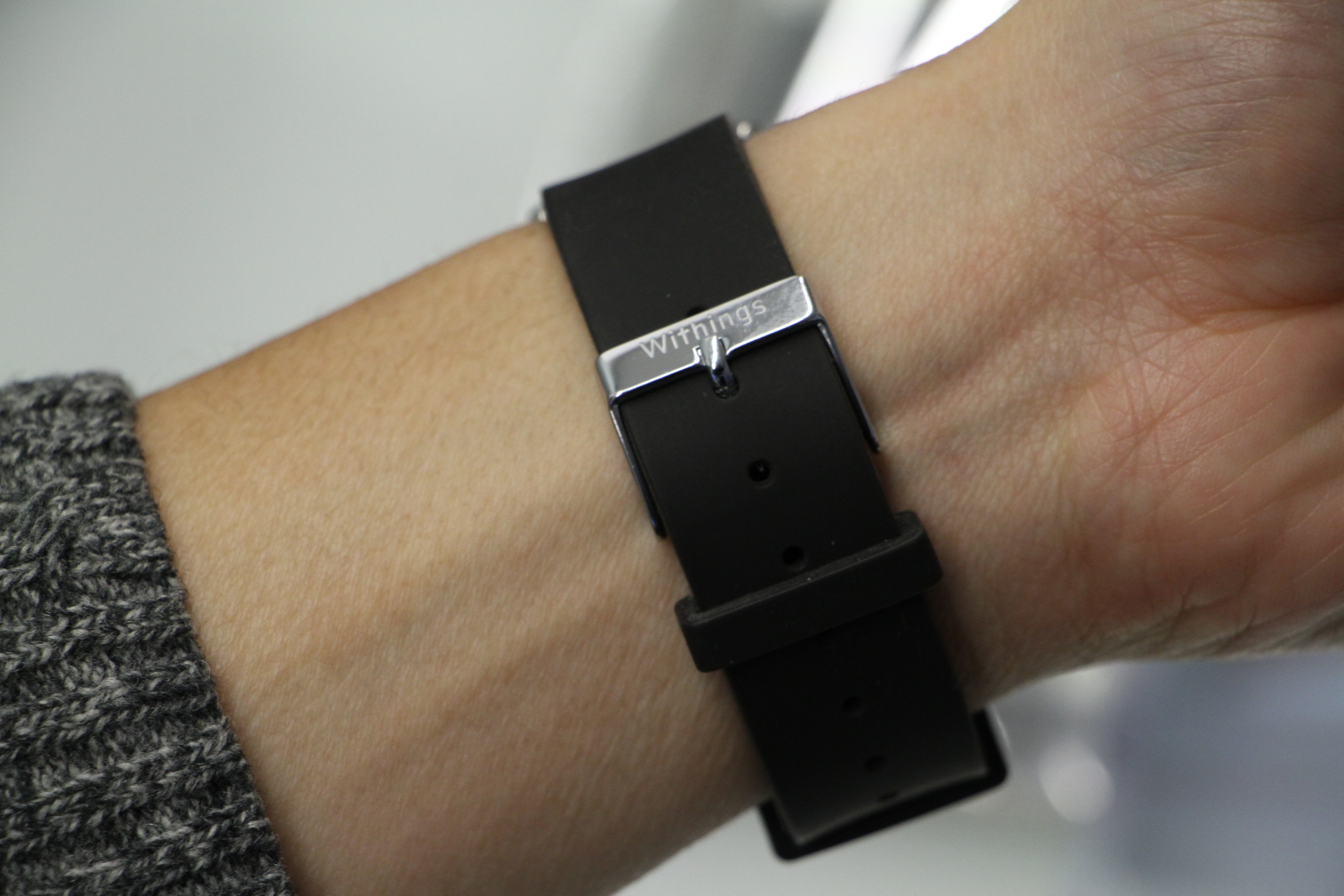 The small, usually off display also means a minimal impact on battery life. The company rates the device at 25 days. I haven’t had time to stretch it to its limit, but I’ve already gone a few days, and the thing is still rated at 91 percent, so I’ve got no doubt it’ll last a long time.

Weirdly, the charging pad leaves something to be desired. It’s a small magnetic circle, similar to the one you get with the Apple Watch, albeit with an extremely weak magnetic draw. I found myself fumbling with the thing a bit, trying to get it to stick — thankfully you’ll only have to deal with that about once a month or so.

The watch is, naturally, water-resistant, going down to 50 meters, which means you can take it for a shower or swim, and sweat on it to your heart’s content. The watch also ships with a silicone strap — not exactly the most aesthetically pleasing, but fairly neutral and good for working out. And when the time comes to switch, the 36 mm and 40 mm use standard 18 mm and 20 mm spring bar straps, respectively. 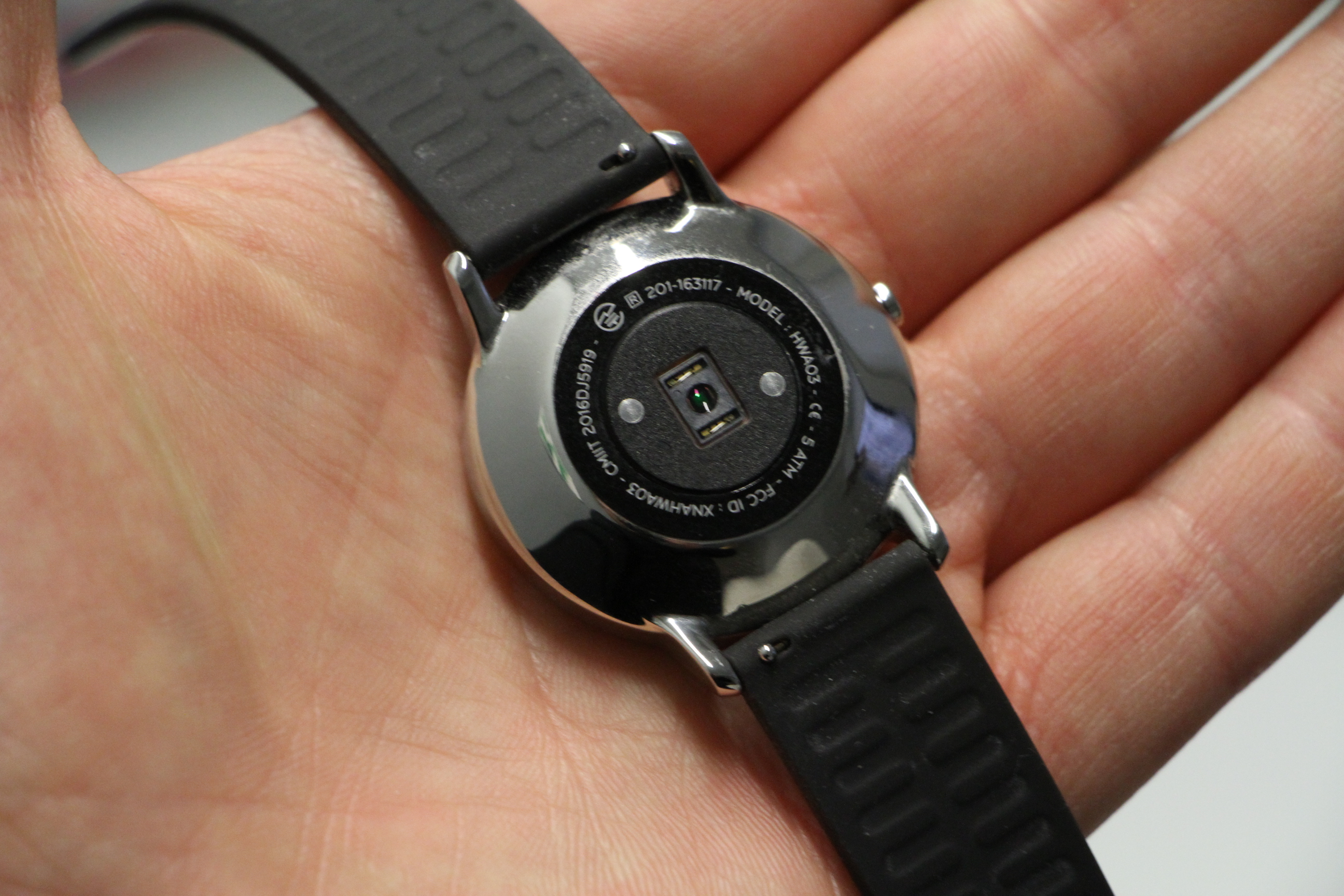 On the back is an optical heart-rate monitor — the same fare you’ll see on most of these devices. It does a good job detecting resting and running heart rate, mapping them out along a timeline on the Withings app.

There’s no built-in GPS here — no surprise, really. The feature has recently become standardized on full smartwatches, but not really hybrids. There’s also no built-in storage, so you’re not going to be able to leave your phone at home and still listen to music. Not that you’d necessarily want to try with such a small display. 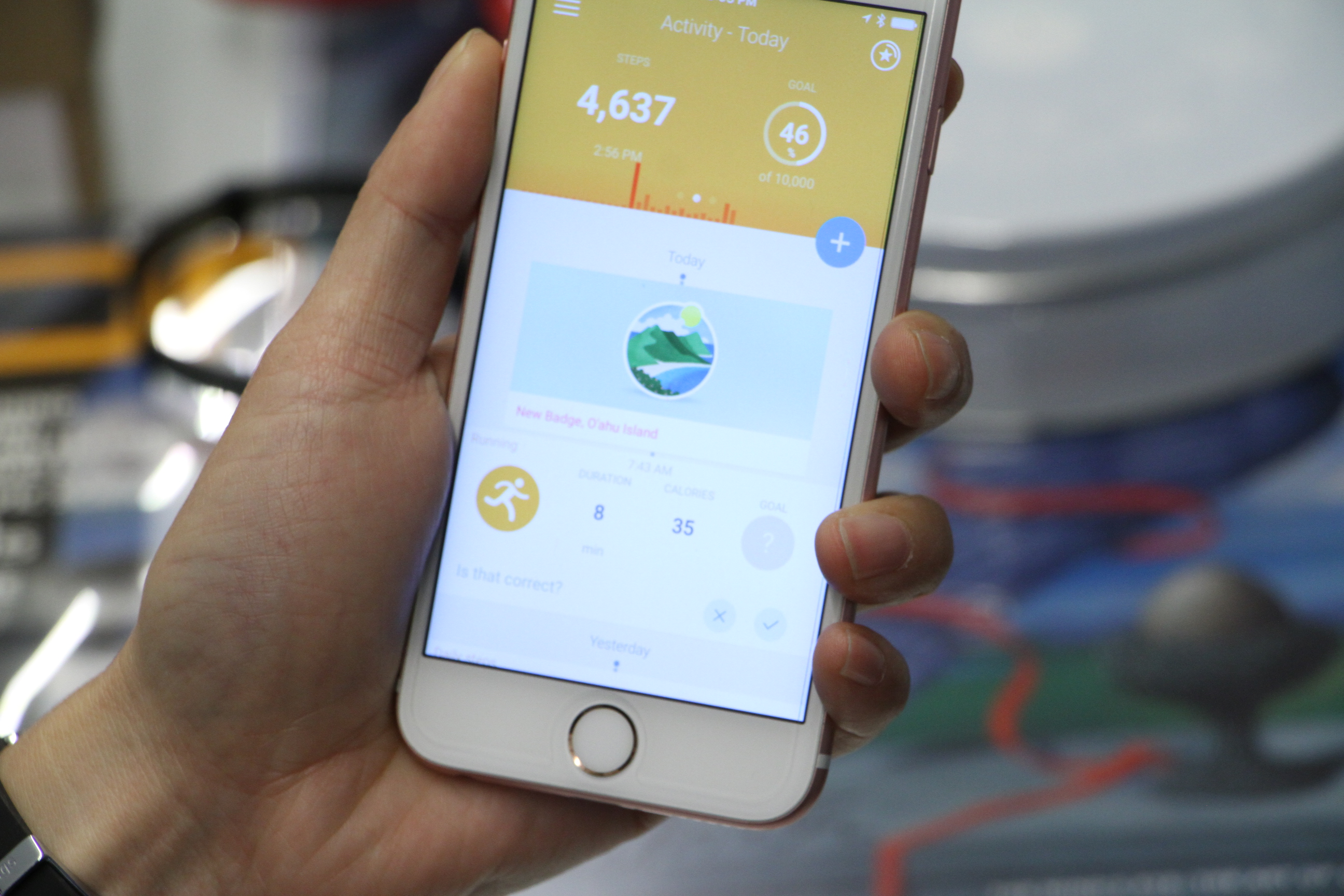 In fact, you’re going to rely on the app for a lot of control here. You’ll need it to check battery levels and adjust the brightness of the little display. It’s also used to set alarms and adjust notifications. Without the app, well, it’s just a regular old watch.

The app itself is the same one used across Withings’ other fitness devices. That means you’ll be able to sync your health info with other products like its scales and blood pressure monitor. The downside is the app feels like a bit of a mess. It’s kind of all over the place and a bit hard to get one’s bearings with a variety of different metrics mashed together. 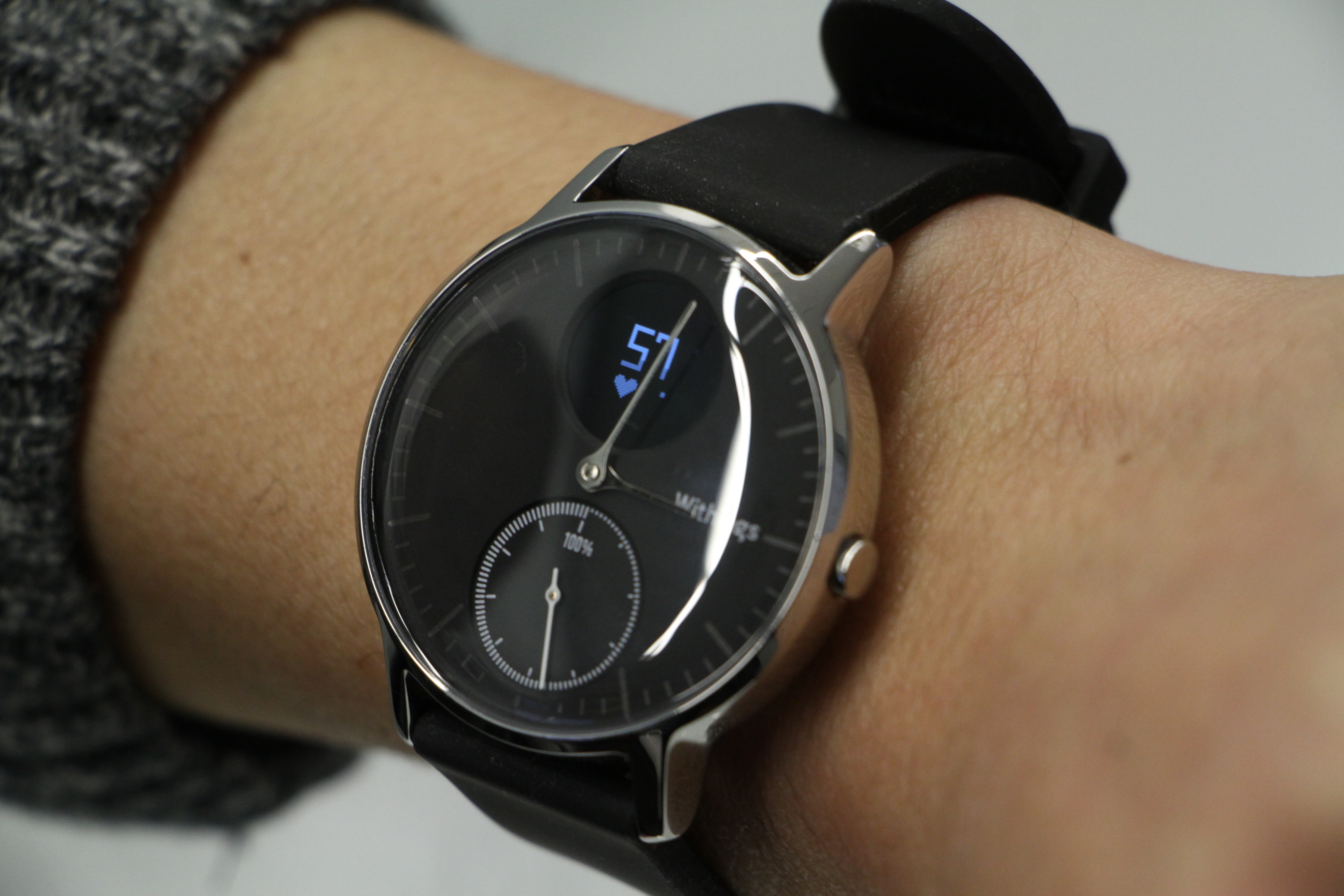 Priced at $180 for the 36 mm and $200 for the 40 mm, the Steel HR is pretty much inline with other hybrid smartwatches out there. It’s a well-designed piece of hardware that gains a lot of points for simplicity, while making good on its smartwatch promises.

The Withings app can use some freshening up, but on the whole, you’d be hard pressed to find a better hybrid.