As per tradition, Google’s Santa Tracker is live today across Android, Google Maps and Google.com, helping parents and children alike track Santa’s journey from the North Pole as he begins to deliver Christmas presents all over the world. iOS users can also keep an eye on Santa using the Google Maps app on their iPhone or iPad, plus Santa’s journey can be streamed to your TV via Chromecast, says Google.

You can ask Google Assistant about Santa, too, by saying things like “Where’s Santa?” or “Track Santa.” You can even ask it to tell you a Santa joke. 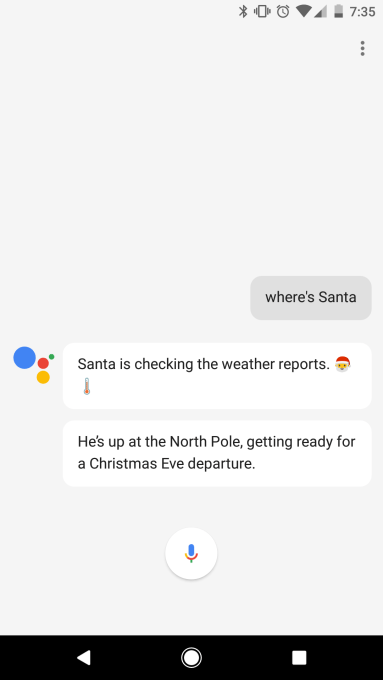 But Google’s Santa Tracker website is really the one to visit these days, as it goes far beyond simply plotting good ol’ Kris Kringle on the map. The site itself has been filling throughout the month with activities for the little ones, including a number of games and videos featuring cute animated characters, as well as educational material about the place where Santa is now. Kids can see a photo from that city and read a short description. 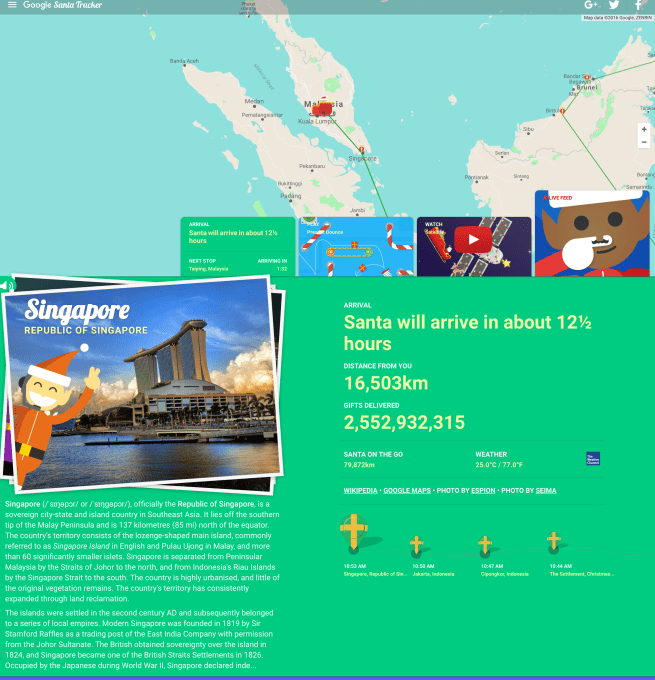 A real-time tracker on the site also lets kids see exactly how far away Santa is from them, how many gifts he’s delivered so far, and — most importantly — how long it will be until he reaches their house.

And at the bottom of the page, a link will take you over to Santa’s village, a site that’s a mini-town filled with more games, places to explore and other spots where kids can learn a new skill. For example, a “learn to code” game teaches programming basics by piecing together pictures of holiday characters, like elves and reindeer, before advancing to harder tasks. Another has you ordering shapes to make a picture of a snowflake.

A different learning spot takes advantage of Google Translate to teach kids how to say things like “Santa Claus” and “Ho Ho Ho” in other languages.

While Google’s Santa Tracker can keep children engaged for quite some time, it’s not the only tracking site available.

The classic NORAD Santa tracker got its start over 60 years ago, and also tallies the gifts delivered, time to Santa’s next stop and where Santa was last seen. But compared with Google’s fun-filled site, NORAD’s is a little boring. It’s just an animated Santa sleigh and reindeer flying across a map. And although there are photos of where Santa has been, clicking on them only pops up a Wikipedia page. 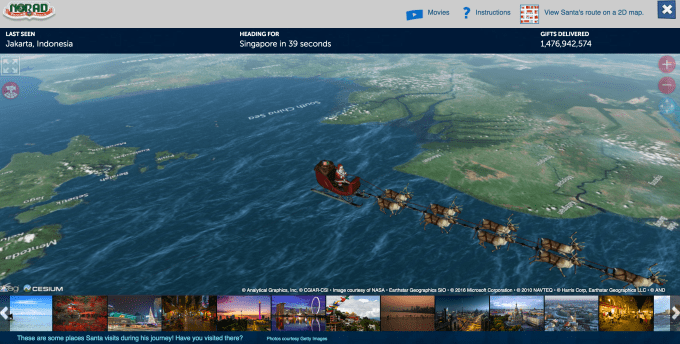 But both sites can serve a purpose, though! If you want to distract the kids so you can get some last-minute gift wrapping done, point them to Google’s. If it’s time for bed, load up NORAD’s site instead. They’ll tire of it quickly, and be lulled to sleep.