Facebook removed content from social justice activist and co-founder of Safety Pin Box Leslie Mac, and banned her from the social network. The ban was originally in effect for 24 hours. Update: As of 11:50 a.m. PT, Facebook has restored the content and reinstated Mac’s abilities to use the social network.*

“A member of our team accidentally removed something you posted on Facebook,” Mac received as a notification on Facebook. “This was a mistake, and we sincerely apologize for this error. We’ve since restored the content, and you should now be able to see it.”

But there are still questions that need to be answered, such as why and how did this happen, and what, if anything, will happen to the Facebook staffer responsible for it?

Update: A Facebook spokesperson has since told TechCrunch, “We’re very sorry about this mistake. The post and profile were removed in error and restored as soon as we were able to investigate. Our team processes millions of reports each week, and we sometimes get things wrong.”

Actor Matt McGorry shared her post in support, and that’s when things went awry, Mac told me. When she noticed that there were over 500 people who shared her post, she went to McGorry’s page and saw that the thread “was an ocean of white tears” and people calling Mac a “reverse racist.” 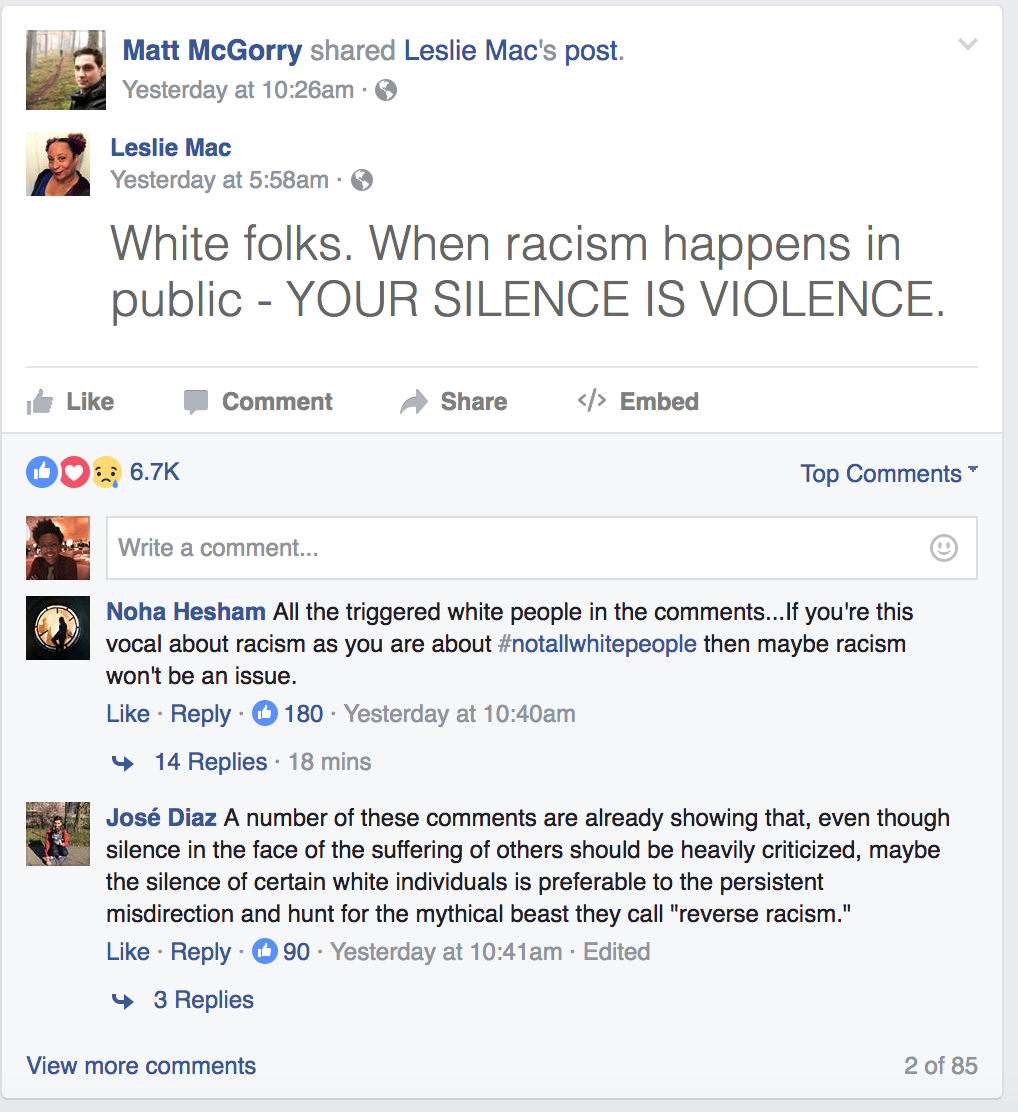 “The question becomes, what is Matt’s responsibility in this scenario?” Mac wondered. “There’s this piece about responsibility when we have large follower counts and lots of people who follow us, and what that means for the people you expose to that audience. I wouldn’t say it’s his fault, but I would say it’s a responsibility.”

Ultimately, the issue seems to be that a bunch McGorry’s followers disagreed with Mac’s post and then reported it to Facebook. Given that Mac’s post doesn’t seem to violate any of Facebook’s community standards, what might have happened was that there was such a high volume of people reporting the post that Facebook just automatically took it down and then banned her.

“Do I think Facebook is like, we hate Leslie Mac? No,” Mac said. “But what their systems allow is people to attack people of color with no recourse and to take those people’s opinions as fact. That’s where the deliberacy is existing.”

This isn’t the first time Facebook has done something like this.In September, Facebook briefly suspended activist and journalist Shaun King for posting a racist email he received. In July, Facebook took down live video of the murder of Philando Castille, and later blamed it on a technical glitch.

I’ve also reached out to McGorry and plan to update this story if I hear back.