Apple’s recently launched standalone support application is now hitting the U.S. App Store. The app, which had quietly debuted last month outside the U.S., lets you access product documentation, schedule appointments, as well as chat, email or schedule calls with an Apple Support technician, among other things.

While the ability to look for nearby stores and schedule appointments at the Genius Bar was previously available through the Apple Store app, this feature was a bit buried among a variety of other functions. In addition, Apple’s “Tips” app that launched with iOS 8 was not well-received, and was quickly archived to users’ Apple junk apps folder.

The new Apple Support app, as it’s called, is more useful because it centralizes all the product information and provides a more streamlined way to access customer support, when needed. 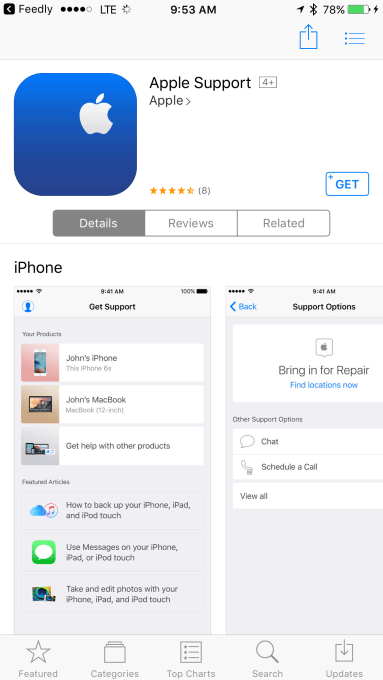 In addition, the app is personalized to each user. That is, the app recognizes all your iCloud-registered devices so you don’t have to figure out details like what model of iPhone or Mac computer you have. (Yes, in the real world, many people don’t obsessively keep track of this information – they just know they bought “the new iPhone.”)

This personalization allows customers to get just the product and support documentation that pertains to their devices. And it can speed things up when communicating with a support rep, too, as they won’t waste time figuring out their device details.

Apple customers will also be able to launch a native chat with an Apple service expert right in the app, and they can view their support case history when the session wraps.

If an in-store appointment is required, users can schedule this in the app and receive a reminder notifications. Plus, the app can help point users to authorized repair providers in the local area, as well.

The app’s arrival hits at one of the busiest times of the year – the U.S. holidays, when many people are unwrapping their new Apple devices for the first time, and potentially running into issues or having questions. That’s a trial-by-fire for a new service like this.

However, Apple has at least tested the app in the wild for around a month – the app launched in the Netherlands App Store in November ahead of its U.S. arrival.

Apple says additional countries will also receive the app in the coming weeks.