The top two streaming services won’t be dominating the Golden Globes this year, despite the investments Netflix and Amazon have made into funding their own original content. In fact, Netflix is having a down year — with just five TV nominations, that’s the lowest number of nods it’s received since entering the race three years ago, Variety notes. Amazon also received five nominations for its TV series, while Hulu had none. Amazon and Netflix together received a few film nods, too.

Netflix has never won a Golden Globe for any of its TV series, but last year a half a dozen shows earned a nomination from the Globes, including “Bloodline,” “Grace and Frankie,” “House of Cards,” “Master of None,” “Orange is the New Black” and “Narcos.”

This year, none of those shows were nominated even once.

The Golden Globes also failed to recognize other popular Netflix series, including “Unbreakable Kimmy Schmidt,” “The Get Down” and the rebooted “Gilmore Girls.”

Netflix reportedly spent $130 million on the “The Crown,” so it’s likely hoping that investment can be recouped with its first Globe win. 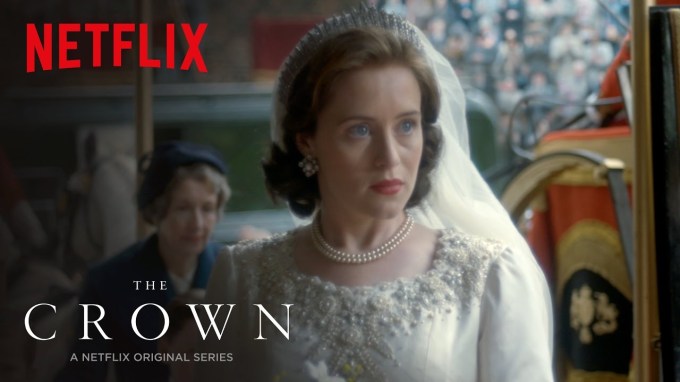 Meanwhile, Amazon broke even with last year with another five nominations. The Globes played favorites, as Amazon’s shows “Mozart in the Jungle” and “Transparent” returned to earn noms for best comedy and best actor. “Goliath” also earned a nomination for lead actor Billy Bob Thornton.

Amazon’s other series, including “The Man in the High Castle,” Woody Allen’s “Crisis in Six Scenes,” “One Mississippi,” “Catastrophe” and “Fleabag” didn’t receive any Golden Globe attention.

However, Amazon still has bragging rights thanks to its wins in prior years for “Mozart” and its star Gael Garcia Bernal, as well as “Transparent” and its lead, Jeffrey Tambor.

This year, Hulu was shut out of the race, after receiving its first-ever Golden Globe nomination last year for “Casual.” The only other series it had that were eligible this year included “Chance” and “The Path.”

On the film side, both Amazon and Netflix did better. Amazon’s “Manchester by the Sea” earned five nominations. Amazon also received one nom for its foreign language film “The Salesman,” where it will compete with Netflix’s “Divines.”

HBO last year lost the top spot to Netflix in terms of number of TV nominations. This year, it’s back with 14 nods, thanks to series including “Westworld,” “The Night Of,” “Veep,” “Game of Thrones,” “Insecure” and “Divorce,” along with its films “All the Way” and “Confirmation.”