Facebook is launching a series of new features to help people customize their photos and videos in the social network’s continuing battle with Snapchat, an app that put the camera, photos and video at the front-and-center of social interactions. Today, Facebook is unveiling a new tool that will allow anyone, including Facebook Page owners, to create custom profile frames for users’ photos. It’s also introducing similar capabilities, along with other effects that can be used on both photos and videos, with its new “in-app camera” available in a single test market.

Using a simple online tool that doesn’t require any technical skills — only graphic design skills — anyone can develop and then submit frames that can be used by others on Facebook. The frames can support teams, causes, businesses, events or anything else someone wants to promote.

To create a frame, you’ll first create your design in your favorite software program and export it as a PNG file with a transparent background for each element. This frame is then uploaded to Facebook, where you can preview it in different sizes, and you can add other details. The final step is to submit the frame for approval. 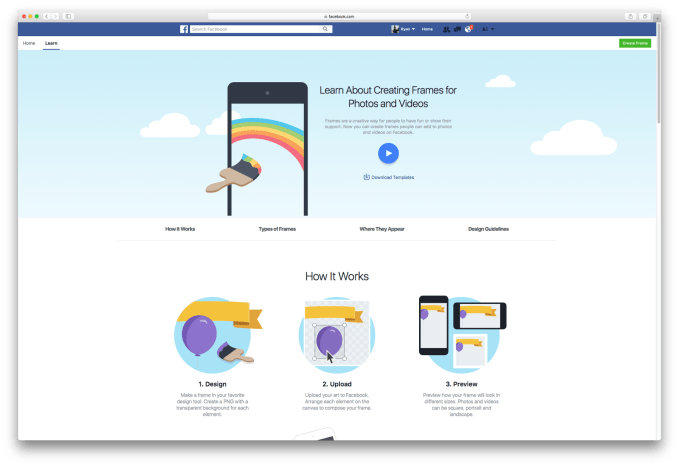 Facebook says that frames must adhere to its policies and terms in order to go live. This approval process means no one can launch frame content that’s offensive or illegal. Plus, the company reserves the right to take down any frames retroactively if they’re later discovered to be in violation.

Unfortunately, Facebook isn’t making this Camera Effects Platform available in the U.S. at launch. Instead, the tool will initially be open to those in Colombia, Mexico, Taiwan, the U.K. and Ireland. The company explains to TechCrunch that these markets were chosen because they’re where the profile frames have been used the most to date. 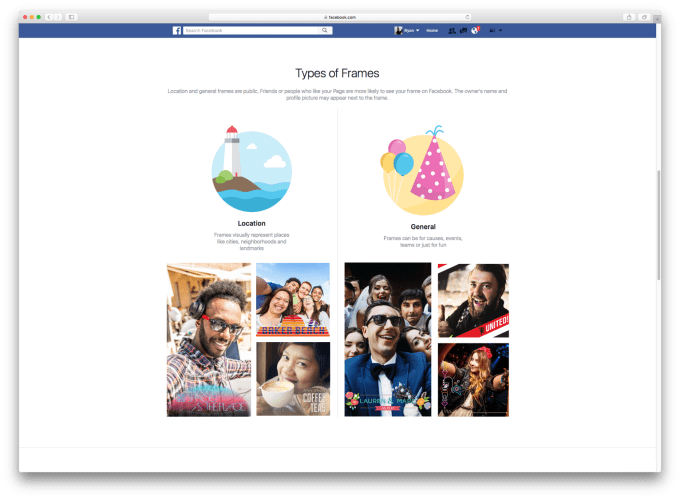 Most of the current frames are focused on sports, but despite the addition of popular U.S. sports, like NFL, NHL, college sports and more, the U.S. hasn’t been as big on frames as other markets, it seems. Being able to personalize them, or adopt those that go beyond sports and major events, could eventually change that.

Ireland was selected to be in the launch group because it’s also the test market for Facebook’s new in-app camera.

Launched this fall, the in-app camera is essentially a Snapchat clone that includes animated selfie masks, overlaid graphics, Prisma-style art filters, geofilters and even some “reactive” filters that respond to body movements.

Ireland is the only market with access to this camera, though the feature was briefly testing in Canada and Brazil during the Olympics.

With the new Camera Effects Platform now available, Ireland will gain access to some additional functionality, including the ability to track frame usage. 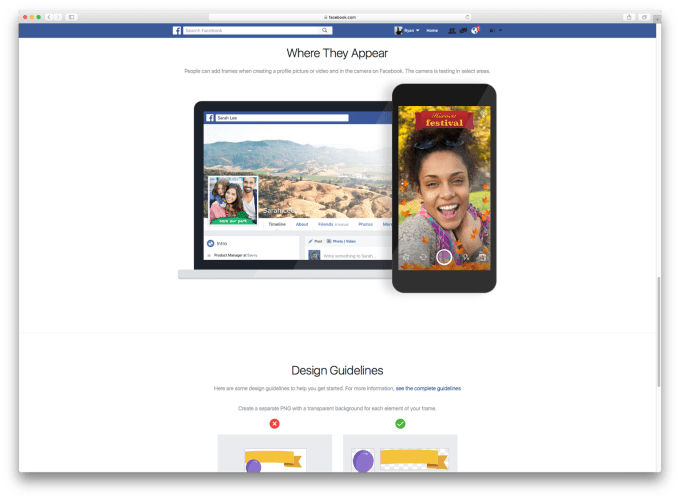 Users there will also be able to create frames that can appear in the in-app camera, in addition to seeing them appear in News Feed, as in the other markets.

Ireland will be able to create “location frames,” too, which are those that visually represent a given locale, like a neighborhood, city or landmark. These can be used on photos and videos, and shared within the in-app camera.

The idea here is that these geofiltered frames would only pop up in the camera when you were at the location. For example, if you were taking a picture at a private location or business, like a restaurant, you would see the option to add the frame the restaurant’s owner had created. Other location frames will only be seen in the camera by the creator’s friends when they’re near the location.

Snapchat already offers the ability to create your own geofilters, of course. It was only a matter of time before Facebook made a similar move. In addition, as TechCrunch writer Josh Constine noted earlier, Facebook would eventually need to create its own camera effects platform because it couldn’t possibly build every filter or lens people want.

Facebook says it will make other improvements to this in-app camera, beyond this latest functionality, before it rolls out the feature worldwide.

The company says that the U.S. and other countries will be able to use the Camera Effects Platform in the future, but couldn’t promise when the global launch would occur.