There I was on a comfy gray couch, surrounded by pillows and being handed an eye mask in a reserved office space in downtown San Francisco when, next thing I knew, Michael Acton Smith, co-founder of Calm was tucking me in and spraying a relaxing mist over my body.

“Sweet dreams,” said his comms person as the two shut the door. That’s when Tamara began to speak…

Tamara, in case you were wondering, is the woman behind the voice of many of Calm’s new Sleep Stories feature. Tamara’s soothing voice takes you on a safe, droning mental journey meant to lead you to zonk out and have good dreams.

As Smith explains, “It’s kind of like bedtime stories for grown-ups.”

Two days ago I went to take a nap for work. The makers of Calm, the aforementioned app for relaxing meditations, had invited me to try out a Sleep Story for myself. So napping, naturally, was part of the meeting and I was invited to try to rest for 20 minutes to a story about a waterfall.

And to be honest, at first I thought, because of the rushing water, I might have to pee. But soon thereafter began to drift into a relaxed state, forgetting where I was for a moment.

Lucky for me I don’t usually need extra help falling asleep. And, not one to voluntarily give up extra time under the covers, I’m one of those who sleeps extra on the weekends, too. But insomnia is a massive problem, affecting an estimated 50 to 70 million U.S. adults — and one Smith and his co-founder Alex Tew aim to solve through droning stories that get your mind to relax enough to nod off. 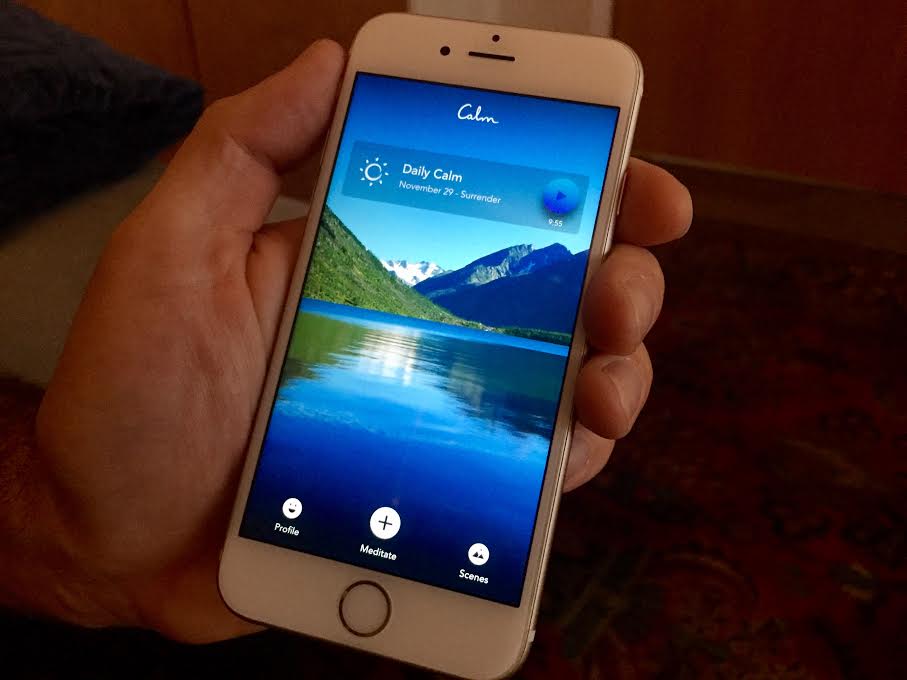 Calm launched in 2013 as an online relaxation resource and falls into the same vein as other apps trying to tackle the problem of getting to sleep such as Awoken, Deep Sleep with Andrew Johnson and Digipill.

Calm has raised $1.5 million from angels since launching and now claims 6 million active users and positive revenues – though Smith says he may start looking to raise new funding sometime next year.

Calm also says it also has a pretty popular kids bedtime stories version and would like to introduce celebrity voices in the near future. Smith, who wants to pair the online with the offline, also mentioned possibly opening up a Calm-branded hotel at some point.

“Sleep has become the new rock n’ roll,” Smith says. “We want to build the Nike for the mind.”

So did I fall asleep to the Sleep Story selected for me? No. But I actually think I would have if it weren’t in the middle of the day, in a strange office and I wasn’t being pinged by work emails and texts at the same time.

“So many of us try to get in one more email or twitter or Facebook. Our brains are so wired and stressed,” Smith told me, adding, “The irony isn’t lost on us that we are using the phone for this.”

But if you do happen to turn off those notifications and prepare to get some zzz’s, I could see there’s a very good probability you’ll at least feel more relaxed at the end.

For those interested in checking out the new Sleep Stories feature, the Calm app works on both iOS and Android and costs $12.99 per month (or $60 for the year) to access the hundreds of meditations, bedtime stories and other relaxing journeys.