It’s getting harder to get people to try new mobile applications, according to a new state of the industry report out now from Adobe, as consumers are sticking to what they know when it comes to the apps on their smartphones. App abandonment is also climbing, and app installs are only up 6 percent year-over-year, the report states. Meanwhile, launches of existing apps are much higher, with 24 percent year-over-year growth.

That trend is even more pronounced for the top mobile applications (the top 20 percentile), where app launches are growing at a massive 62 percent year-over-year. 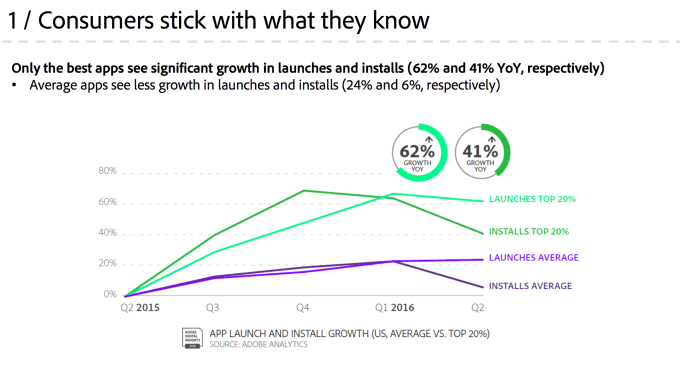 These figures come from Adobe’s annual mobile benchmark report, which is based on analysis of over 290 billion visits from 16,000+ mobile sites and 85+ billion app launches.

In addition to the challenges new apps face to even get installed on devices in the first place, many apps are also very quickly discarded after their first install.

There are a number of reasons why people delete their apps, but “not useful” is the most common those surveyed cited. (In the case of survey data, Adobe spoke with more than 1,000 mobile consumers).

Games are deleted often, as well, and this is likely due to their shorter life cycle. Adobe says it’s loss of interest and too many other choices, which is another way of saying that people view games as disposable.

In terms of app categories that are seeing growth in terms of launches, there are a few that stand out: double-digit growth (YoY) in average app launches is seen with: financial services (29 percent), travel (28 percent), shopping (24 percent), automotive (21 percent) and media & entertainment (14 percent) says Adobe.

In addition to growth in launches, finance apps saw a 20 percent increase in installs in Q1, and their usage maintains throughout Q2 (up 14 percent year-over-year). Meanwhile, shopping apps’ usage increases dramatically in the fourth quarter (up 29 percent quarter-over-quarter), but drops off again in Q1.

The study also confirmed industry trends previously reported elsewhere, such as the fact that iOS still drives the majority of the revenue and app usage, as compared with Android; and that millennials install more apps than other age groups, among other things.

Adobe found, too, that mobile payments haven’t yet taken hold with a number of consumers, as 48 percent said they don’t use any mobile payment methods at all. When they do, Apple Pay and Android Pay are most popular, also unsurprisingly. 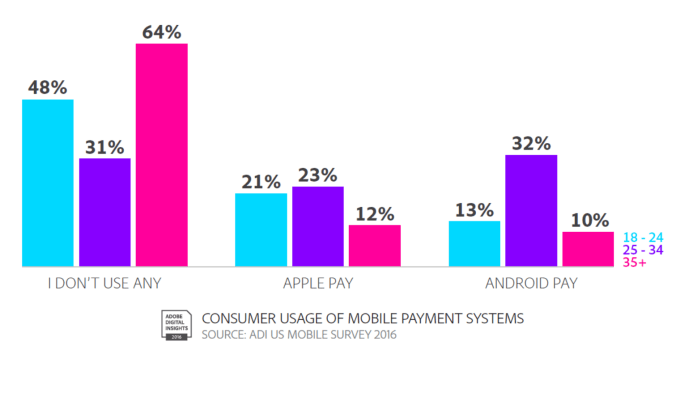 The full report, available directly from Adobe, delves into other areas, too, including mobile website usage, which sees the majority of growth driven by smartphones, and overall internet saturation, with website traffic having only increased by 0.1 percent since January 2013.