If you tend to turn to email to send yourself short reminders, instead of using a more feature-rich to-do list or task-management application, a new app called Later wants to help. Later aims to offer an alternative to Apple’s sometimes cumbersome Reminders by giving you an easier, faster way to set times to be reminded about upcoming tasks, as well as a way to get alerts when you return to your Mac.

The idea for the application comes from three friends based in Latvia: Gustavs Cirulis, a designer at Intercom; Andris Fedotovs, an iOS engineer; and Davis Siksnans, the CEO and co-founder of Printful. The three had previously built other apps, including screenshot organizer Inboard, and a Mac utility called Characters.

According to Siksnans, the team also often turned to email as their go-to reminders application of choice, and had grown frustrated.

“We got tired of sending emails to ourselves to remind us of mundane things,” he says. “Alternative apps like Apple’s iCal or Reminders took too many taps to input a simple reminder. We thought there’s got to be a better app.”

The end result is Later, which is available both on iOS and Mac. While you can use the apps individually, they’re more powerful when combined.

There isn’t an extensive feature list for Later, and that’s by design.

The app is very straightforward to use. Upon first launch, you’re presented with a blank page and flashing cursor. Here, you just type in whatever it is you want to be reminded about, hit the check mark, and you’re then taken to a second screen where you pick a time. 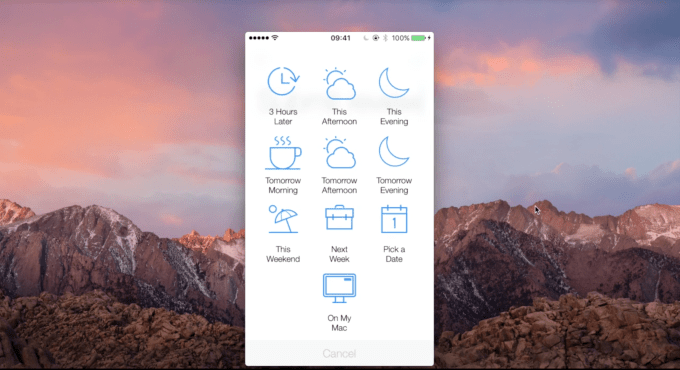 Instead of the date and time picker, which many of us find tedious to use, the screen offers a variety of time presets as buttons you just tap. For example, there are buttons for “3 Hours Later,” “This Evening,” “Tomorrow Morning,” “Next Week” and so on. If you absolutely need to set a specific date, however, there’s an option for that, too.

But one of the app’s better features is the button that says “On My Mac.” What this means is that if you also have Later’s Mac app installed, you can trigger an alert when you return to your computer. Your reminders will sync between both platforms via iCloud, so you can enter in new items as they pop into your head, no matter if you’re at your desk or out-and-about.

Unfortunately, you can’t set a Mac reminder to pop up the next time you unlock your phone, because that’s not something Apple currently allows, Siksnans says, but the team is thinking about ways to work around that problem — for instance, by using motion tracking, perhaps.

The iOS app is free, but the Mac app to complete the solution is a $4.99 download. That’s a launch special discount though — the app will be $9.99 in the future. While the simplicity is what makes Later interesting, people may balk at the higher price point for such a no-frills application.

That being said, it’s always refreshing to see apps that understand how to best take advantage of mobile. On-the-go users don’t want to fill out sign-up forms, watch tutorials or face a steep learning curve just to use what should be a basic utility. Later gets that, by taking you right to the experience. It takes only a few seconds to get going. In fact, the download of the app itself takes longer than creating your first reminder.

The app is free on iTunes here, and a paid download on the Mac App Store.