Earlier this year, Apple promised it would clean up its iOS App Store by removing outdated, abandoned apps, including those that no longer meet current guidelines or don’t function as intended. That great App Store purge now appears to be underway, according to new data from app intelligence firm Sensor Tower. The company found that app removals increased by 238 percent in October 2016, with mobile games seeing the most deletions.

Apple had originally stated that the deadline for developers who wanted their outdated apps spared was September 7, 2016. However, Apple didn’t take immediate action during the month in terms of large-scale removals.

That seems to have changed in October, when 47,300 apps were removed from the App Store, Sensor Tower discovered.

And while it’s true that Apple does delete apps on a regular basis, this figure is around 3.4 times higher than the monthly average of 14,000 for the months of January through September. (See chart below). 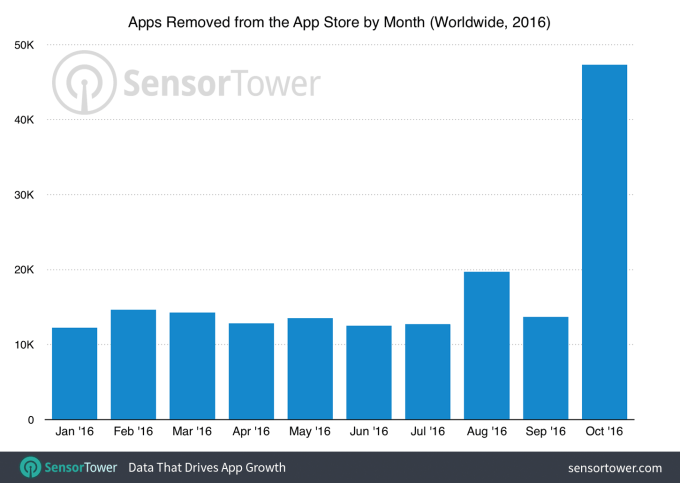 The figure indicates that Apple is making good on its intention to remove the cruft from its App Store, as earlier stated.

Given that “Games” is one of the the largest, most popular, and highly-trafficked categories on the App Store, it’s not surprising that it also saw the most deletions. The report found that of the 47,300 total apps removed, around 28 percent were games. This category was followed by Entertainment, Books, Education and Lifestyle.

But there were far fewer deleted apps in the non-game categories. Entertainment and Books were practically tied for second place at 8.99 percent and 8.96 percent, respectively. Education and Lifestyle were even further behind, at 7 percent and 6 percent.

What we don’t know for sure is how Apple will define “abandoned.” In its message to developers this fall, the company said that in addition to those that don’t meet the current review guidelines or don’t work as intended, it would also remove apps that “have not been supported with compatibility updates for a long time.” (Emphasis ours.)

That statement is vague on purpose – it gives Apple the ability to make judgement calls on individual apps, without having to commit to a hard rule in terms of when the app was last updated.

Despite this big cleanup, the App Store itself is still growing. Sensor Tower estimates that it could more than double in size by 2020, with 5 million apps available.

Apple, in addition, said that around 100,000 new and updated apps are submitted each week, and the store itself has over 2 million total apps. And with the launch of the iMessage App Store, where iOS apps can include extensions that let them be surfaced through the iMessage interface, Apple’s app marketplace will continue to expand.