Daniel Singer Contributor
Daniel Singer is the Product Manager at Sensay in sunny Santa Monica and writer of Disrupt Cards.

Snapchat has lived on my home screen since when it took the LA high school scene by storm in 2012. Evan Spiegel first launched at his old high school in Los Angeles, which was down the street from my house. The simple concept of doodling on pictures of my friends on Snapchat was what I first fell in love with, then came stories and the rest was history. I was hooked – which makes me basically the ideal test case for Spectacles.

Since then, Snapchat has exploded and morphed from a silly distraction during class into a worldwide social media phenomenon. And after hearing about the Spectacles launch on Twitter I was even more excited about Snap’s future. I wasn’t sure if I was going to buy them, but I knew they were going to be huge.

Believe it or not, a man in an Elmo costume convinced me to buy Spectacles. While taking a phone call on the roof of my office overlooking Santa Monica 3rd St. Promenade, A man in an Elmo costume was surrounded and arrested by multiple police officers. I wanted to capture the moment, but couldn’t – my phone was pressed against my ear. All I could think about was how easily it could have been recordable with a pair of Spectacles.

My fascination quickly turned into an obsession. I dug around on the Spectacles website, trying to figure out when they’d launch or how the online shop would work. I tweeted up a storm trying to see if anybody knew anything. As luck would have it, the first Snapbot appeared in Venice the very next morning. 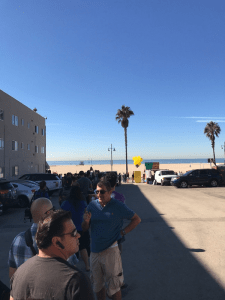 The line was four and a half hours deep when I arrived Friday morning. The Snapbot was refilled three separate times (we estimated the Snapbot can hold about 200 Spectacles, so that means around 800 or so sold throughout the day). Me and those around me played games in line, sharing inside jokes about the Valley while we marched forward toward the blinking, yellow box on the side of the street. When I finally arrived to the Snapbot, I was informed I could only purchase one – normally customers can buy as many as two, but they were running out. I plugged my credit card in, and they were mine.

Setup was fairly simple: You just put them on, open up the Snapchat pairing screen, and press the record button on the glasses. It took about fifteen seconds to pair, after which you can name your Specs. While a name might seem trivial, it plays an important role: only standard definition footage streams automatically to Snapchat. If you want to save HD footage, you need to connect over WiFi, using a network that uses your Spectacles’ name. It’s the lone pain in the ass of using them overall. In the end I named my Specs “InSPECtor Gadget 😎”. Yeah, I know. I’m a nerd. 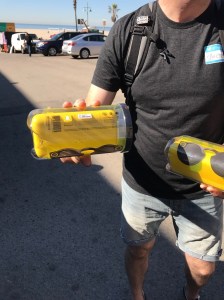 I like to think of my new Spectacles first and foremost as sunglasses. They’re significantly cheaper than a pair of Ray-Bans ($129 for Specs vs. around $169), come with nicer lenses, the frames are beautiful, and they weigh only slightly more. And the image quality from the camera? Spec-tacular.

Recording a Snap is as easy as tapping the top left of the frame. An inner white light shines into your eyes to indicate a live recording, and the LED ring begins to spin on the outside. The default duration is ten seconds, and the inner light will begin to flash as a warning three seconds before the recording stops. Want to continue? Just hit the frame again, and it will queue up another ten seconds of video.

I didn’t even realize the Spectacles had batteries. I used them quite heavily in the first few days and didn’t run out of juice. The charging case is great for when I’m inside or back home and not snapping, and it tops them up each night for a whole new day of adventures. The Specs don’t always line up with the charging case on the first try, but this is some “first generation iPhone stuff” here as my good friend, David Byttow, remarked.

To fully test out the Spectacles experience, I took over the Product Hunt Snapchat for a day. They’re great for capturing both the mundane and interesting aspects of my life in Santa Monica that my friends otherwise wouldn’t get to see, like sitting in traffic on the 10 Freeway on my way to work.

After reviewing my videos from the past few days, the perspective was completely different and more accurate than anything I’ve seen apart from a GoPro strapped to my head. Circular video is the closest digital media format to replicating what we see and remember in our memories.

Everyone on Product Hunt, my friends, and even my little brother loved turning their phones to see the video from my (circular) point of view.

Even if I don’t use the camera, my Spectacles are a keeper: they’re the perfect pair of sunglasses, and it’s reassuring to know that I can capture something without fumbling through my pockets looking for my phone. If you don’t tend to wear sunglasses regularly, they can be slightly intrusive or bothersome, but I can only imagine that as Spectacles become more commonplace, versions with clear lenses will be released for indoor use as well.

In-app purchases (IAP’s) are a distinct possibility in the near future for Spectacles users. Snapchat founder and CEO Evan Spiegel once remarked that Snap, Inc would try to make its money using IAPs.

While this won’t likely be Snap’s main source of revenue, it could become increasingly important as they build an arsenal of tools to better document and share your life either with your friends or, more importantly, for yourself.

I actually found myself routinely snapping experiences that I wanted to keep just for myself — the default choice of keeping every video private was a brilliant product move, and you could see them unlocking more tools for both private preservation and public sharing via IAP.

The Spectacles are also loaded with sensors and microphones that have the ability to accept voice commands, tap gestures, and more. All of that is filled with potential, wrapped in a simple Trojan horse of a quirky pair of sunglasses ready to claim the most valuable real estate: our faces.

Or hey, maybe I’m all wrong. Maybe we’ll see the resurgence of the glasshole, this time as an ‘asstacle.’ With privacy becoming incredibly sparse online, the physical world is becoming one of the few refuges for being able to be yourself with the minimal fear of being recorded for all posterity.

While Snap nailed the look of the Spectacles by making them a non-threatening pair of sunglasses the people will decide what stays and goes.

In my brief time wearing them around downtown Santa Monica only a handful of people recognized what they were and they were mostly from the office next door, as well as the lone Tender Greens waitress who asked if I was filming her. Ultimately, though, I look to the bright side of truly being able to capture moments as you saw them and faster than anything else. Only time will tell.