Fintech is blowing up in Southeast Asia. Toast, a startup that helps make cross-border payments easier and cheaper for migrant workers living overseas, is the latest to help itself to money from investors.

The Singapore-based startup today announced that it has closed a $1.5 million round that it is billing as a ‘pre-Series A’ raise. Aetius Capital led the round, which included participation from US-based 1776 and Australian financial services company Pepper Group.

Toast, like a number of other startups in the region, caters to the large number of migrant workers, who have traditionally been reliant on services like Moneygram or Western Union for sending most of their salary back home to family. Founded in 2015, Toast offers an Android app which takes cross-border remittance digital and cuts out the fees, which can amount to as much as one month of salary over the course of a year of monthly payments.

Rather than burning the current system down and starting afresh, Toast works with existing local remittance stores and kiosks, which help recipients collect money. It does, however, it disintermediates the big firms, like Western Union, who profit the most from these basic overseas transactions.

“We’re not going to replace the banks and traditional lenders, but [we] want to do meaningful partners with people with distribution and access to grow this business,” Toast CEO and founder Aaron Siwoku told TechCrunch in an interview.

Initially, the company used the blockchain and bitcoin to power its service, but it later scrapped that due to concerns over future regulation of cryptocurrencies.

“A lot of companies are using bitcoin because they don’t want to be regulated. Bitcoin and the blockchain are great, but, when I looked at this business, I said we need to be regulated. It’s going to be an advantage to us as we have licenses [that] some people don’t have, [and] at some point the regulation net will come over [bitcoin],” Siwoku explained. 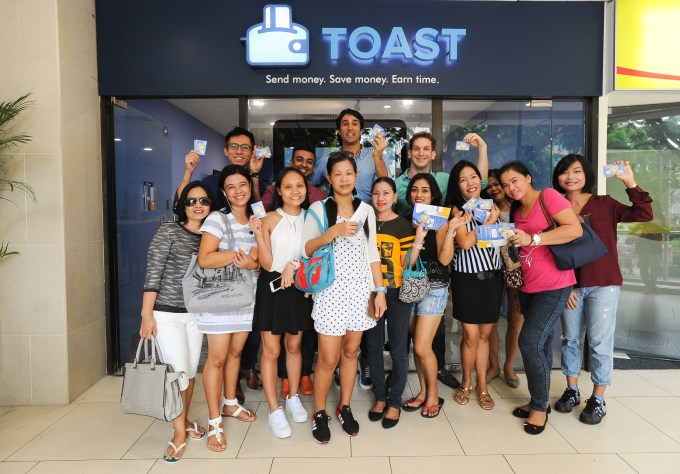 Toast is currently active in Hong Kong and the Philippines — the latter is the world’s third largest market for remittance, at an estimated $29.7 billion per year — and, in line with today’s fundraising reveal, the startup also confirmed it has secured a remittance license in Singapore, where it will soon offer its services.

Siwoku, who is from the UK, got the idea for Toast after observing lines of Filipino workers in Singapore queuing to send money home to family. He noticed that, despite patiently spending hours waiting to be served, each one had a smartphone in their hands.

He said Toast plans to expand to Indonesia in the future, alongside Malaysia, India and Pakistan where he sees much demand for remittance. Later, he added, the company may look to Europe, but that would require additional fundraising and is around 18-24 months away.

Since going live in March, Toast has grown to the point that it processes over $1 million in payments from Hong Kong to the Philippines per month.

Before expanding into new geographies, Siwoku wants to test an expansion of services beyond just basic remittance. That could mean micro-loans and insurance packages for migrant workers in Hong Kong and Singapore, a demographic that is not on the radar for traditional financial institutions because their credit history and ratings are hard to gather.

“We can see cash flow evidence, we know the customer and have historical data for lending and more,” the Toast CEO said.