Many of the polls forecasted an easy win for Democratic nominee Hillary Clinton in the U.S. presidential election, but we now know their prediction models were flawed. While data scientists are scrambling to figure out what went wrong, a number of social media analytics firms are touting the fact that their measurements did a better job of tracking the situation out in the real world, and saw the potential for Trump’s win well in advance.

“Analysts monitoring the social media activity of both campaigns on the major social media channels saw the outcome of this election coming months ago, and kept talking about the massive silent voter base that was forming around the Republican nominee,” said Phil Ross, a social media analyst at Socialbakers.

“Social media analysts continually sounded the alarm that all of the polls were not reflecting the actual situation on the ground in the pre-election landscape,” he added.

It seems, too, that Trump benefitted from that old adage, “any press is good press.”

While the October 7th leak of the Access Hollywood tape was reported as a low moment in the Trump campaign, it expanded his social media audience more than any other until Election Day, Socialbakers found. 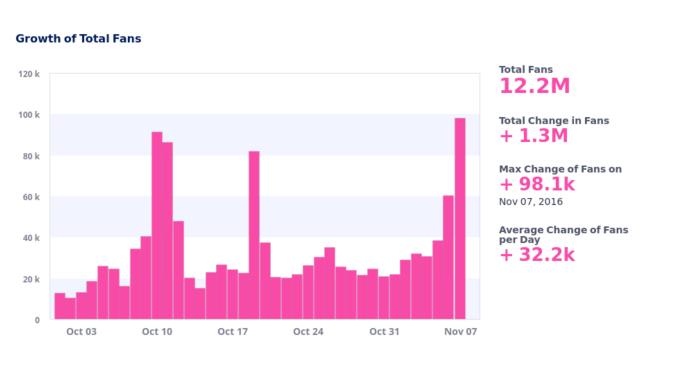 During the campaign, many analytics firms noticed that a growing number of swing voters were engaging with Trump’s messages on social media.

Of course, at the time, it was unclear that social media engagement would translate into real-world votes that could put Trump in the Oval Office. After all, social media is often home to more passive participation when it comes to key matters – and routinely criticized for it.

In a recent example, critics scoffed at the armchair activism of the Facebook Dakota pipeline check-in movement. A million people virtually checked in at Standing Rock after a viral post told them it would protect the protesters in North Dakota from police surveillance. (That wasn’t necessarily the case).

In other words, historically speaking, no one was sure that a like or re-share meant Trump was getting a vote. Especially as the polls told us otherwise. 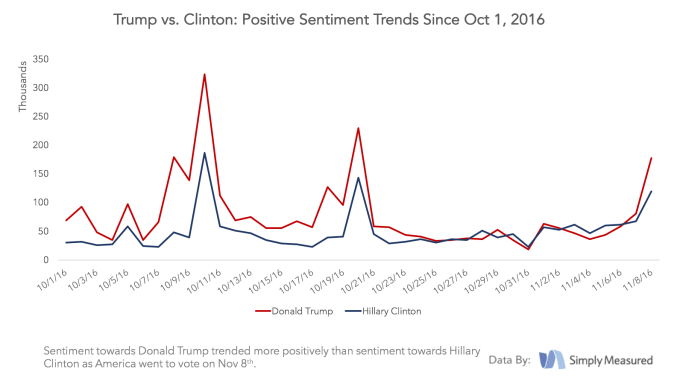 Over the course of the campaign, Trump saw more mentions on social media associated with positive sentiment than his rival, as well. She closed that gap in late October and early November, but the good vibes for Trump soared once again just ahead of November 8th.

Meanwhile, though Trump had trended more negatively than Clinton up until the final debate, negative sentiment was close for the two candidates as they headed into Election Day. 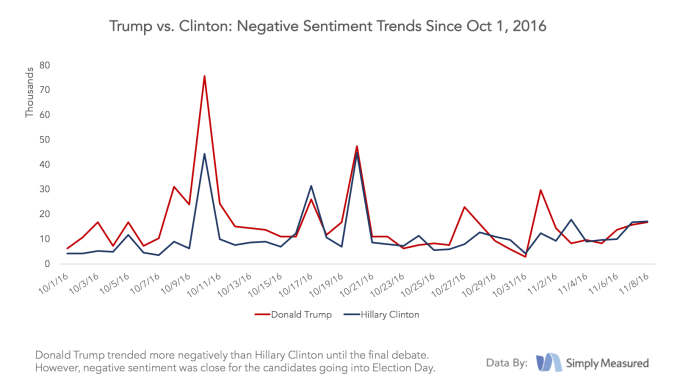 A similar trend was spotted by the analytics firm 4C Insights, today cited by The WSJ, which found that Trump had more support on Facebook and Twitter from the beginning of October through November 7th. Positive sentiment for Trump was 58% to Clinton’s 48%, the firm said.

And finally, Brandwatch’s analysis also found that Trump had more Twitter mentions throughout most of the election cycle, including on Election Day. Between the start of November 8th and November 9th at 1:30am EST, Trump accumulated more than 4.9 million mentions while Clinton has just over 2.7 million. 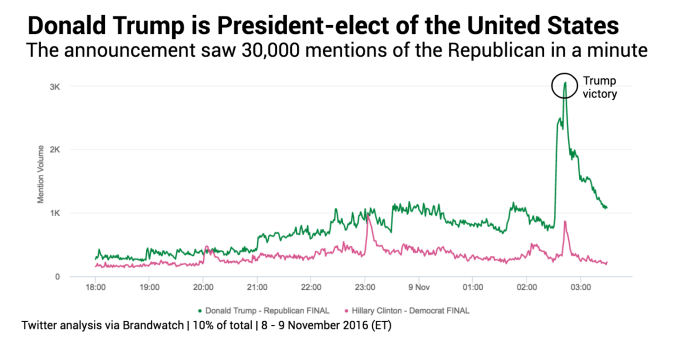 But not all social media analytics firms believed their data could point to a Trump win. A contrarian report from CNET, for example, noted how one firm, Spredfast, believed there were too many conflicting signs on Election Day for them to make a prediction.

Still, even social media may have missed many Trump voters. During this election cycle, there were a number of silent Trump supporters, as well as those who were quietly leaning in his direction, who may have not made their views known on social media.

It appears that at least some of these supporters only took to social media once a Trump win looked possible. After Trump took swing states Florida and Ohio, positive tweeting in support of Trump spiked, Spredfast told CNET.

However, social media’s success likely means it will be given more attention in future elections. But it can’t see it all. That’s why we still need polls – preferably accurate ones next time.