Truth be told, I don’t really use convertible laptops. I’ve used many, but the whole articulating hinge idea never resonated with me. However, it is a cool concept and, if done correctly (strong enough hinges), a nice feature to have, thus complementing the rest of the system. The result is that a student (for example) can with minimal effort turn a work machine into an entertainment center for friends.

HP is no stranger to making convertible laptops: This 13″ Spectre x360 is the third-generation model. But after three tries, it’s only now poised to become one of the best Windows laptops that’s also a compelling convertible. 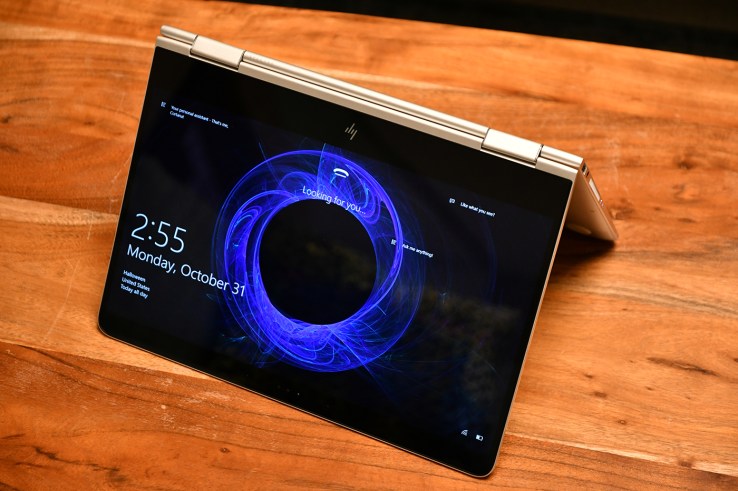 The Spectre x360 is a gymnast, in the sense you can use its screen as desired. If you want to pretend it’s a regular laptop, never push the screen past the 110° mark. However, if you want to be more flexible, you can lay the screen flat or push it a little farther and flip the system for “tent mode.”

Of course, if anarchy is on your mind, take the screen all the way back and you’ll have a roughly three-pound tablet in your hands, with 13.3 inches of real estate. This last configuration is hardly ever used on my part, and, ultimately, one I’m not sure many will make any real use of. This isn’t a Surface Book or Pro because it lacks a pen; of course, third-party accessories could make it closer to the real thing.

All of this hinge action is a testament to the fact that HP designed a system that could achieve almost any use-case scenario — with the exception of detaching the screen from the chassis.

The Spectre x360 feels most useful as a regular laptop, slugging through dozens of Chrome tabs on 80 percent brightness, with Wi-Fi/Bluetooth radios enabled. The keyboard has decent spacing and actuation, with almost no flex on the chassis (a sign of build quality).

HP’s wide touchpad is quite pretty, though I’m inclined to say that it isn’t the best I’ve used and surely not the best HP could have made (why doesn’t anyone use Microsoft’s new Precision drivers?). Tweaking the pointer and touchpad drivers made it a better experience for me, but HP still isn’t at Microsoft or Apple levels of precision and smoothness.

The full-size USB port is my saving grace, so an SD card adapter is easier to come by, so I get photos off any camera with which I’m shooting.

Both the processor and SSD on this particular Spectre x360 are ideal. If you crunch lots of numbers in spreadsheets, or otherwise are programming and editing, there’s little that a Core i7-7500U with a base clock of 2.7GHz can’t get you through.

Similarly, the SSD here uses the newer, faster NVMe standard, so reading and writing everyday files is something done in a few moments, rather than dozens of seconds. Additionally, 16GB of RAM doesn’t hurt, either; to be honest, that is more of a gaming laptop spec, which is even better.

The speakers, by Bang & Olufsen (part of the ongoing partnership between the two companies) are in quad configuration, and not dual (like most laptops of this size), so it sounds noticeably better than the last-generation x360. There is no distortion at higher volumes or echoes that sound like a tin can, but I’d still use speakers or headphones over the built-in solution. 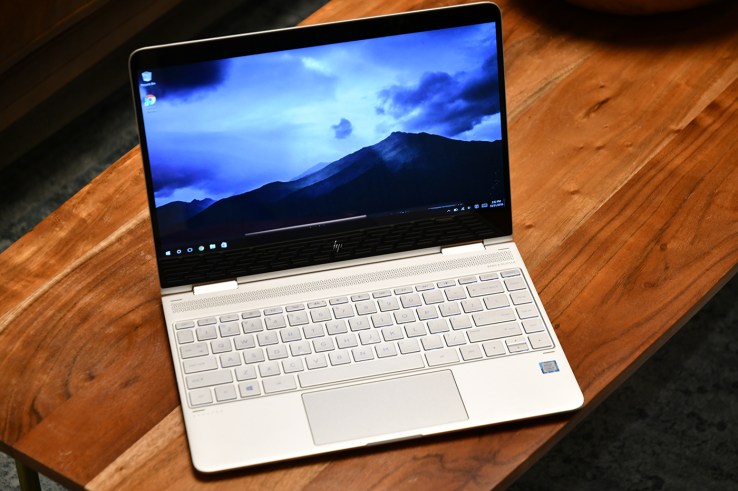 HP threw in some goodies that make the Spectre x360 a little more well-rounded than before: an IR sensor for use with Windows Hello facial recognition, dual microphones for stereo audio recording and the staple 1080p HD webcam for video chats.

Here’s where I save the best for last: Battery life is solid, reaching upwards of 10 hours. This happens consistently — but even if it doesn’t, rapid charging is a thing now. The included USB-C charger gets me from naught to 90 percent charge in 90 minutes — that’s great. 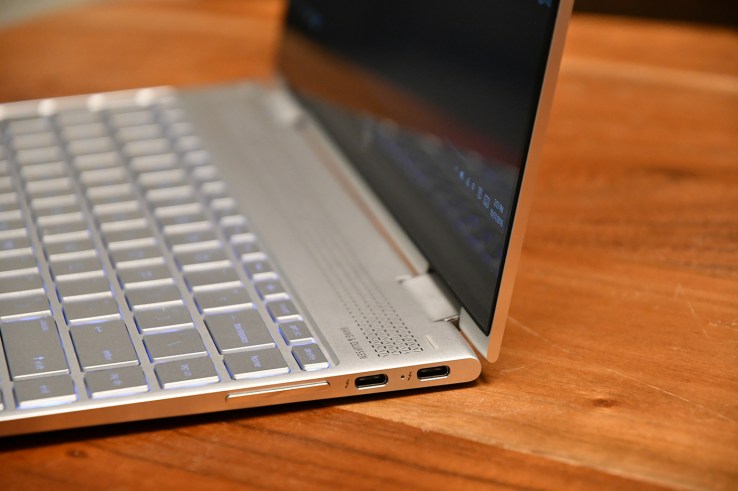 There is no SD card slot. That much is obvious — the new MacBook Pro nixed that, as well. In fact, quite a few leading ultrabooks don’t have the aforementioned port, so the story gets even sadder for photographers and creatives. But, the full-size USB port is my saving grace, so an SD card adapter is easier to come by, so I get photos off any camera with which I’m shooting.

HP gives us a taste of the future (multiple USB-C ports) while still paying respect to the present (USB Type A).

Also, I must mention the fact that on my particular review unit, the Spectre x360’s hinge has been known to make creaking noises. Obviously, that isn’t a good thing, but after a few rapid-fire opening and closings, it seems to have stopped creaking — hopefully permanently.

The last of my main concerns with the new Spectre x360 includes its 1080p screen, which exists in a sea of Retina and competing quad HD displays. Sacrifices had to be made for thinness and battery life, but they’re the ones I would give up for quality and “future-proofing” (resolution and content-wise). 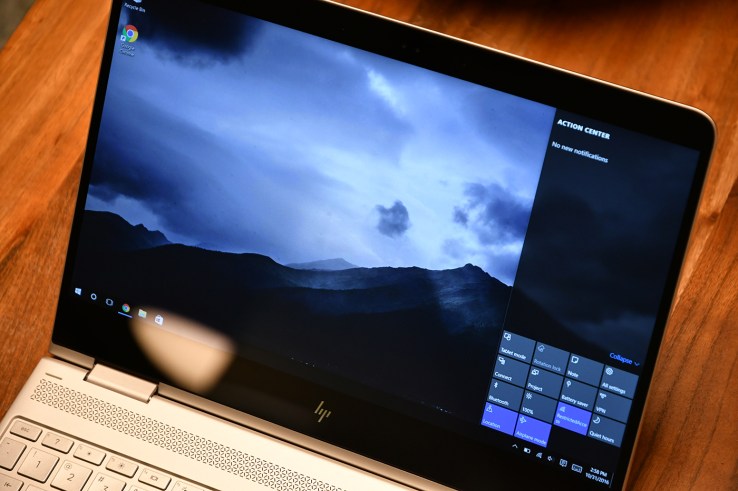 In the end, the HP Spectre x360 is a definite proof that Windows PC manufacturers have not only stepped up their design game but can experiment and have compelling results. I can confidently say that HP (and Lenovo, in some cases) are producing convertibles that are also aesthetically pleasing ultrabooks.

If convertibles aren’t for you, but thin bezels, island-style keyboards and an aluminum chassis are, the Spectre x360 is still for you — there’s no obligation to use the hinge past the 110° angle.

HP gives us a taste of the future (multiple USB-C ports) while still paying respect to the present (USB Type A). An SD card is a loss for photographers, but, then again, it’s not as bad as not having a single regular USB port (I’m looking at you, Apple).