It looks like the last picture show for one of Google’s efforts at expanding into more detailed vertical search pages. Without much notice, the search giant has closed down its standalone movie site where people were able to search for cinemas, films and show times on a particular date and near a specific location, rolling some of the functionality directly into its main search portal. “Google Showtimes”, as the service was called, now brings up a 404 error if you try to visit its main page.

The “about” description, however, linked above, provides the following message:

A spokesperson declined to comment further about the closure and whether it was part of one of Google’s recurring spring cleaning (or autumn cleaning, as the case may be) service closures.

It’s not clear why Google decided to shut the separate portal but there are some signs that Google Showtimes what not much of a blockbuster for the company, and perhaps even ran counter to how Google sees some of its bigger developments in search and media.

Google’s movie portal looks like it first went live in some form in the autumn of 2005, and as you can see from a screenshot from October 2016 below, it never updated much beyond its interface based around Google’s original, very simple, pared-down aesthetics in its original search experience.

This was actually a good thing, it seems, as groups of (now former) users on Google’s product forums, Reddit, and elsewhere who are complaining about the closure note the contrast with competing services from the likes of Fandango and Movietickets — which, may look more snappy but are less useful for finding cinemas and films based on specific locations and times that might not be exactly where you are at that precise moment.

Those users now appear ready to throw their popcorn at Google for retiring Google Showtimes and funneling some of the features into Google.com, which presents basic results like this when I search for a theater or film here in the UK at Google.com: 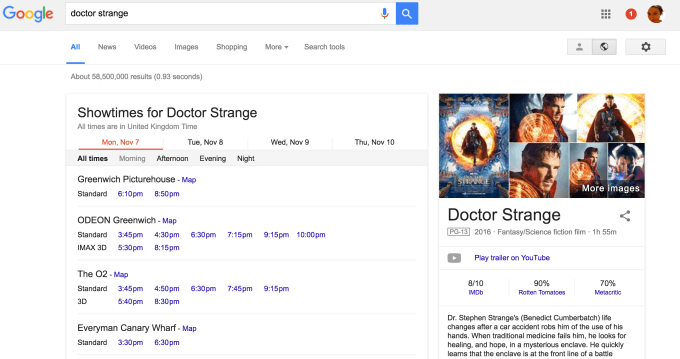 It looks like Google didn’t do much in the way of selling ads against Showtimes, meaning that the traffic that was resulting from it, such as it was, didn’t necessarily convert to revenue for the company.

Google Showtimes somewhat went against bigger trends in the film industry, which is bracing itself for another tough year where cinemas are concerned. Box office ticket sales for 2016 are on track to be the worst in a century, according to Vanity Fair.

Google Showtimes also stood separate from the wider industry trend for streaming and Google’s own ambitions to become a platform for distributing and consuming video, coming as it did a full year before the acquisition of YouTube (and many years before services like Android TV).

Instead, Google Showtimes appeared to germinate more from the company’s strategy to expand into more vertical search categories, providing landing places for people who are going to the web to look for specific information and choosing specific portals to get there, rather than Google’s catch-all Google.com, a trend that has grown with the rise of smartphone use, where people want fewer steps between looking for something and arriving at an answer.

That effort has resulted in the building of an extensive mapping product, Google Maps, but also portals like Google Flights for plane ticket searches and Google Finance for financial news and data. It may be that while Google is still working on new search experiences beyond Google.com, they are more likely to be based around other vertical definitions (like mobile, location, and so on) than Google might have originally conceived.

Indeed, Google Showtimes is not the first vertical portal that Google has shut down. Google’s hotel finder now lives within Maps, rather than as a separate site.