In recent years, a crop of companies have emerged that are using genomic sequencing to detect diseases in order to prevent the negative outcome of those diseases. It’s led to a budding ecosystem of startups that are crunching the data, as well as the cost of that sequencing coming down.

But while we’re at the stage of getting the cost of genomic sequencing down and making it more accessible, the applications are the next big question. The biggest potential step is obviously CRISPR and the potential to edit genes — which Illumina GM for Greater China Ruilin Zhao said would be the “$100 billion question” at TechCrunch Disrupt Beijing. For China, that offers a big opportunity because it’s on its way to becoming one of the largest markets for genomic sequencing and testing, he said.

“At this stage it’s largely still a concept,” Zhao said. “Having said that, the future is there. We’ve seen successful example. We talk partially about it, a major portion of our company’s work is about detection and finding out. Deciphering the mystery of the gene coding and then trying to think what we can do with it. That’s what CRISPR is trying to do. In the long run, we’re gonna be able to modify genes, but that’s always a guessing game what the timeline is.”

Already, there’s a support network blossoming around emerging biotechnology companies — whether that’s through venture capital or otherwise. Illumina, for example, runs an accelerator program that it’s planning to roll out in China soon. That’s led to the emergence of some startups in Silicon Valley like Color Genomics and 23andMe, which have attracted an enormous amount of venture financing. In China, that’s an area that’s also in the works given that it’s on its way to being one of the largest markets in the world for genomic testing, Zhao said. 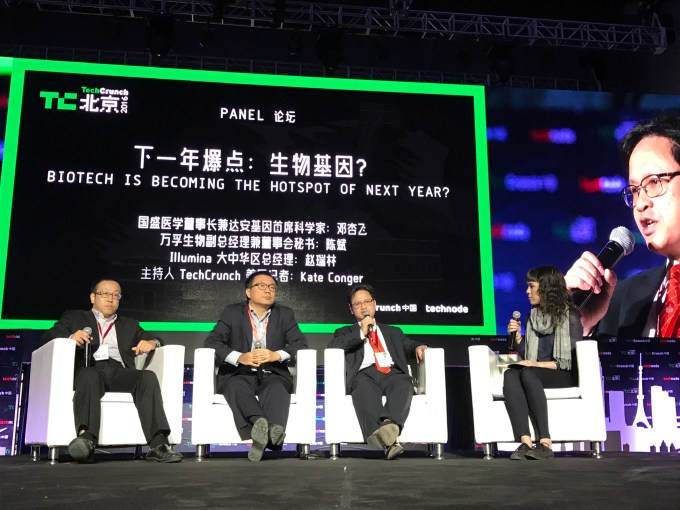 There’s an enormous amount of interest around the globe in gene sequencing and detecting diseases. Even Phil Schiller is on Illumina’s board. And part of the reason is that applying machine learning to get a better analysis of the genome and catch potential problems earlier. But one of the biggest problems that’s always going to hound these companies is ensuring that there’s a high degree of accuracy, which as the technology matures, gets better and better, President & CTO at Ardent BioMed David Deng said.

Recreational genomic testing will always be an area that is going to have some consumer interest, but there’s also point-of-care testing — essentially getting the results of a test in a matter of minutes — that’ll be an important area for understanding and getting ahead of diseases. As the data science behind it becomes more sophisticated, those answers start to come out faster and faster, making it easier to make more calculated decisions, VGM & Board Secretary of Wondfo Bin Chen said.

But with the technology maturing and moving toward the potential of gene editing, there’s always going to be a big question: what happens when we can edit the very basic parts of our lives. And that’s not just a question that’s restricted to Silicon Valley. Or, as Zhao said, “There’ll be a discussion about who we are — are we becoming gods of the whole world?”