FilmStruck, a new streaming service aimed at film geeks developed by Turner Classic Movies, has now launched. Announced earlier this year for a mid-October arrival, the service belatedly debuted with a collection of hundreds of classic, indie, foreign, and cult film, as promised. The company also announced the pricing for its new Netflix-like competitor: a somewhat costly, comparatively speaking, starting at $7 per month.

An expanded version of the service for $10.99 will include the base collection of hundreds of movies as well as the Criterion Channel, which represents the largest collection of Criterion films available for streaming with its 1,200 titles. Those films will be exiting Hulu on November 11, where they have previously been hosted. This collection includes studio classics and contemporary films, along with their special features like filmmaker profiles, masterclasses, and curated series by guests. 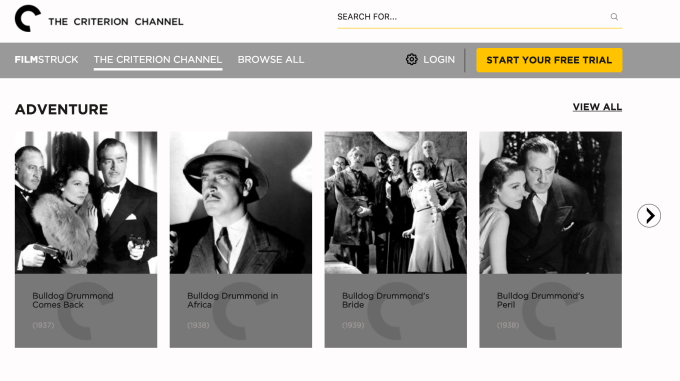 It’s worth noting that FilmStruck’s entry-level pricing only a dollar less than Netflix’s cheapest “Basic” plan. Though reasonable as a standalone fee, when you take into consideration that many people today are already paying for Netflix, HBO NOW, and/or Hulu, and possibly have access to Prime Video through their Amazon Prime annual subscription, FilmStruck could have limited appeal.

Then again, that may be what it’s after. The service is largely designed to cater to those who mainly watch movies – something that many of the streaming services, and especially Netflix, don’t have as much of these days. In fact, a report from this March by AllFlicks found that the number of Netflix movies in its catalog had dropped by 33 percent over the course of two years. Of course, these days Netflix is investing in its own original content, including movies, but not enough to bring those numbers back up.

On FilmStruck, there are plenty of movies to watch, if you prefer a certain sort of genre that doesn’t include today’s hit blockbusters. Instead, you can browse titles like “A Hard Day’s Night,” “Mad Max,” “Metropolis,” “Moulin Rouge,” “My Life as a Dog,” “Paths of Glory,” “The Player,” “Seven Samurai,” “A Room With A View,” “Blood Simple,” “The Unbearable Lightness of Being,” “Stardust Memories,” “Breathless,” and many others.

The service is available now, free for the first 14 days during a trial period. The movies can be streamed across desktop, mobile, Amazon Fire TV, Apple TV (4th gen.) and soon, Chromecast and Roku.