With Alexa and Google Assistant are gunning for control over the general voice-driven experience with technology, that might open doors for some more targeted verticals that are centered around voice.

It’s not an unheard of strategy — building services and tools around specific experiences rather than trying to do it all at once has been an effective approach for many startups in Silicon Valley. Those services can even try to slot into larger platforms like an Alexa or a Google Assistant. At this point it’s essentially a time-honored tradition in Silicon Valley. And in the case of Hello, the makers of a sleep-tracking orb called Sense, that’s what they’re hoping to do with by launching new version of the device that enables voice control.

“As a company we’re trying to get rid of intrusive tech from your life — how do you have more tech like Sense that blends in and disappears,” Proud said. “You should be able to say, ‘play white noise for 30 minutes,’ that’s better than opening up the phone each time. To do it well is to build it yourself.”

Sense is also starting to integrate third-party devices, like the Nest thermostat and Phillips Hue light bulbs, into the overall experience for the new devices. In theory, a user might be able to ask Sense to turn on the lights at a certain time at a certain luminosity. The idea is to, again, use voice to set the environment and all the different nuances of the sleep experience through an app or through your voice.

The launch comes ahead of the holiday season, often a make-or-break time for hardware companies. Poor demand can not only lead to a lot of devices sitting on shelves — as Sense is sold in big box retailers — but also could even lead to an optics issue in the case of a startup that might need financing following a poor season. Sense has made a big push to get in front of as many people as it can, like by selling internationally and beefing up its marketing staff. 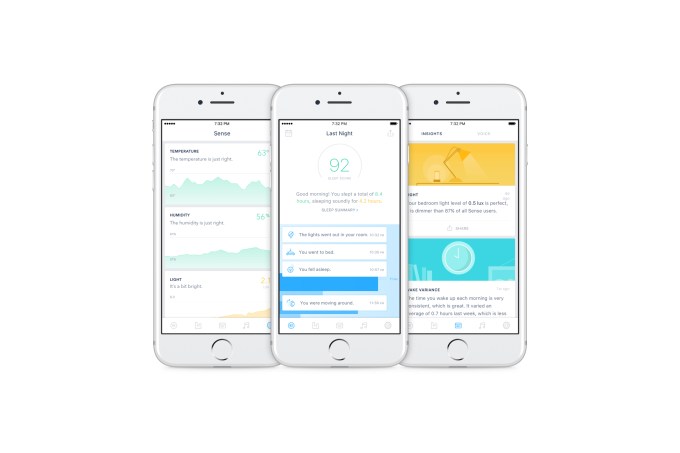 Hello, like any company, used existing technology for the new Sense’s voice recognition, Proud said. But as a custom piece of hardware with custom microphone technology, the company had to largely build the voice detection algorithms and voice interface on its own — an undertaking that, from the start, would have taken an enormous amount of resources and left a product un-shipped for nearly an additional year.

Like other services, Sense remains in a passive listening mode that Proud said is disconnected from the cloud until a user says the words “Ok, Sense.” It’s in a similar vein to Amazon’s Alexa or Google Assistant, in the sense that the company wants to ensure users that it’s not listening to every word they are saying and only reacting to important moments of interaction. The rest of the experience — interacting with an app and sticking a small pill into your pillowcase to track your movements — is still part of the core service.

At the same time, Proud said that while Alexa and Google Assistant want to be blanket tools, Hello wants to start with a more targeted approach. By initially focusing on the sleep experience — and potentially expanding beyond that over time — Sense can carve out a user experience that can be more specialized (and thus more specific) than Alexa or Google Assistant.

Hello, the makers of Sense, have raised around $40 million in financing in addition to starting off as a Kickstarter campaign that raised $2.4 million. The company was valued between $250 million and $300 million in its last financing round, and also has investors like Xiaomi’s Hugo Barra, Facebook’s David Marcus and former Twitter CEO Dick Costolo. As a hardware company, the stakes are of course high with production notoriously being difficult and costly.

Sense has historically been adding additional features through firmware updates (like transforming it into a white noise machine as well as a sensor), but this one is an overhaul of the internal guts. Proud said that beyond measuring the traditional air particulates, the new device monitors carbon dioxide levels and other compounds in the air. Some of this may seem like overkill on face value, but the goal is to get a better profile of the person’s sleeping behaviors in the hope that they will be able to figure out the optimum schedule and environment that will help them get a deeper sleep.

The new device is priced at $149. For now, Hello is still focused on the sleep experience. But that’s not to say that’s the only part of a person’s life upon which the company might set its eyes. Proud said the company focuses on the “big percentage” parts of users’ lives, sleep being the largest. But as a health and fitness company at heart, it’s not hard to imagine where the device might go from here — especially if it doesn’t exist only in the living room.

So, imagine telling a little glowing orb on your kitchen counter that you had grilled chicken for lunch, and having that help fit into your overall health profile. That’s not where the company is right now — and it’s hard to say where things go — but it doesn’t seem too outside the realm of possibility. 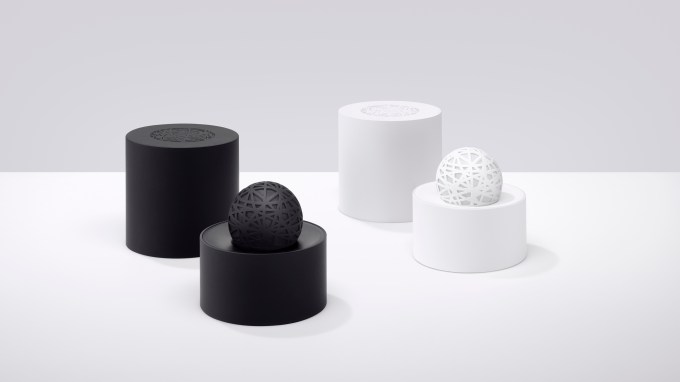 “The focus for us, we don’t think about and owning rooms and spaces and these things,” Proud said. “What we care about are people — how do we help you live a better life. The reason we started with sleep is because we’re not a sleep company, but we believe sleep is the foundation to our lives. Is there a problem we’re trying to solve to help you live a better life, if that’s big enough sure but we think about other products we could build.”