Who’s copying Amazon? Everyone! But especially Walmart. Speaking of which, the retailer giant announced today the launch of its own video streaming service, called Vudu Movies on Us. The service at launch will include thousands of titles, which will be available in HD and can be streamed for free. To generate revenue, Vudu Movies on Us will be ad-supported.

While Amazon’s Prime Video is a perk that comes with an Amazon Prime membership, then offers a variety of commercial-free movies and TV shows, including originals, Vudu Movies on Us will not have new releases. Instead, it will more narrowly focus on distributing free blockbuster titles and other classics, the company says.

For example, at launch the service will include movies like “Mad Max,” “True Grit,” “Abduction,” and “School of Rock.” All will be available in 1080p high definition, and will support Dolby Digital sound when available, says Walmart. 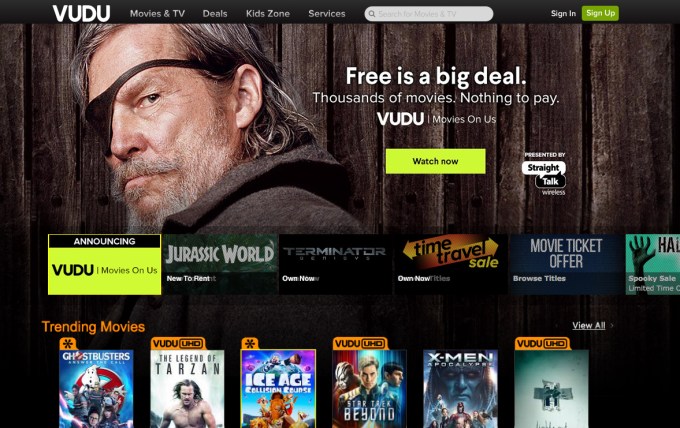 Vudu, of course, has been around for over a decade, allowing customers to rent and buy movies and TV shows through its marketplace. Walmart bought the service back in 2010. But today’s audience is more interested in streaming than owning, in many cases.

With the new venture, Walmart can enter the on-demand streaming market without having to build out its own, exclusive content library – something that would have been a pricey way for Walmart to compete.

Instead, Vudu Movies on Us competes with other ad-supported streaming services, like Yahoo View, which is the new home for Hulu’s free content, as well as Sony’s Crackle.

In addition, citing research from Deloitte, Walmart notes that over 42 percent of U.S. consumers prefer to stream content at home, and most prefer movies and TV from ad-supported services. (Of course, many also prefer Netflix, according to the streaming service’s still growing numbers, announced yesterday.)

The free titles are available now on Vudu, in a new section in the app. To find Movies on Us, click the “New” tab on the desktop or “Spotlight” if on mobile or on a living room device like Roku, Chromecast or consoles.