Today’s Blue Origin flight was a unique one. Upon testing their rocket’s in-flight escape system (a means of bringing passengers to safety if something were to happen during launch), Jeff Bezos’ rocket company ended up with a safely recovered crew capsule and an unexpectedly intact New Shepard rocket.

The company had considerably downplayed the odds of successfully recovering the booster for this particular test. Bezos explained in an email that the rocket was expected to be destroyed because of how extreme the in-flight escape test would be.

“This test will probably destroy the booster. The booster was never designed to survive an in-flight escape.” Jeff Bezos, Founder Blue Origin

Regardless, the primary goal of the flight was to safety return the crew capsule to ground, not recover the New Shepard booster. But, as a testament to the robustness of the New Shepard rocket, it was returned to Earth for a fifth and what will ultimately be the final time.

“If the booster does manage to survive this flight – its fifth – we will in fact reward it for its service with a retirement party and put it in a museum.” Jeff Bezos, Founder of Blue Origin

The purpose of today’s uncrewed test was to go through an extreme failure scenario and analyze the rocket’s performance under such circumstances. The company activated the escape system, which pushed the capsule away to safety, at a very specific point in the launch when the vehicle was experiencing maximum aerodynamic pressure.

This crucial point, referred to as “Max Q,” is often considered to be the most stressing moment during launch, as the rocket is pushing through the speed of sound. For this particular New Shepard flight, Max Q occurred around 16,000 feet.

After a 35-minute flight delay, New Shepard launched from its West Texas launch facility at around 11:35 am ET. About 45 seconds into the launch, a solid rocket motor fired for two seconds pushing the crew capsule away from the booster. 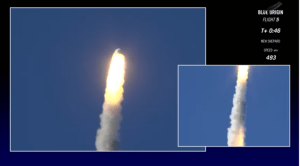 After that, the capsule followed a standard descent profile by first deploying its drogue parachutes, and then deploying its main parachutes and activating a ring of retro thrusters before touching down at a speed of around 3 miles per hour. 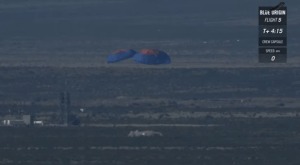 A little over 3 minutes after the crew capsule touched down, the booster successfully stabilized itself and returned to a launch pad. In an impressive series of successful flights, today was the fifth time the company had flown and landed the same New Shepard booster.

This morning’s launch wasn’t the first time Blue Origin had tested their escape system. In October 2012, Blue Origin tested the same crew capsule in an escape system test from a launch pad (without the integrated rocket booster).

The crew capsule used in that 2012 test was the same one that flew today. Testing the system while the crew capsule was integrated on a rocket during flight was the hardest test the New Shepard escape system had been through to date.

Tests like these are leading up to Blue Origin’s first commercial suborbital flights. Bezos has previously stated that they will be ready to take humans into space as early as 2018.

Even though these first crewed missions have yet to be conducted, Bezos and Blue Origin are already looking to the future. Early last month, the company officially announced plans for their first orbital rocket, known as New Glenn.

Just like New Shepard, the New Glenn booster is designed to be recovered and reusable. If flights like today’s are any indicator, Blue Origin is well on their way to making their own reusable orbital vehicles (like the SpaceX Falcon 9) a reality.