From obtaining civil rights for black people to the freedom to marry for LGBTQ people, social justice activists have been paramount in changing our country’s discriminatory ways.

At the White House’s South by South Lawn today, Congressman John Lewis, a civil rights leader and one of the organizers of the March on Washington, kicked off the “How We Make Change” panel with some words of advice.

Lewis went on to say, “Be hopeful. Be optimistic. Never lose that sense of hope,” Lewis said. “Never become bitter, and in the process, be happy and just go for it.” 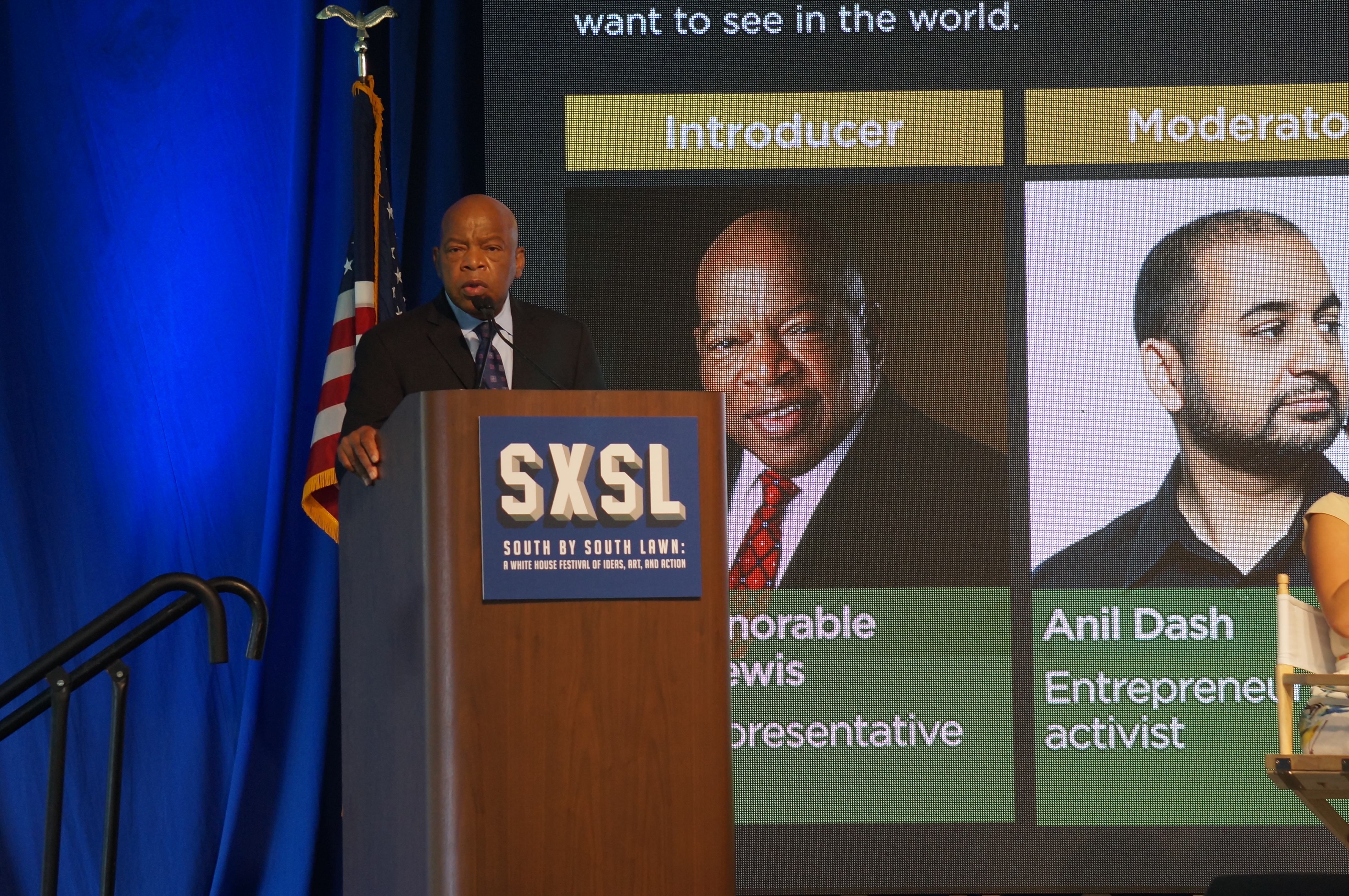 Those words by the historic civil rights advocate were an appropriate kickoff to the panel, bridging the civil rights issues of our past with the ones of our present. Equally fitting were the panelists (Brittany Packnett, VP of National Community Alliances at Teach For America and co-founder of social justice organization Campaign Zero, Carmen Rojas of The Workers Lab and Evan Wolfson, founder and president of Freedom to Marry) and the moderator, Anil Dash, a technologist and advocate for inclusion and equity in the tech industry. Back in July, Dash spoke up about the police killing of Alton Sterling, noting how both Sterling and Eric Garner were killed by police for “bending the law to a far lesser degree” than executives at tech companies like Airbnb and Uber.

For Packnett, two things that really galvanize her are freedom and young people, she said at SXSL. Growing up, Packnett said freedom as a young person was an ideal, and it was clear to her that she didn’t fully have it yet.

“I am fully committed to the idea and the dream that young people — trans young people, gay young people, black young people, Muslim young people — will be able to enjoy the kind of freedom in which they can define themselves for themselves, as Audre Lorde talked about, and show up as their full selves as we go out and change the world,” Packnett said. “To show up in our red chucks at the White House.”

Oppression, by design, robs us of our imagination and makes us believe that the only reality is what exists right around us. Brittany Packnett, Campaign Zero

For Packnett, her tipping point came after a police officer in Ferguson shot and killed Michael Brown, an unarmed 18-year-old young black man. That’s when it became clear to Packnett that in order to achieve freedom for young people, we (black people) were going to need to put our bodies on the line in order to make that happen, Packnett said at SXSL.

“Ultimately it was going to be our bodies that were going to cause a shift,” she said. “Once we put our bodies on the line and actually mounted the pressure for people to pay attention in Ferguson, in Baltimore and in South Carolina and all across the globe, we had to actually make sure we had a plan for the dream.”

That’s where the idea for Campaign Zero came in. Campaign Zero encapsulates what Packnett says she likes to call “radical pragmatism.”

“It’s what motivates me at Teach For America,” Packnett said. “It is a radical idea to believe that one day all children in this nation will have access to an excellent education. Just like it’s radical to believe that one day we can live in a world where the police don’t kill people. Every time we tell people that, people say, ‘well no, somebody’s going to die. That’s not totally possible.’ At Campaign Zero, and my colleague Netta is here, we say zero is really the dream, and now we have to put a plan to that dream. We have to put action to the dream. Radical pragmatism is about dreaming as big as we possibly can, as much as we can, irrespective of what the current reality is and then taking deliberate action toward that.”

But getting to a point where there are zero police killings is an audacious goal, Dash said. Packnett agreed, but added that it’s more about how having the audacity to hope in something that big is resistance in and of itself.

“Oppression, by design, robs us of our imagination and makes us believe that the only reality is what exists right around us,” Packnett said. 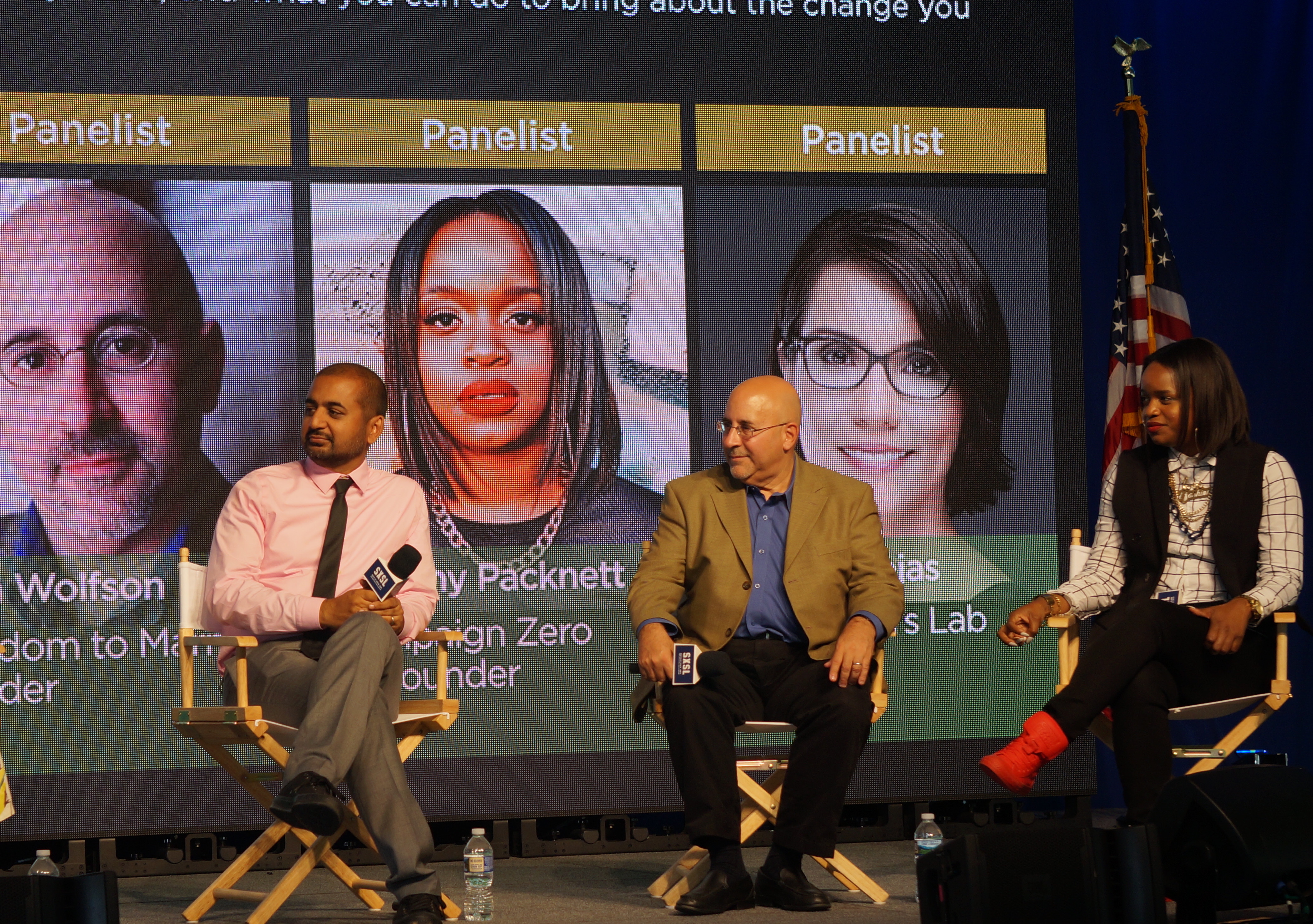 She later said that “imagination and dreaming the biggest you possibly can is so important. Having the audacity to hope in something that big is in and of itself is resistance. That is how oppressed people say we will resist the picture that you’re painting and we will have the audacity to dare and dream bigger than what you’re offering us. That hope in and of itself is resistance and that’s how you get people to dream radically and act purposefully. That’s how you get people to come out of their house and put their bodies on the line.”

After the murders of Alton Sterling and Philando Castile, Campaign Zero launched a widget that would enable people to contact their representatives. Over a thousand people per minute were used the widget for “a certain amount of time” to take action and contact their local representatives, Packnett said.

It is our responsibility as citizens in a Democratic nation “to use every single tool we have at our disposal to confront this system, and to make it work for us,” Packnett said. “We are the people from whom this system derives any of its power.”

Through Campaign Zero, we all have access to a variety of information and tools to take action around issues ranging from police violence to mass incarceration to unemployment. Just last month, Campaign Zero released a police use-of-force policy analysis that looked at the data from 91 of the 100 largest police departments throughout the country. The team found that police departments with more restrictive use-of-force guidelines have the fewest officer-involved shootings per capita. While Campaign Zero does do a lot of work around police violence, its mission is much bigger than that, Packnett said.

“What we are incredibly clear about is police violence is a branch on a larger tree that is rooted in systemic oppression and racism,” Packnett said. “And coming out of that tree is inequitable housing, issues of employment, mass incarceration, healthcare, inequitable education. So the radical dream is not just to break off the branch of police violence but to uproot the entire tree.”

You can check out the full panel discussion below.