Alexa is getting better, the Echo is getting smaller and Amazon will stop at nothing to bring its smart assistant into your home, even if that means issuing a second generation of its Dot hardware a mere months after the original, at virtually half the price.

After all, Amazon knows when it’s got a winner on its hands, and, as Google and (likely) Apple rush to bring their first offering to market, the online retail monolith is already on the second generation of its third device. And this time it’s shooting for ubiquity.

Released in 2015, the first Echo was welcomed by many as something of a curiosity. It was finicky, it was kind of pricey and, more to the point, really, most of us didn’t know why we should want a speaker that could also tell us the weather. A year and a half after those earliest reviews, the public’s heart has warmed to Amazon’s offering, thanks in no small part to the company’s continuing efforts to improve its voice assistant’s artificial intelligence.

With a $50 price point and a circumference roughly the size of a baseball, this latest Echo is pretty hard to ignore. In fact, Amazon’s so confident in its new device that it’s started selling the things like donuts, in packs of six and a dozen, sure that people will want one for every room in their house. Give it a year or two, and the company will probably start shipping the things free with boxes of Tide. In the meantime, however, the draw on this latest device is, indeed, pretty strong. 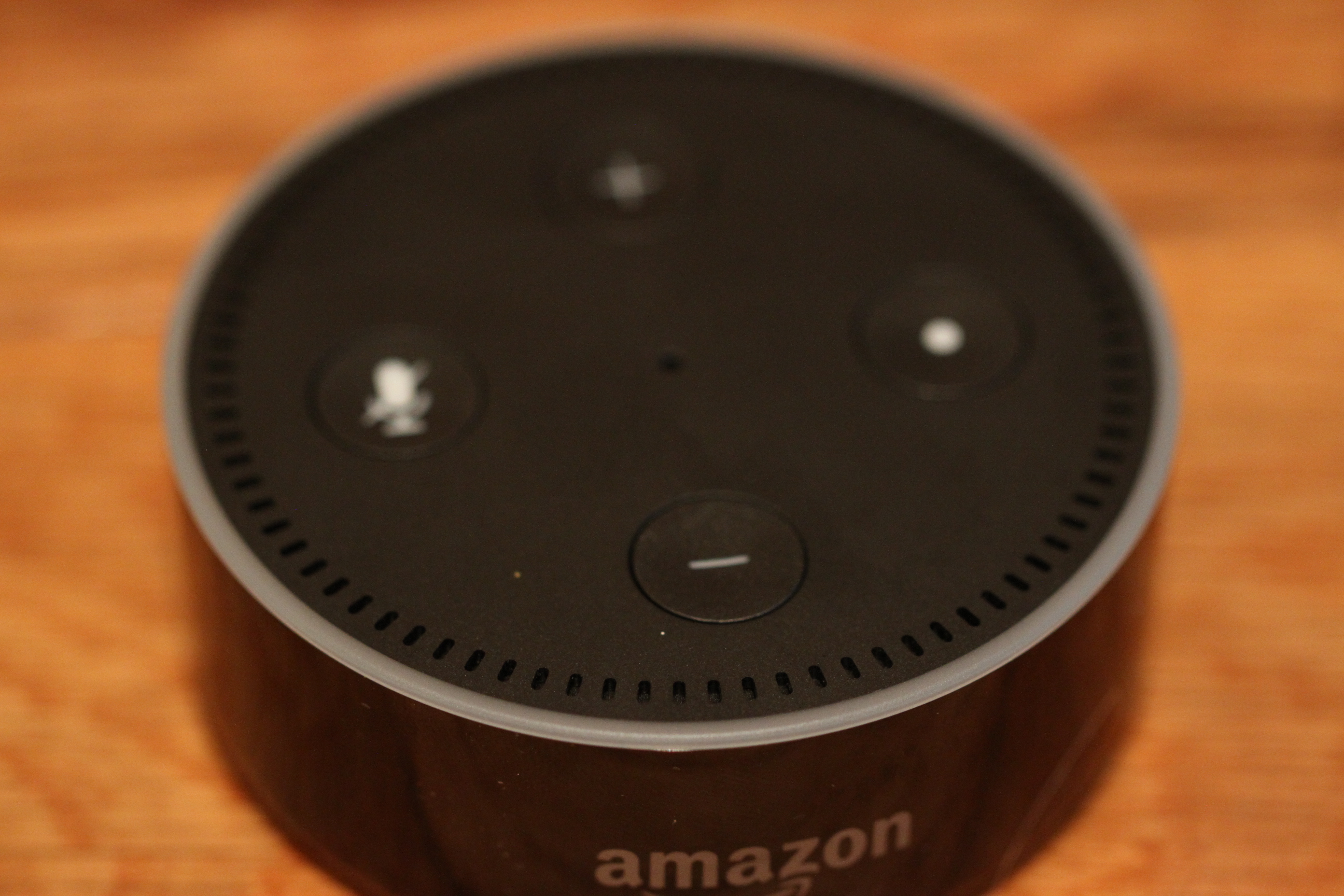 The Amazon Echo is not sexy. That’s not the point. The line is utilitarian, designed to blend in with its surroundings, an ethereal presence that’s far more about software than hardware, serving as a portal into Alexa’s vast and far-reaching brain. That said, the new Dot is downright adorable. It’s small, it’s black, it’s round — quite frankly, it looks like a hockey puck with an Amazon logo on the side.

Really, though, the biggest upside of the Dot’s tiny size is how easily the little assistant can be stashed away, behind a house plant or books on a shelf — so long, of course, as you’re able to thread a cord back there. It really helps lend itself to the notion that Alexa is now an integrated part of the home, rather than the feature set of some new piece of hardware.

The design is fairly similar to the last Dot, albeit slightly stunted. The number of buttons up top have been effectively doubled, adding volume up and down along with power and mute. Around that is an LED that lights up when you engage selection. The speaker grilles, meanwhile, are barely visible, lined up along the bottom of the device. 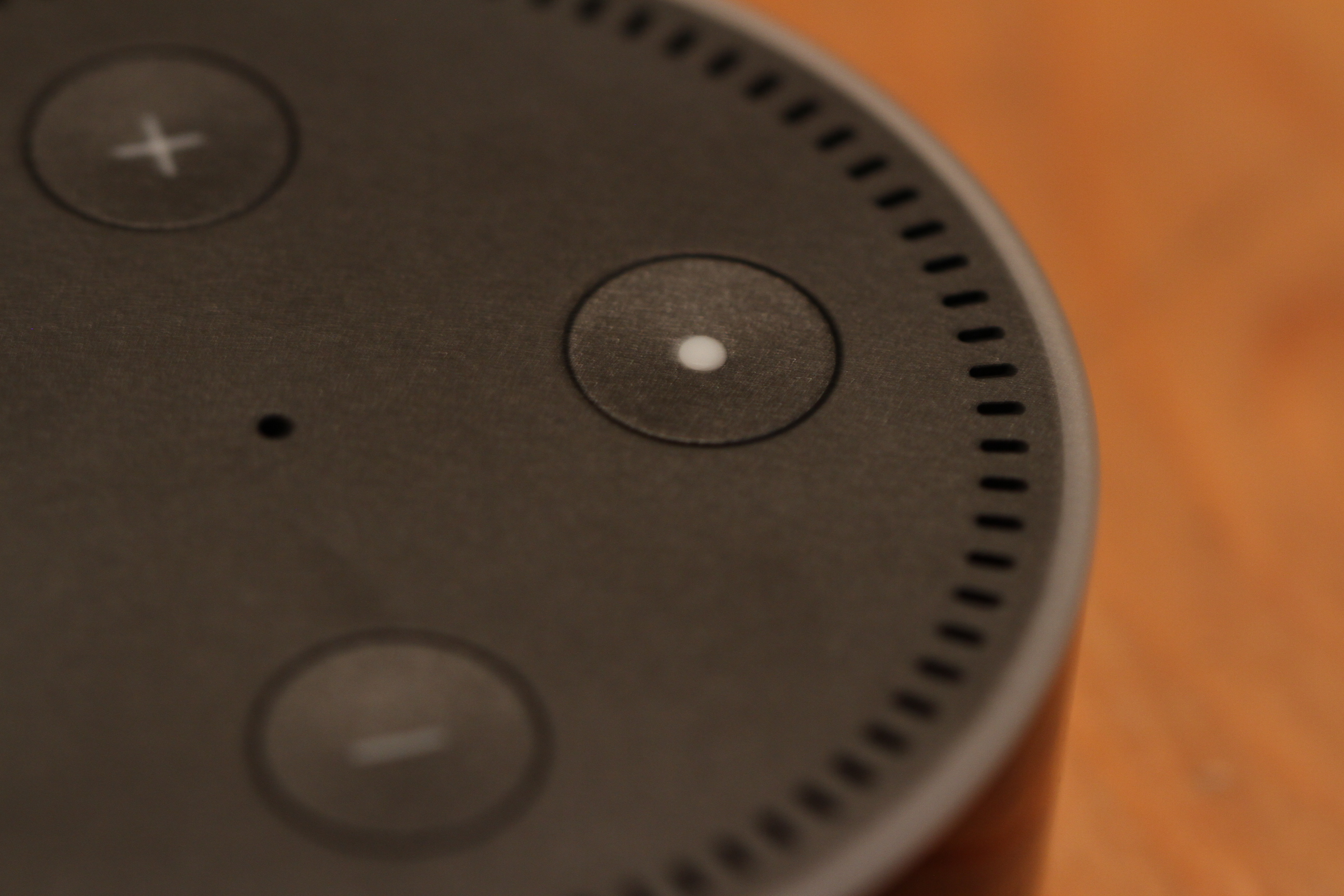 On the back is a microUSB port (it will probably be a while before the $50 goes C) for power and an audio jack, should you want to connect the device to a speaker. And honestly, if you’re planning to listen to music for any extended period, I’d recommend it. The Dot’s built-in speaker isn’t all that much better from what you’ll get on, say, a tablet — and really, the dropping of the large speaker was the primary distinction between the standard Echo and the Dot in the first place.

The new Dot isn’t a premium piece of hardware by any measure, but that’s not really the point — and honestly, with few exceptions, that’s not really the point with any of Amazon’s hardware. For the company, the Echo, like so many of their devices, is simply a portal into the retailer’s ever-growing selection of Prime and premium content. It’s a big part of how the company manages to keep prices so low. 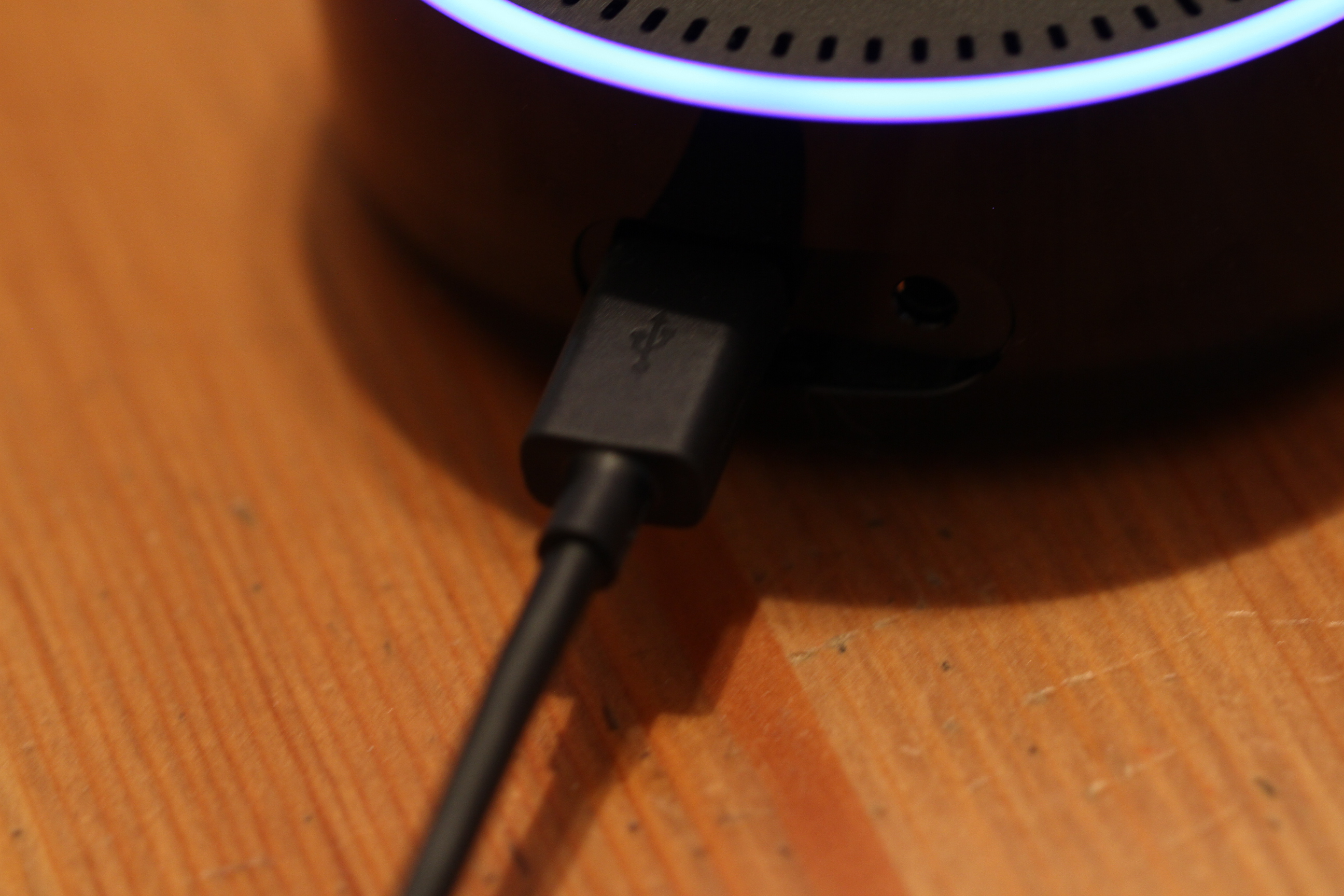 Setting up the Dot is dead simple. Of course, given the fact that the Dot doesn’t have a screen, the app ends up doing a lot of the heavy lifting. To get the Dot online, you’ll have to connect it to your handset via Wi-Fi. Once you’ve done all that, however, you’re pretty much good to go, even if the Dot should get unplugged at some point.

The app actually comes in hand on a number of fronts, keeping track of your questions (like a search history) and offering up a way to interact with them beyond the Dot’s simple Q&A interface. The app also helps you connect to smart-home devices, set reoccurring alarms and fiddle with settings, and, naturally, offers access to a wealth of Amazon content — because, let’s be honest, that’s really the whole point of the company’s big Alexa play.

For better or worse, until the company comes up with another method for interacting with the Echo, a tethered device will continue to be necessary for anything beyond simple interactions. As much as Alexa is advancing as an AI, there’s only so much that can currently be done with voice recognition on a piece of hardware like this. 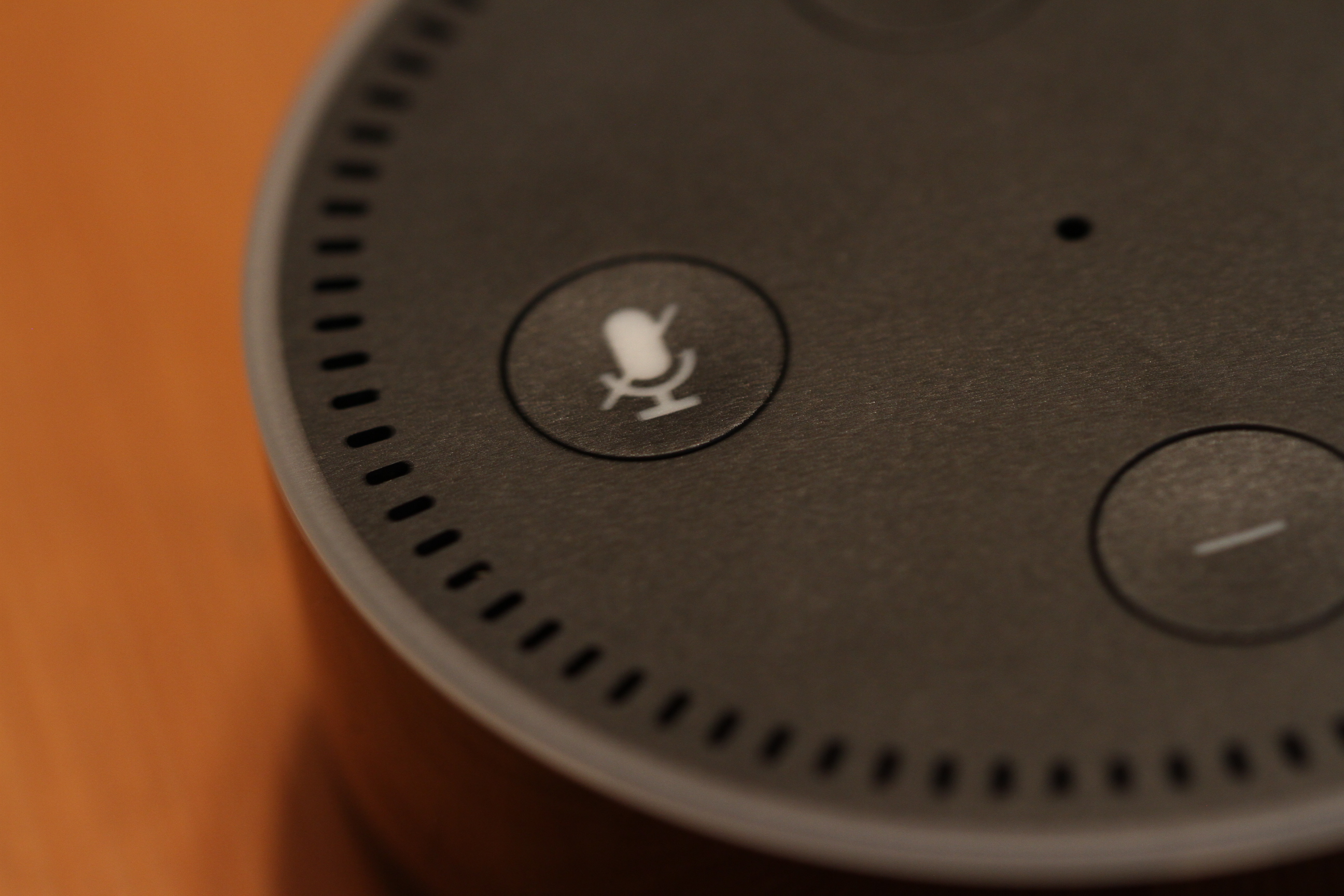 The Echo’s voice recognition was a bit spotty in the first generation, causing some real frustration among early adopters — after all, listening is the one thing the device is really supposed to excel at. This latest version of the Dot brings a number of key improvements to the table, including a new voice processor, new mics and Echo Spatial Perception, designed to recognize to which device a user is speaking — a useful feature as the company tries to compel users to become multi-Echo households.

I have to say, I’m pretty impressed. The Dot perks up almost immediately when it hears its name. I could whisper it close by or say it across the room, and the device’s ring lights up regardless. It’s also gotten quite good at detecting commands. In fact, there were only a few instances in which it had some trouble, and those were usually over band names, a command that’s a lot more difficult than, say, asking about the weather, for myriad reasons. I had to request The Replacements several times before I got what I wanted. Decidedly more idiosyncratic names like Thelonious Monk, on the other hand, usually went off the first time without a hitch. 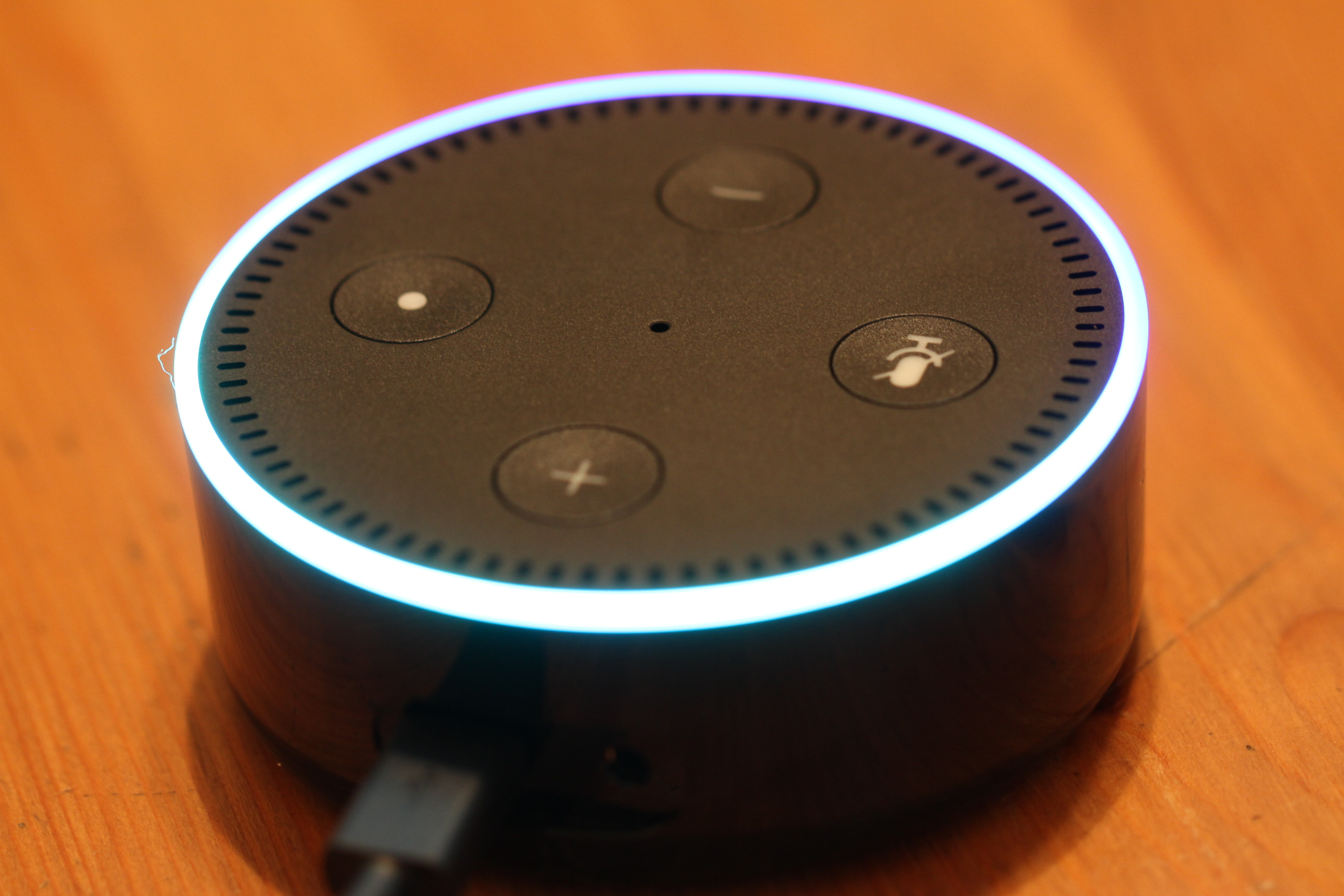 Alexa’s skill set continues to grow with each passing day. Some bits still leave a little to be desired. The assistant’s sense of humor is a bit hit or miss.

“Why was the patriot pig wearing tap shoes? Because it was in the pen dance day.”

“Why don’t oysters share their pearls? Because they’re shellfish.” 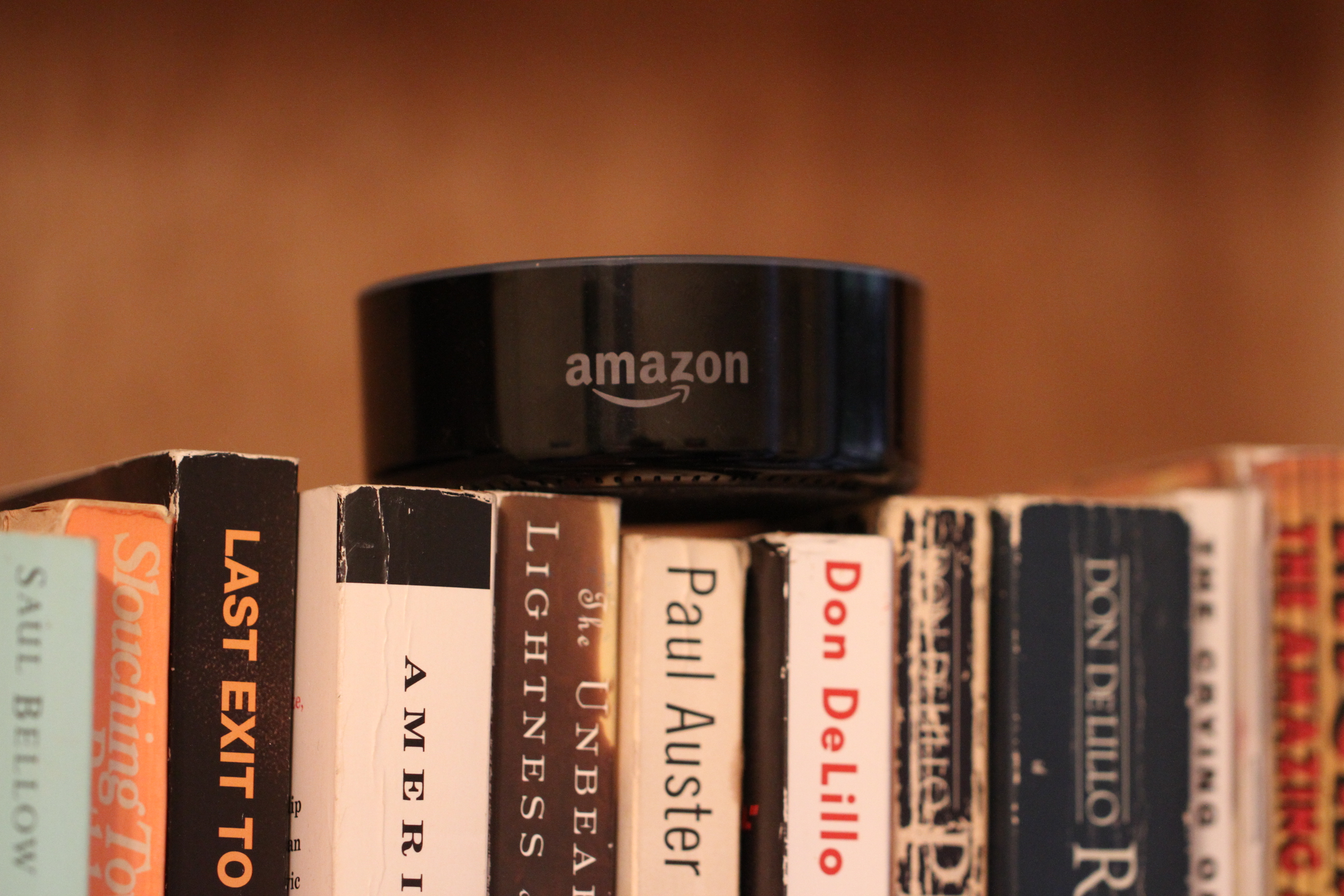 Alexa’s allure gets harder to resist as the days go by. I didn’t exactly rush out to pick up the first Echo when it hit, but between a rapidly expanding skill set (1,000 as of June), ever-improving hardware and a ridiculously cheap price point, there are fewer and fewer reasons not to give the Echo (or 12) a spin.