Expectations are ridiculously high as Westworld rides onto HBO tonight. The first season cost a reported $100 million to make, and it’s being pitched in some quarters as the new Game of Thrones.

When you’ve got any TV show with that much hype, some disappointment seems inevitable, but judging from the first two episodes, Westworld is even better than anticipated.

Based on a 1973 film of the same name (written and directed by Jurassic Park author Michael Crichton), Westworld takes place at a Western theme park populated by lifelike robotic “hosts” who interact with “newcomers” — humans guests who’ve paid a hefty price tag for their visit. The activities of the newcomers (freed from the constraints of everyday society and morality) are disturbing enough, but it quickly becomes clear that Westworld’s owners have their own hidden agenda, as does a mysterious guest known only as the Gunslinger (played by Ed Harris).

This new iteration of Westworld was created by husband-and-wife writing team Jonathan Nolan and Lisa Joy. Nolan is best known as co-writer of some of his brother Christopher’s films, including The Dark Knight, and also as creator of the science fiction surveillance drama Person of Interest. He’s obviously a formidable screenwriter, but he’s also one with a weakness for painfully on-the-nose dialogue. (To be fair, I’m not sure whether to blame him or his brother for Interstellar‘s long, awkward speeches about the power of love).

Westworld isn’t entirely immune to that tendency — Jeffrey Wright and Anthony Hopkins, who play the park’s key technical minds, both get to deliver expository monologues about weighty topics like the course of human evolution. But the actors are talented enough to pull it off, and perhaps because of the show’s more mysterious structure (or the contribution of Joy, an experienced TV writer herself), the dialogue feels nimbler and trickier than in Nolan’s past work. 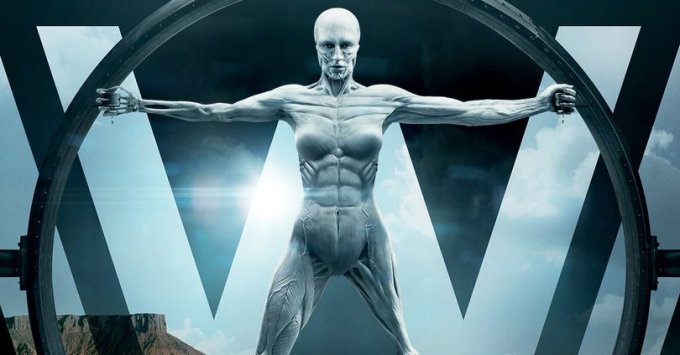 Which brings me to another one of the show’s executive producers — J.J. Abrams, who’s famous for loving mysteries. Before bringing Star Wars back to movie screens, he co-created Lost and gave a much-discussed TED talk on the pleasures of the “mystery box.”  Anyone disappointed by the ending of Lost (or of Abrams’ second Star Trek film, Into Darkness) might be wary of another show with unanswered questions at its center.

But even more than Lost, Westworld seems comfortable with mysteries. The first episode, in particular, is structured like a Philip K. Dick novel, constantly destabilizing viewers and forcing them to question what they’ve been watching. So while I hope there’s some sort of plan for the endgame, I’m already enjoying the almost delirious unfolding of the mystery, regardless of the solution.

Westworld also premieres at a time when morally ambiguous robots and artificial intelligences keep popping up on-screen, most notably with last year’s release of Ex Machina. That film’s writer and director, Alex Garland, speculated that this recent spate of movies may have less to do the current state of AI research and more with our general anxiety around technology — namely, all the information that we’re sharing with online services and the businesses behind them.

Similarly, Joy told us that Westworld is “a chance to tell a frontier story on two levels.” On both the Western frontier and the scientific one, the rules of morality and society might seem a little less certain, which is exactly what Westworld is interested in.

Even with those aforementioned monologues, the show doesn’t go into much detail about the technology powering its robotic hosts. It’s more interested in the philosophical and ethical questions that the hosts’ existence raises.

On one level, the deck might seem to be pretty stacked in any “Are they human?” debate — the empathetic performances by the actors, including Evan Rachel Wood and Thandie Newton, will make it difficult for anyone to be as blasé Westworld’s guests and employees about the brutal things that are often done to the park’s hosts.

However, there’s still plenty of room to explore the exact nature and degree of their consciousness — not to mention what that consciousness will mean for their makers. And there are other, promising questions around constructed realities and the extent to which virtual worlds can push us to reveal our true selves.

The trickiest thing that Westworld‘s first episodes pull off is making us question the distinction between host and guest. Naturally, this makes for exciting, suspenseful viewing, but I suspect it’s also the key to the show’s moral design — helping us see ourselves as not merely the victims or the victimizers, the watchers or the watched, but both. I hope that distinction will only get messier as the show goes on.