Facebook’s chat app wants to help you and your friends decide where to go for dinner or what movie to see, then use machine learning to remind you to pay them back. Today Messenger users on iOS and Android in the US get two new features which could roll out to other countries if they test well.

Facebook tells me “We look at this chat assist function with polls and payments as just another example of offering help to make Messenger users lives easier – like offering a ride with Uber, for example.”

Polls lets you write a question and some possible answers, send them to everyone in a group chat, and then see what’s most popular so you can make plans together. 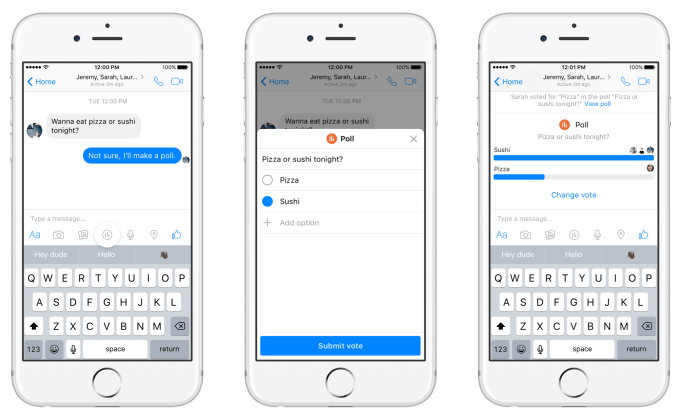 It’s essentially Facebook’s original Polls feature from 2007, which was later scrapped. It’s also reminiscent of the Facebook Questions feature, which launched in 2010 as a Quora-like Q&A option for News Feed sharing, but then aligned with my recommendation to pivot towards lightweight polling in 2011. Facebook scaled the feature back to only appear in Events and Groups. Now it’s coming to chat, accessible from the message options bar above the composer, or inside the More drawer.

Facebook writes that it could help “get groups of people to make decisions and plans [such as] which day to meet up for coffee, where to go on the next family vacation, and much more.” Other apps like Twitter, Google+, and Tinder’s new Stacks iMessage app also offer polling features. But by building it into a 1 billion user chat app where people already organize get-togethers and ask opinions of friends, Messenger Polls could fit naturally in our lives. 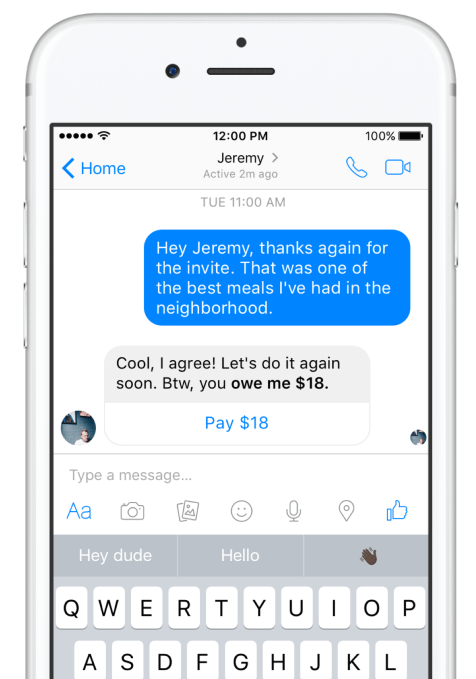 Messenger’s new “chat assist” feature for payments uses machine learning to scan the text you and your friends write, looking for indicators that someone should be sent money. Phrases like “IOU”, or possibly “You owe me $10” or “Send me $18 for dinner” will trigger Messenger to insert a payment button like “Pay $18” below the message.

Friends can then decide whether to click and quickly send money from a debit card number you enter or have previously connected to Messenger.

Facebook first launched friend-to-friend payments in March 2015, and just opened up payments to chatbots. But now you won’t have to beg and nag people as directly to settle their debts. Facebook’s AI will swoop in. Facebook already has some know-how here since the head of Messenger David Marcus and its VP of Product Stan Chudnovsky both came from PayPal.

Making payments a seamless part of the conversation experience could lure people away from siloed apps like Venmo, PayPal, and Square Cash which solely handle payments and not everyone has. Combining Messenger’s ubiquity with a simple payments feature could keep people running all their communication, words or dollars, through Facebook’s chat app.