A big annoyance of city living is checking a site like Nextbus for your bus or rail’s arrival time, and then getting there only to find that you’ve missed it by a split second or the doors close as soon as you get there. Now, there’s actually an app that will yell at you to walk faster if you’re about to miss that bus.

With a big update today, Transit — an app that cleanly shows all the upcoming arrival times of public transportation in your area — is hoping to keep your daily commute on track with a new tool called Go. The app is getting a redesigned look in order to keep up with the ever-changing aesthetic desires of picky smartphone owners.

The app monitors your walking speed, telling you whether you’re going to get to your stop in time. It then will change your connections around if there are detours or delays in order to get to your destination on time. It’ll even wake you up before you get to your final stop, if you’re on a long commute and decide to use the train ride to catch a quick nap before work. 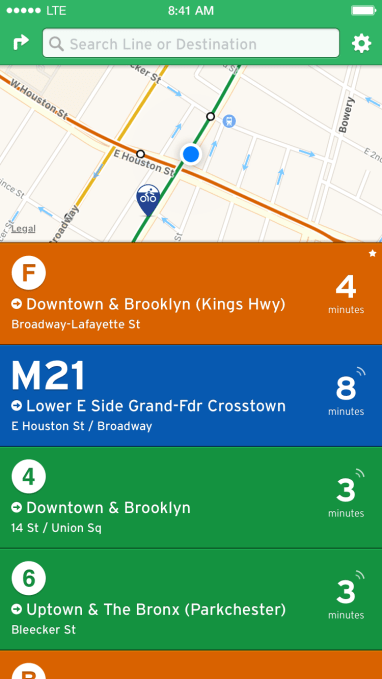 “When we first launched our app there wasn’t even a journey planner, this was back in 2012, because for us it was nailing that [commuter] experience,” Transit COO Jake Sion said. “I’m standing in a bus stop, leaning into traffic to see when my ride is coming, the only info I care about is when the bus arrives. With transit, there is so much info you provide the user and our goal is to make sure we don’t forget what it is most people want.”

The company said it has raised $2.4 million from Accel Partners, Accomplice, Real Ventures and BDC. Before raising this financing, Transit had only raised a small amount of seed funding for its operations based in Montreal. The app is available in around 125 cities in more than 9 countries.

The argument against using Google Maps, Sion says, is that you’re required to put in information for your entire route before you even have access to the next arrival times for buses. Google Maps is an experience largely centered around getting from point A to point B, while Transit is designed to be a quick lightweight commuter experience — you glance at your phone to see where it is, and then you move on.

For the more curious Bay Area transit nuts, some of Transit’s data is actually pulled from Nextbus — the typical go-to tool for figuring out when your next bus is arriving. Sion says that, in addition to Nextbus, Transit works to collect information from a number of municipal sources into getting the most accurate arrival time. Earlier this month, the Massachusetts Bay Transportation Authority chose to endorse Transit as effectively the official app for keeping track of transportation in the Boston area.

But, in short, the data simply isn’t that reliable sometimes. And it can prove to be one of the most costly experiences of taking public transportation, such as being in a rush and being forced to call an Uber or Lyft to get to your destination on time. If Transit can help mitigate that risk, not only would it make for a generally better user experience, it could help make the municipal transit systems in cities overall more efficient and attractive to riders. And that means it could get additional revenue coming in and more opportunity to continue improving.

Going forward, there are a couple of things that Transit would like to do — number one, making sure it’s more accurate. If you’re in San Francisco you’ve probably experienced the frustration of arriving at a Muni stop only to find an asterisk next to an arrival time, basically telling you to stay put and, hey, maybe sometime in the near future it’ll get there (or call an Uber). Transit wants to do a better job of keeping track of user interactions in the app in order to more accurately predict bus and rail arrival times.

The problem already requires a lot of technical expertise, as the data coming in from all these different transit authorities is coming in through different channels and in different forms. That makes it a huge unstructured data problem, and cleaning all that up and compressing it is probably Transit’s first big challenge. A large part of the financing the company is raising is to ensure that it can continue to be the fastest and most accurate way to get that information by hiring additional engineers.

“It’s about bringing that entire urban transportation experience into one place,” Sion said. “What we realized is at the core of how people travel through cities it’s still public transit, it’s about how we improve that experience the most.”