Airbnb is facing a further squeeze on its activities in Barcelona, the Catalonian capital that’s hugely popular with tourists — ramping up tension with local communities dealing with inflating rents and rowdy behavior by visitors facilitated by the rapid rise of sharing-economy platforms.

The city has been trying to crack down on illegal tourist rentals for some time, with the incoming mayor Ada Colau putting a temporary cap on the number of new registrations for rentals last year — a moratorium that was extended this summer. It is not currently possible to legally get a license for a new holiday rental in Barcelona.

But the council is now stepping up enforcement activity, sending letters to residents asking them to report a property if they suspect it is being illegally rented to tourists.

The municipal mailshot, which has begun with residents of barrios Eixample, Gracia and Sants-Montjuïc but will extend to the whole city by next month, follows an announcement last month by the council that it would be stepping up its crackdown on illegal home rentals in the city.

Earlier in the summer the city government also elected to raise ten-fold the maximum possible fine for apartments rented to tourists that are not on the Catalan Tourism Register (RTC), from €60,000 to €600,000. It’s using a regional tourism law to try to control home-sharing activity in the city.

At the end of last year the council fined Airbnb and another home-sharing platform, Expedia-owned HomeAway, €60,000 each for advertising homes not registered with the RTC, and for not responding to requests to provide details on homes advertised without RTC numbers.

Earlier this month a study commissioned by the council suggested that almost 40 percent of the supply of tourist apartments in Barcelona is illegal. It also noted sharp rental rises (of 33 percent) in the city in the last three years — the largest rent inflation in Spain — which it blamed on vacation tourists restricting the supply of accommodations.

“Barcelona City Council works to ensure that tourism activities are compatible with a sustainable urban model,” the council writes in the letter it is sending to residents, adding that it wants to be a city “open to tourism, but with clear rules of behavior.”

It goes on to say it will be stepping up its activities to combat illegal tourist rentals, and asks residents to help it identify illegal rentals by reporting any suspect properties — either by phoning a freedom telephone number or using a web form (available in Catalan, Spanish, English, French and German).

The website also allows residents to check whether an address is legally rented for tourism purposes or not.

It’s a similar move to Berlin’s city council, which encourages residents to file (anonymous) reports online if they suspect neighbors of operating illegal rents — although Berlin has taken an even tougher stance against the likes of Airbnb. A 2014 housing law change in the city, which came into force this May, bans operating short-term tourist rentals of entire apartments without a permit — allowing Berlin’s government to shut off all new activity on the home-sharing platform. (Although the renting of private rooms in apartments is still allowed without a license).

A quick search for a weekend rental for this month on Airbnb yields more than 300 results for Barcelona (and for Paris), but far fewer for Berlin, with Airbnb noting that “only 11 per cent of listing remain for those dates” for Berlin. So while the latter’s crackdown appears to be having a major impact on Airbnb’s inventory, Barcelona’s efforts to reduce illegal tourist rentals that have flourished on platforms such as Airbnb appears to have been fairly ineffective thus far. 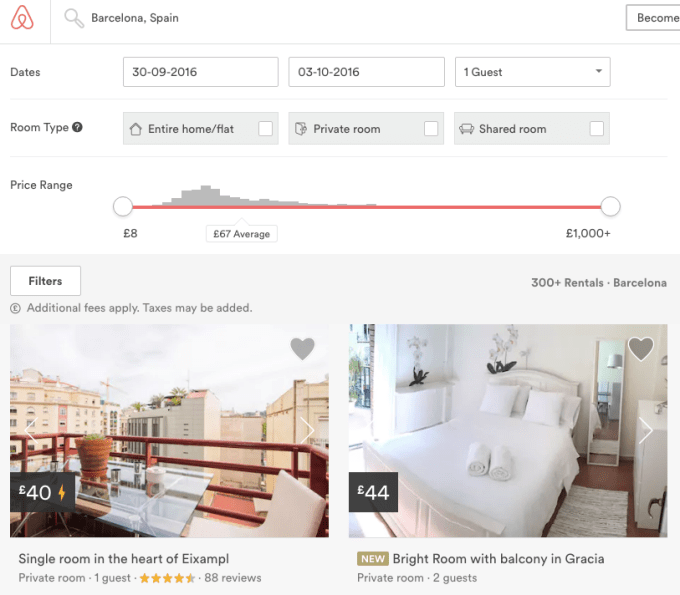 Paris’ city council has also released a map of legal tourist rentals in the city in an effort to combat illegal activity.

Last month, Barcelona’s town hall ordered 256 apartments to be removed from home-sharing platforms such as Airbnb, according to Reuters, and said it was investigating more than 400 other potential offenders.

It remains to be seen whether a mailshot to all residents asking them to inform on neighbors illegally using the platform will cause a substantial number of hosts to think twice. (Or else get more creative about how they use the platform — such as by offering 30-day contracts and cancelling after a few days once a tourist leaves).

In its recent study, the city council estimated that Barcelona has 15,881 tourist apartments, 9,606 of which are licensed — meaning 6,275 are illegal.

In a press release today, the council provided an update on its activities, saying it issued removal orders against 615 illegal flats during July and August — meaning a total of 1,290 cases have been opened following the announcement that it would be stepping up inspections this summer.

It added that a total of 960 complaints about illegal rentals have been received since it opened up the web complaint form two months ago, although it said the total number of complaints and suggestions is higher still, at 1,123.

According to municipal data, the number of people using Airbnb in Barcelona has tripled to 900,000 in the three years prior to 2015.

Responding to the city council’s latest action, Airbnb in a statement accused the council of having a contradictory policy toward tourism, and called for “clear rules” to define “bad actors.”

Airbnb is part of the solution in Barcelona and it is disappointing to see City Hall intimidate locals with archaic rules that threaten an economic lifeline for thousands. There is a contradiction at the heart of tourism policies in Barcelona, which favour commercial operators and apartments turned over solely for tourism in tourist hotspots. Home sharing puts money in the pockets of locals, makes efficient use of space and spreads guests and benefits to middle class families and their communities. Barcelona needs clear rules that distinguish between home sharing and bad actors, like other major cities around the world.

For its part, Airbnb claims it has around 21,000 active listings in Barcelona, with the typical host in the city earning €5,100 per year, and the majority (73 percent of hosts) listing just one property — although that leaves close to one-third of Airbnb hosts in the city renting multiple properties, suggesting plenty of residents are using the platform to act as professional landlords, rather than sharing their actual home.

In its press release today, Barcelona city council warned that platforms that continue to advertise tourist rentals without RTC will be asked to collaborate with the administration and withdraw the ads. If they do not, they face being slapped with the new higher fine of up to €600,000.

In addition, tourist rentals that do not respond promptly to resident complaints relating to activities at their property also face disciplinary procedures under the crackdown, including fines of up to €1,000. The council has set up a dedicated call center to field such complaints.

The city council confirmed to TechCrunch it is not currently regulating tourist rentals where a person rents a room or rooms in the address where they also live. Its actions are being targeted against entire apartment rentals. However a spokesman noted that it is currently drafting new tourism regulations which will include room rentals, and allow for each municipality to regulate this type of rental in future.