Amazon this morning rolled out another perk for subscribers to its Amazon Prime membership program: free access to Audible’s short-form digital programming called Audible Channels, as well as a selection of free audiobooks. Amazon says members will have access to a rotating selection of over 50 audiobooks from Audible’s catalog.

That’s similar to how the Kindle Lending Library works – members don’t get to check out just any book, but instead can pick and choose from a selection of those available for lending.

The audiobook selection will include a mix of best sellers, family favorites, and celebrity-narrated classics, the company says.

Audible Channels, meanwhile, is a newer service Amazon-owned Audible launched in July, which aims to tap into consumers’ growing interest in podcasts and other audio programming.

However, Channels isn’t exactly a podcast service, but rather features a mix of bite-sized, ad-free content from original content producers, as well as spoken-word recordings from publishers like the The Wall Street Journal, The New York Times, Harvard Business Review, Foreign Affairs, Charlie Rose, McSweeney’s, The Onion, and other periodicals. 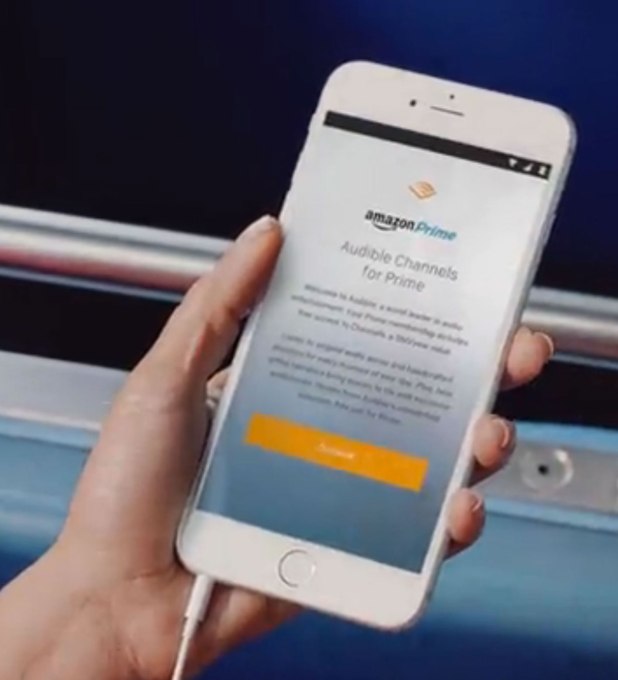 The service’s original programming encompasses a variety of subjects, ranging from comedy to investigative journalism to talk shows to educational programming and more.

Amazon this morning also detailed some of the forthcoming original shows that will arrive on Channels.

These include “The Butterfly Effect,” hosted by Jon Ronson, which explores the question, “what happens when we expect things for free?;” “Ponz Supernova,” which looks at Bernard Madoff, and features exclusive jailhouse interviews with Madoff himself; “Damned Spot,” a series that examines the afterlife of places defined by tragic events; “West Cork,” a true crime series about an unsolved society murder, set on the south coast of Ireland (aka Amazon’s attempt at “Serial” fame); and “Extra Credit” with Neal Pollack, which involves the author, musician and comedian takes his 13-year-old son’s education into his own hands.

These shows will be arriving on the platform in the “coming months,” the company notes.

Audible Channels also organizes some of its content into 20 Audible Playlists, like the “essential stories of the day,” meditation, as well as commute-sized comedy, and compilations on science, history, technology and more.

Audible was careful not to call its new audio shows “podcasts” at the time of its launch. Explained Audible SVP of original content Eric Nuzum, Audible didn’t want to alienate or limit its audience. Many people are familiar with the term “podcasts,” but don’t think of themselves as podcast listeners. However, that’s basically what these programs are – though with more of a focus on short-form audio. Podcasts often require more of an investment of your time.

At launch, Channels was made available to current Audible subscribers for free. But otherwise, it’s available as a subscription service for $4.95 per month (or $59.40 per year).

Amazon Prime members won’t have to pay for Channels, starting now. Access to the programs is available through the Audible application for iOS, Android, and Windows 10.

This is the first time Amazon has really leveraged Audible, a company it acquired by in 2008 for $300 million, in order to boost its Prime membership numbers. While it had made discounted trial subscriptions to Audible available at times, it never actually gave away Audible’s content for free like this.

The rollout of free audio comes at an interesting time for Amazon, as its voice-powered platform Alexa is really taking off. Audible Channels and free audiobooks are just the sort of programming it makes sense to offer on Alexa devices, like Amazon’s Echo speaker and others. That could be the little extra nudge customers need to either buy an Echo speaker, subscribe to Prime, or both.