There’s all manner of advice and guidance on the web for online publishers looking to optimize their social media efforts.

CoSchedule, Fast Company, HubSpot, ShortStack, Forbes, Hootsuite, QuickSprout and others all claim to have the answers to such seemingly simple questions as “When is the best time to post on Facebook?” and “How often should you post stories on Facebook?”

However, many of the strategies used by publishers for optimizing engagement and boosting referral traffic from social are flawed. Using data from leading publishers, we will dispel the myths and demonstrate that there are no universal “best times” to share content on Facebook.

We analyzed the median traffic that articles received from Facebook three hours after they were shared. Using the median for all stories and a year’s worth of data helped ensure the analysis wasn’t skewed by outliers. Our analysis garnered some fascinating discoveries.

Firstly, when we compared three major publishers of national and international news based in South America, France and the U.K., we found significant variance in the shape of the traffic profiles for each publisher. 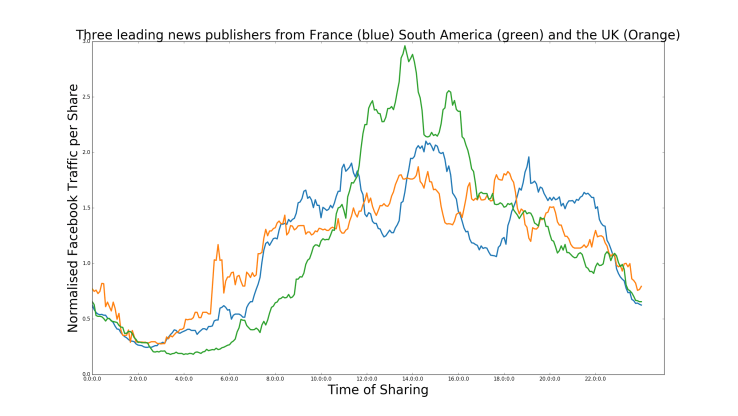 As can be seen in the above chart, the South American publisher achieved best performance when sharing between 11am and 4pm, and poor performance at other times. The British and French publishers, meanwhile, achieved more consistent results throughout the day, although both experienced peaks in referral traffic at different times.

It’s clear there is no one-size-fits-all approach for publishers, even if they are in the same category — optimal times vary depending on the location of the audience. One explanation for this could be that daily routines and behaviors vary between countries and cultures, which therefore impacts media consumption patterns.

The natural next question is whether there are country-wide best times for posting stories on Facebook. Could it be that readers in France all consume content more consistently throughout the day than the South Americans? Can there be specific guides per country? 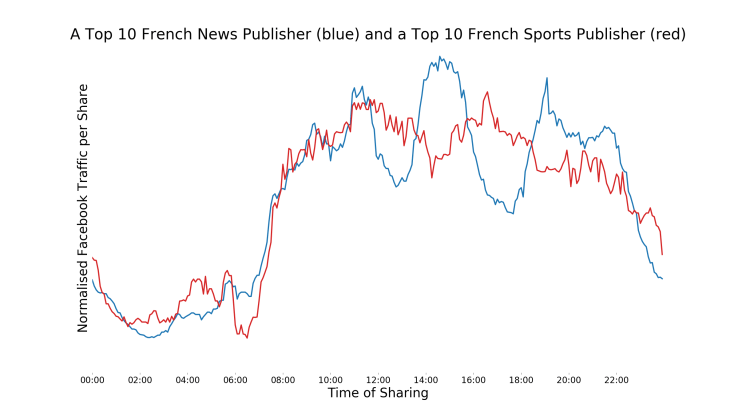 Overall, the sports publisher’s traffic is more consistent, with fewer dramatic peaks and troughs, while the news publisher has clearly demarked periods when more readers are clicking through to their stories. Even for two publications of equivalent size working in the same country, there are stark differences in audience behavior depending on the subject matter of the content.

We also compared two similar publications in the same country and looked at the traffic profiles of two top-10 French news publishers. There were still crucial differences — when one publisher experienced a peak in share performance at 11am, it is in fact one of the worst times for the other publisher to be sharing. 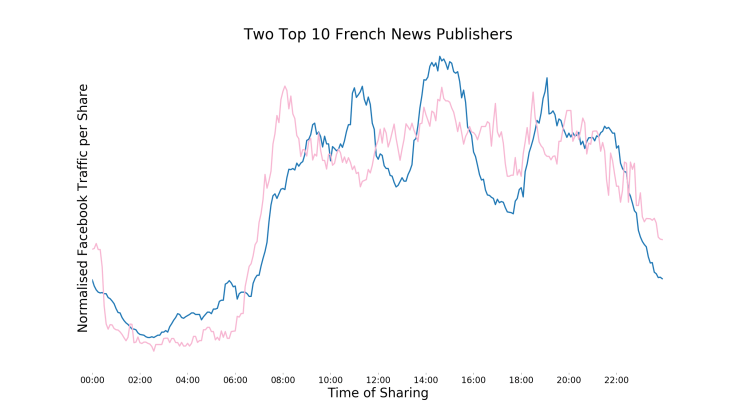 Interestingly, there also seems to be significant variance based on article topic. We looked at 220,000 Facebook posts made by our publisher clients between March 20 and July 10, 2016, and sorted them according to the time of day at which they were shared. We then compared performance of posts based on whether the articles were about sports or technology. All shares were obtained using local time, in order to compensate for time zone differences, then normalized by average client performance and volume. 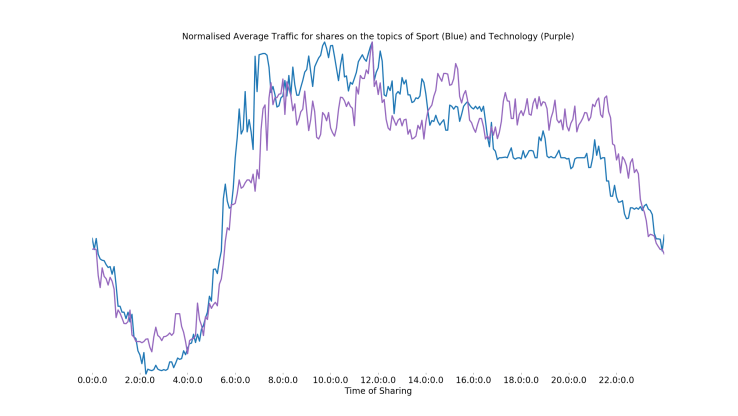 Again, there are important differences, and these nuances help us understand the characteristics of audiences and their varying appetite for particular content types at different times of the day.

But even these descriptions of the individual publishers do not do the subtlety of the data justice. To get the most accurate picture, a publisher would need to perform this analysis again on a real-time basis due to strong daily fluctuations. Indeed this is why many publishers now commit very significant resource to optimizing their performance — with large social media teams and even data scientists.